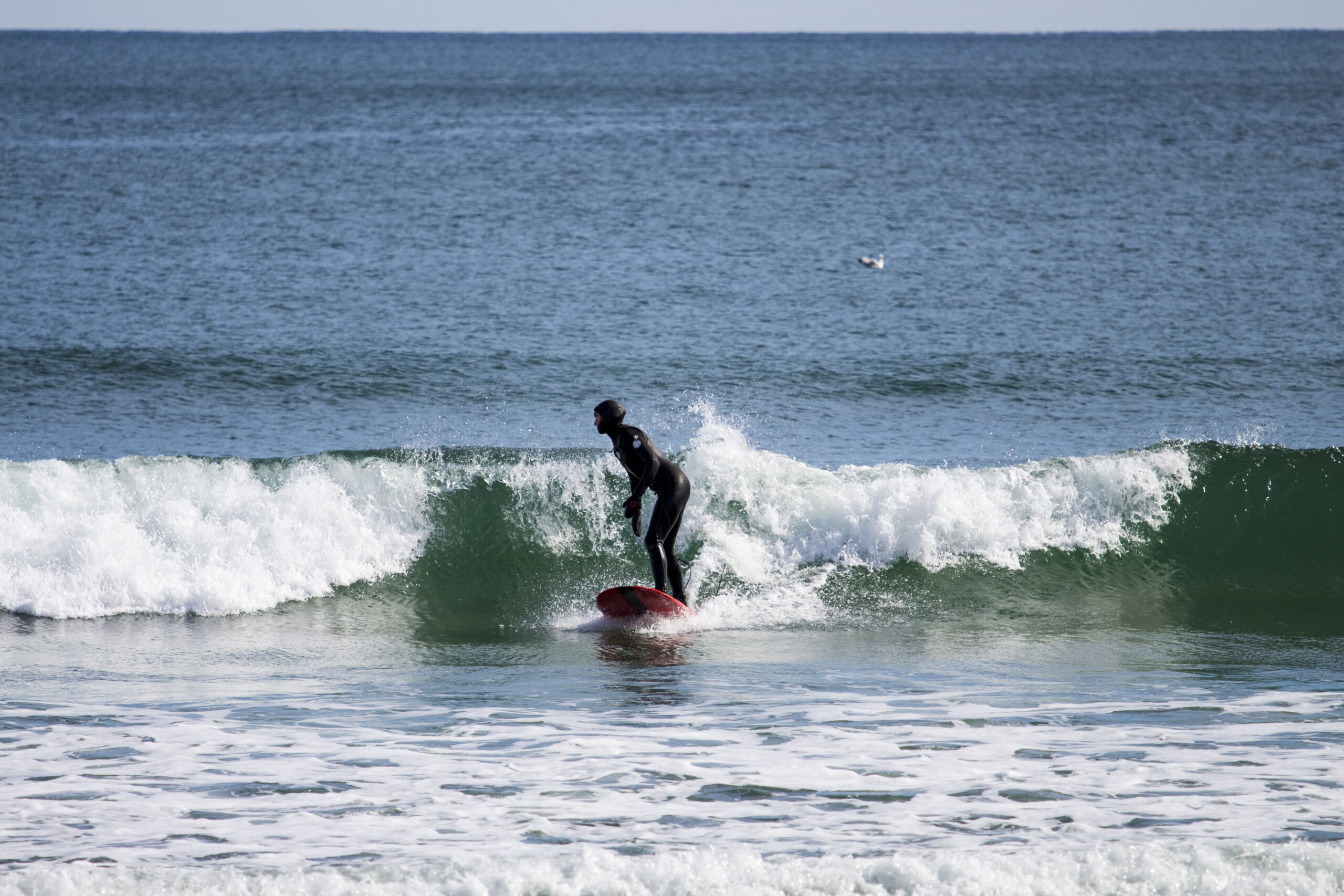 While most people are bundled up and sipping hot chocolate this time of year, the surf is still up for certain Rhode Islanders. Photo by James McIntosh.

For many, surfing is a hobby, passion or sport, but Narragansett Surf & Skate Head Clerk Tricia Panagiotis considers it a disease.

“You catch it and then that’s it,” Panagiotis said. “You know if you’re really into it if you don’t want to get out of the water; you know, you’re freezing, your jaw is chattering and you’re like ‘oh just one more, just one more.’ And once that happens, you’re pretty much ruined.”

Tricia was introduced to surfing through her father, Narragansett Surf & Skate Surf Sales Manager Peter Panagiotis, at the age of 11 and said she was afraid at first but has grown to love the sport. Peter also started young at 13 years old with a friend of his who introduced him to the sport.

Even through the colder months, these surfers wetsuit up to brave the water at Narragansett Town Beach.

To get in the winter water, you’ll need a five to six millimeter wetsuit, seven to eight millimeter boots, five to seven millimeter gloves or mittens and a hood so that only your face is showing. According to Tricia, you warm up a thin layer of water between you and the suit to keep warm.

To surf, you must possess a surfboard, a bathing suit and the ability to do a push up. A beginners surfboard will range from $300 to $400, according to Tricia.

“Whenever you want to start surfing, the bigger the board the better,” Tricia said. “Because the bigger the board, [it] has more float, so that’s what’s going to get you into the wave; so a longer board or at least a mid-range in size, something with a round nose and a lot of volume, because you want float and stability.”

However, if you are interested in learning how to surf, Tricia advised that this time of year might not be the best to start in.

“For the average Joe, I wouldn’t start during the winter,” Tricia said of learning how to surf. “Because you have to really get used to wearing a wetsuit.”

This, for one’s first time surfing, wouldn’t be the most pleasant experience as the suit might be uncomfortable to get used to.

With people out of work and attending online or asynchronous classes, Tricia and Peter have seen an influx of surfers this year. The two agreed that this has been one of, if not the most busy year regarding surf camps run at Narragansett Surf & Skate Shop.

Tricia said this was due in part to the notion that surfing is a generally-accepted socially distanced activity, and that kids needed to be able to socialize with others in some capacity as classes went virtual.

Narragansett Town Beach is a good place to learn how to surf because of its shallow sand bar and because of where the waves break, according to Peter. Peter said these waves aren’t the best for “quality surfing” most of the time, though, because they sometimes tend to crash right on the beach instead of further out in the water.

Tricia said that a majority of her friends today are those she surfs with. When surfing is your interest, Tricia said that it is your number one interest and you tend to run with that crowd of people.

The all-encompassing sport of surfing is something you just won’t be able to let go of once you get a taste, according to Peter.

“Surfing is like a religion; once you get into it, you’re addicted for life,” Peter said.