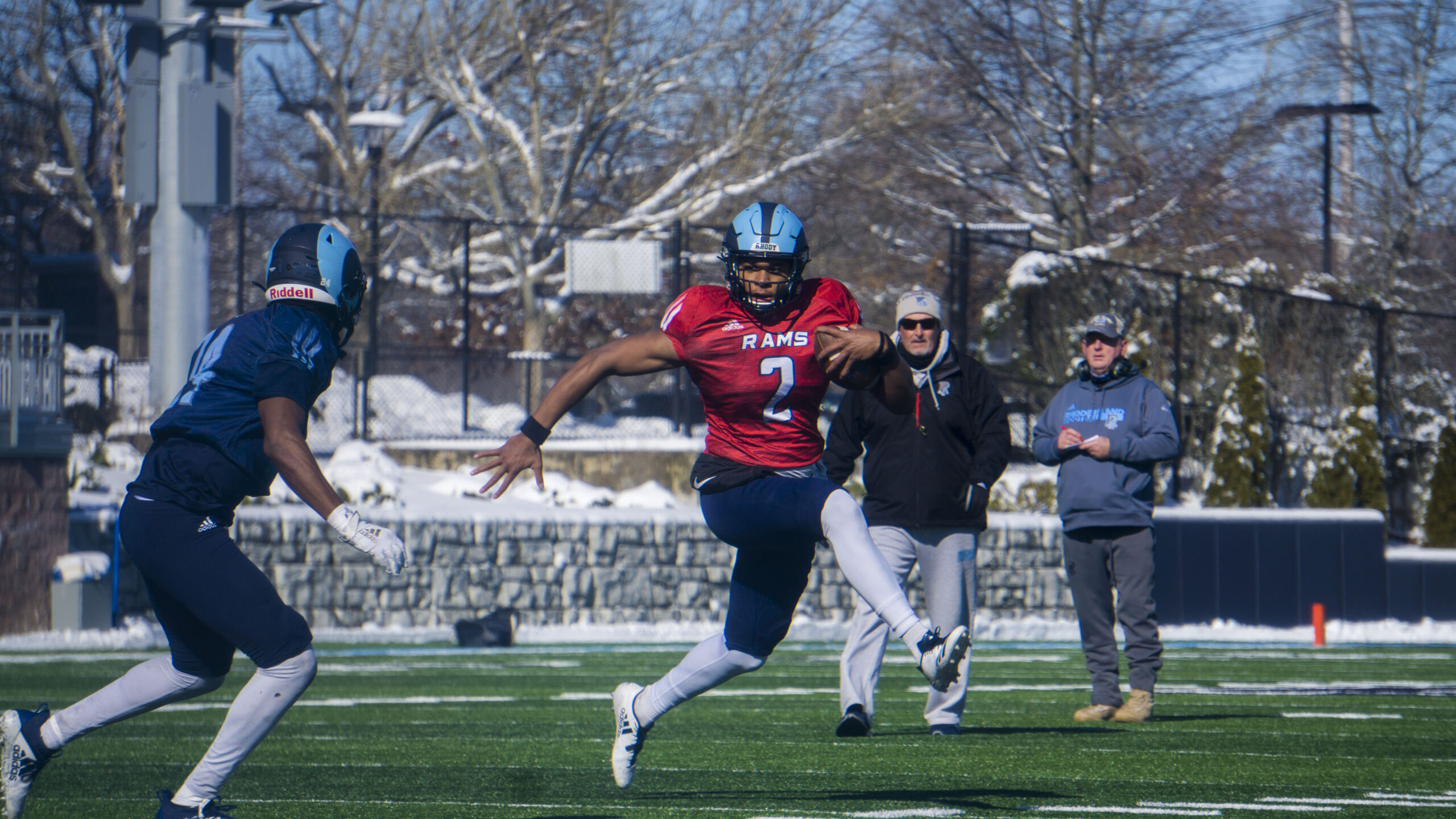 The URI Football Team is gearing up for their first ever Spring season. Photo by James Singer.

After a year-and-a-half-long hiatus and lots of hard work to stay healthy, the University of Rhode Island Football team will be tackling the field this spring and taking full advantage of the opportunity to play.

With new faces all over the field, Head Coach Jim Fleming is not sure what his team will look like, but he is very proud of his team for earning the opportunity to play football.

“It has been a really weird year for everyone in the program, but I give so much credit to my guys,” Fleming said. “They have worked so hard to get on the field, and play football, and they deserve this opportunity.”

Last season, the Rams finished with a record of 2-10 due to the slew of tough opponents in their schedule coupled with a defense that only contained one opponent to fewer than 27 points. However, Rhody was able to send three of its offensive standouts to the NFL: left tackle Kyle Murphy (New York Giants) and wide receivers Isaiah Coulter (Houston Texans) and Aaron Parker (Dallas Cowboys).

Coulter became the first Ram since 1986 to be drafted into the NFL after finishing his three-year Rhody career with 1,855 receiving yards, 1,039 of which came in the 2019-20 season.

The team will look to build on this foundation in the 2021 season from its mixture of key returners and the new talent coming in.

Important returners on offense include redshirt senior running back Zoe Bryant Jr, senior wide receiver Ivory Frimpong and junior tight end Caleb Warren. All three were key contributors to the high-powered Ram offense in 2019 and will look to build off of their performances this season with increased offensive roles.

In addition to these returners, 19 new freshmen have been added to bolster the squad on both sides of the ball. Wide receivers Jay Jay Williams and Jamall Mensah will look to fill the void left by Parker and Coulter.

The most important matter on offense,, hasn’t been decided yet – who will be the teams starting quarterback. Two freshmen, Jared Heywood and Jackson Burkhalter, have been added to a depth chart at the QB position. Kasim Hill, a transfer from Tennessee, is the outsiders favorite based on his past Division I experience.

On top of all the personnel changes, there have been notable changes within the coaching staff. Will Fleming, former URI offensive coordinator and son of Coach Jim Fleming, will not be returning for the 2021 season, nor will Defensive Coordinator Pete Rekstis. In their place are coordinators Pat Murphy and Jack Cooper for the two vacancies, respectively. Murphy previously was the offensive coordinator for an explosive Holy Cross team and will look to build on that with Rhode Island. Cooper has spent his last two seasons as the Defensive Quality Control Coach at Nebraska and takes his first coordinator position at Rhody.

As well, defensive coaches Chris Lorenti and Umberto Di Meo have been added to try and bolster a defense that came seconds away from numerous wins in the 2019-20 season.

“The new coaches have done a great job this past year with the teaching aspect of football through zoom and with getting acclimated to the program,” Fleming said when asked about his new staff. “But it is hard to say until we have coached a game together.”

While there are changes throughout the program and throughout the college football landscape, Fleming is excited to see what this year’s team can do.

“We are very confident that we can put the whole thing together and put out a really good football team,” Fleming said.

The Rams will begin their six-game regular season on March 13 when they head to Philadelphia to play the Villanova Wildcats. Kickoff is scheduled for 1 p.m.