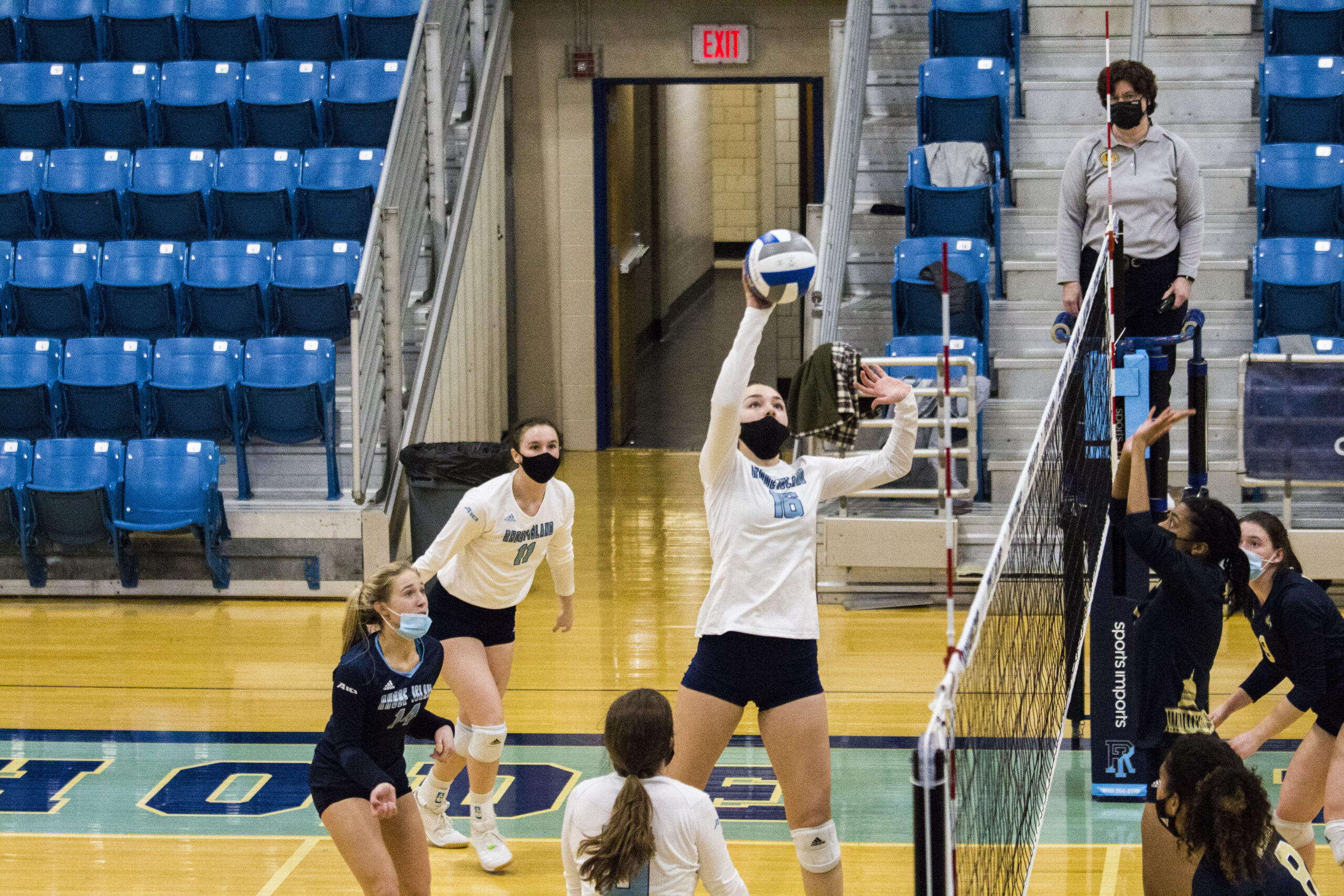 The University of Rhode Island Volleyball team split its set of games last week as it continues their anything-but-normal spring season.

The team was coming off a dominant 3-0 victory against Merrimack where the Rams dominated from start to finish. This performance carried over last Saturday when the URI swept George Washington University 3-0 to capture their second conference win of the season.

Rhody was in control of the first two sets in the match, winning 25-20 and 25-16. The Colonials put up a fight in the third set taking a 7-4 lead early on, but the Rams would climb back into the set to tie the score at nine before GW called a timeout. After the timeout, the Rams poured it on the Colonials with a 16-6 scoring run to capture the third set and win the game.

Head Coach Nicki Holmes expressed how proud he was seeing the resiliency of his team in the final set.

“We talk a lot about who we’re going to be and our identity and then we frame it as if we don’t care about the score as long as we act accordingly,” Holmes said. “No matter if we are down [or] up whatever the score is, we are going to be who we are, and I thought they did a really good job solidifying their identity, picking their battles and figuring out what they wanted to be in those moments”

Saturday’s game also marked the first time that Holmes faced his former school. Before being named the head coach at Rhode Island last January, he spent the previous three seasons as the associate head coach at George Washington.

“I think for myself and [Assistant Coach] Jordan [Young], when you spend time with people and when you do this emotionally and a lot, you get to know people,” he said. “It’s cool to compete in this COVID environment, but to see people you know and respect and love across the net, it’s really cool.”

On Wednesday afternoon, it was a different story, however, as the team fell 3-1 to St. John’s, ending their two-game winning streak.

The Red Storm attack proved to be too lethal for the Rams early on as the team hit .426 and outside hitter Rachele Rastelli racked off 12 of her season-high 25 kills in the first two sets.

The Rams eventually settled into the match putting together an 11-6 lead early in the third set. St. John’s climbed back to cut the deficit to 15-13, but that was as close as they would get. Rhody went on to win the set 25-17.

The two teams continued to go back and forth in the fourth set. After a kill by St John’s Jovana Askovic to tie the score at 14, the visitors rang off four consecutive points to go up 18-14. URI was able to rally and get it within two at 23-21, but it wasn’t enough as the Red Storm went on to win the set and the match.

Coach Holmes spoke postgame about how proud he was to see the way his team played during the final two sets.

“I feel really good about them because of the way they came back,” he said. “I was more concerned [in the first two sets] with the things we talked about this week. We call them ‘small rocks’ of what we want to work on and I think you can see how they improved on those processes.”

Claire Chaplinsky finished with a double-double for URI, recording 16 kills and 12 digs followed by Zoe Staats, who finished with nine kills.

The Rams return to conference play this Sunday when they take on the La Salle Explorers in Philadelphia. The game is scheduled to begin at 1 p.m.