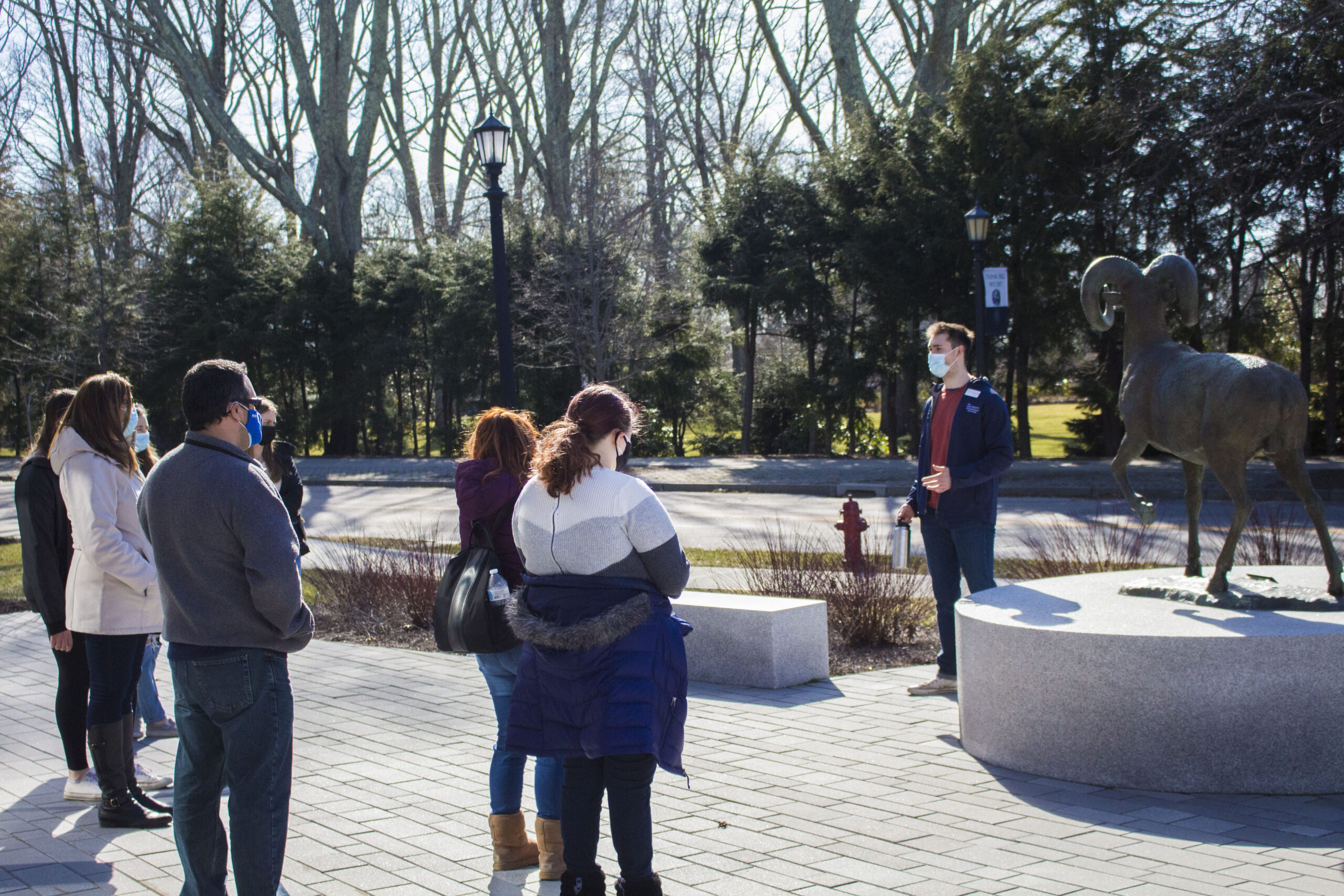 As COVID-19 has been gradually controlled, the University has reinstated in-person tours with some changes. Photo by James McIntosh.

The University of Rhode Island is telling prospective students to mask up, get tested and sign up for small, abbreviated campus tours between now and May 1.

Before COVID-19, campus tours were around an hour and a half long, conducted with 30-person groups and visited a plethora of buildings on campus, including the Memorial Union, Mainfare Dining Hall and multiple residential buildings. However, due to the pandemic, tours were canceled, as they were no longer safe. Tours resumed on March 1, forcing the University to modify the experience.

Erin Earle, associate director of the campus visit experience and welcome center, said that the University began by researching how they could provide admitted students an opportunity to visit URI while following COVID-19 guidelines.

“We paid a lot of attention to what the state of Rhode Island was saying about visitors in Rhode Island because we obviously need to comply and support anything that Rhode Island is doing,” Earle said.

Guided tours are essentially the same as before, according to Earle, only without being able to visit residence halls. Instead, there is a mock dorm room in the Welcome Center so incoming students can get a feel for what the residence halls are like.

The University consulted members of the University and looked at data from other schools who have also resumed in-person guided tours, which led them to believe that leaving most of the tour the same is safe, Earle said.

“Everybody at the University understood the importance of [guided tours],” Earle said. “The thing that I like most about our school is that we use information and data to make decisions. We talked to the director of Health Services a lot about this, senior leadership at URI, President Dooley and his group looked at it. Obviously, the folks at admissions, enrollment management and the COVID task force were involved in the decision.”

Earle said that when Rhode Island started allowing people who tested negative within 72-hours to visit from states with over a 5 percent positivity rate, the University green-lit in-person tours. Those who have been fully vaccinated can visit without testing if it has been over 14 days since they received their second dose, according to him.

Because URI students are able to get tested for COVID-19 whenever they want, the University feels secure in allowing visitors to come onto campus because enrolled students have resources to maintain their health, Earle said.

The University believes that campus tours are critical to the college decision process, so administrators have also looked at how other universities across have gone about reinstating them.

“A lot of schools had gone back earlier than us, so we had a lot of good information about how to do it safely, what restrictions to put forward, how to communicate with the families [of visitors] to make sure that everybody is being safe,” Earle said. “That was a big thing for us, seeing it be successful at other schools and knowing that we could do it well.”

Earle said that safety precautions include only allowing admitted students to visit, limiting each party to two guests, lowering tour groups to nine people and scheduling tours for every 30 minutes to minimize crowds in the Welcome Center.

In addition, they have changed the tour route, cutting it down to approximately an hour. According to Earle, tour guides have cut down the number of buildings they’re bringing students into. The University has also provided tour guides with microphones so they can stay at a safe distance from the visitors.

Molly Cronin, a first-year tour guide, said that she believes the new abbreviated tours are just as effective as the tour she went on as an incoming student before COVID-19.

“Tour guides aren’t allowed to bring visitors inside many buildings, unlike when I went on my tour of URI last year,” Cronin said. “However, they’re basically getting the same experience. The only thing on the tours that really changed is that we stay away from large numbers of people. Visitors still walk by all of the buildings, and we’re there to, of course, give them more info about the parts they don’t get to see for themselves.”

The University has held virtual residence tours for incoming students, and Earle is hopeful that these tours will help generate excitement for students coming to URI in the fall.

“We’re really optimistic,” Earle said. “We think that URI is such a great school and students will still see that.”