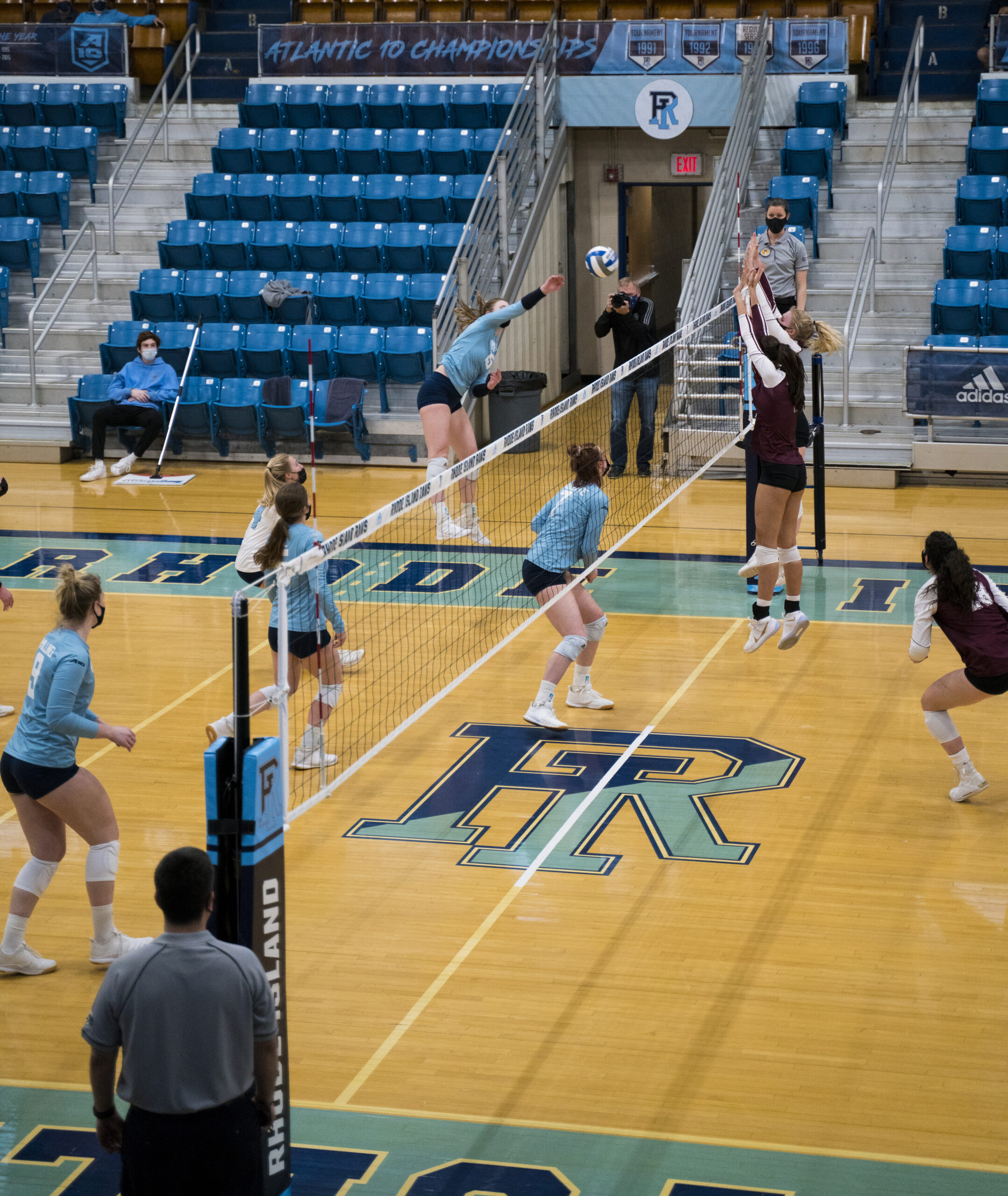 The Rams swept their weekend slate at Keaney Gym to make the A-10 Conference Tournament. Photo by Ethan Pellegrino.

Facing the prospect of their season ending earlier than intended, the University of Rhode Island’s Volleyball team took on conference foes La Salle and Fordham this weekend, needing to win both to make the Atlantic 10 conference tournament.

Rhody was able to continue their winning streak, beating La Salle 3-1 and sweeping Fordham 3-0 to clinch the third seed in the A-10 tournament.

Rhode Island first took on La Salle on Saturday at home. The Rams dropped the first set 25-18, but came back to win the second set 25-17.

Senior Claire Chaplinski finished with 13 kills, including a vital kill in the third set to keep the Rams alive. Fellow senior Natale Zanellato capped off the set with a kill of her own and the Rams took the set 25-23 and gained the 2-1 advantage heading into the fourth stanza.

The Rams jumped out to a quick advantage in the fourth set, going up 12-5 to start behind three consecutive aces from freshman Samantha Blahut. La Salle, however, stormed back to take a 21-18 lead. After a brief comeback from the Rams to tie it at 21, the two teams went back and forth until, eventually, the Rams took the set 27-25 and won the match 3-1.

Rhody then took on Fordham in their last game of the season and the Rams’ Senior night. A loss meant the Rams would miss the postseason, but a victory meant they would clinch the third seed out of four in the conference tournament. The two teams split their previous two matchups, so it was set up to be a thriller.

After going down 2-0 to start the game in the first set, Rhody dominated the rest of the way, going on a 7-2 run and never looking back. Chaplinski racked up five of her game-high 15 kills in the set and the Rams took it 25-23.

The second set was a different story for Rhody, as Fordham went up 15-8 to start off. The Rams came storming back, however, eventually tying the game at 18 before Rhody later won the set 27-25. Blahut had a key block to end the set, and her weekend performance saw the freshman earn A-10 Rookie of the Week honors for the second time this season.

The third set came down to the wire, with the two teams going back-and-forth for the entire set. It was tied at 20 points when Rhody turned it on and scored four straight to clinch the match point. Chaplinsky finished the match with a kill and the Rams emerged victorious.

For an even further increase in the drama department, the Fordham game had the highest of stakes for the seniors, as it was their senior night and potentially the last game of their careers.

”This game meant everything to us,” said Chaplinsky, who was one of four Rams honored on Sunday. “It was, potentially, my last game at Keaney, and we knew the consequences if we lost.”

Head Coach Nicki Holmes, who just completed his first regular season as head coach for the Rams, had nothing but praise for his group, who he feels has really hit their stride due to the leadership of his seniors.

“I am so proud of the way our seniors handled themselves and led by example,” Holmes said. ”When I came after two coaches in a year, they could have easily laid down and given up their last year, but they smiled in the face of adversity and inspired the girls to buy in to what we have here. They made everyone believe that we could do this and look at us now.”

When Rhody takes on second seed Virginia Commonwealth University on Friday in the semifinals of the Atlantic 10 tournament where they look to keep the energy and focus at a high level. The key, Holmes said, is to “continue to have that confidence in ourselves. We know we can compete with anyone.”

The winner of URI and VCU will play the winner of Dayton vs. Fordham on Saturday. The mini-tournament will be in Frericks Center in Dayton, Ohio. Whoever wins the conference tournament will get an automatic bid to the NCAA Volleyball Championship held later in April.