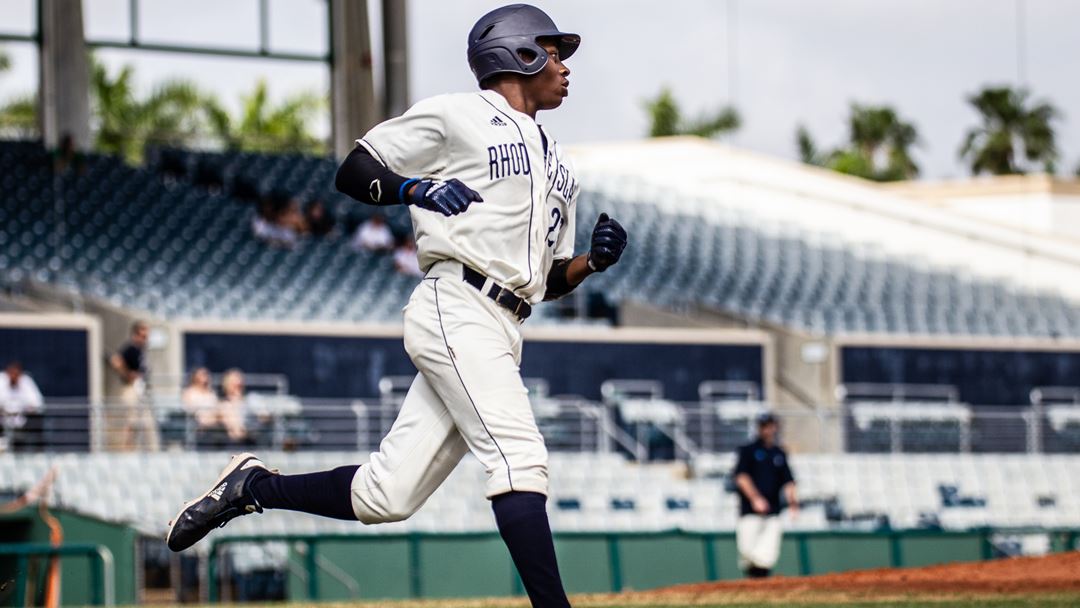 Mark Coley and the Rams lost in heartbreaking fashion to both UConn and Army this past week. Photo via gorhody.com.

The Rams dropped their first two games vs. the Huskies, losing 9-6 on Friday and 3-2 in a crushing, 13-inning loss during the first game of Saturday’s doubleheader. Rhody was ultimately able to close out the series with a victory, winning 6-4 to avoid the sweep.

According to Head Coach Raphael Cerrato, struggles at the plate and the inability to close games haunted Rhody the most during their series vs the Huskies.

Friday’s matchup saw Rhode Island leading 5-2 midway through the fifth inning, in large part due to a three-run home run by junior first baseman Xavier Vargas. UConn stormed back, however, scoring seven straight runs to take the first game of the weekend.

“We had an opportunity to extend the lead and we didn’t,” Cerrato said, citing struggles from the defense and the bullpen down the stretch. “It was a disappointing end to the first game.”

After trailing by two runs to start off game one of the doubleheader, the Rams responded with two runs of their own late in the sixth inning. However, the Huskies ultimately took the game on a walkoff home run to close it out after a seven-inning scoring drought.

Cerrato credits the “phenomenal” pitching in the losing effort, as both Zach Fernandez and Mike Webb only gave up three runs the entire game.

“If you give up three runs and 13 innings, you should win the game,” he added.

The final game of the series saw both teams go back-and-forth, with four total lead changes throughout. UCONN found themselves leading 4-3 after six innings following some key defensive mistakes early on from Rhody.

The Rams were later able to bounce back with a three-run outing in the eighth inning, ultimately putting them on top for good and giving them a win to close the series.

“I think we have a really tough, scrappy team,” Cerrato said on his team coming back to win the final game. “A lot of teams, I think, would have just folded.”

One of the bright spots at the plate during the series was Xavier Vargas. Despite some struggles earlier in the season, he was able to hit four home runs during the three-game stretch, including the opening two runs in the Rams’ win on Saturday to close out the series. Vargas hit his first homers of the season vs the Huskies, making it a career tally of 13 for the junior from Woodhaven, New York.

“He got some good pitches to hit and he didn’t miss them.” Cerrato said. “He was huge. If it wasn’t for Xavier, we definitely do not win at all.”

Rhode Island looked to stretch their winning streak to two games with a Tuesday clash vs Army at West Point, but they again weren’t able to finish out the game. Rhody scored the go-ahead run in the top of the eighth inning from a Mark Coley double, but the bullpen blew a save opportunity. The Black Knights, managed by former URI Head Coach Jim Foster, scored two runs in the ninth inning to secure a walk-off victory. Tuesday’s defeat has Rhody sporting a 10-10-1 record.

The Rams are now looking ahead to another three-game series, this time facing Northeastern University. They will meet the Huskies at Bill Beck field in Kingston on Friday before traveling to Boston for a doubleheader on Saturday.