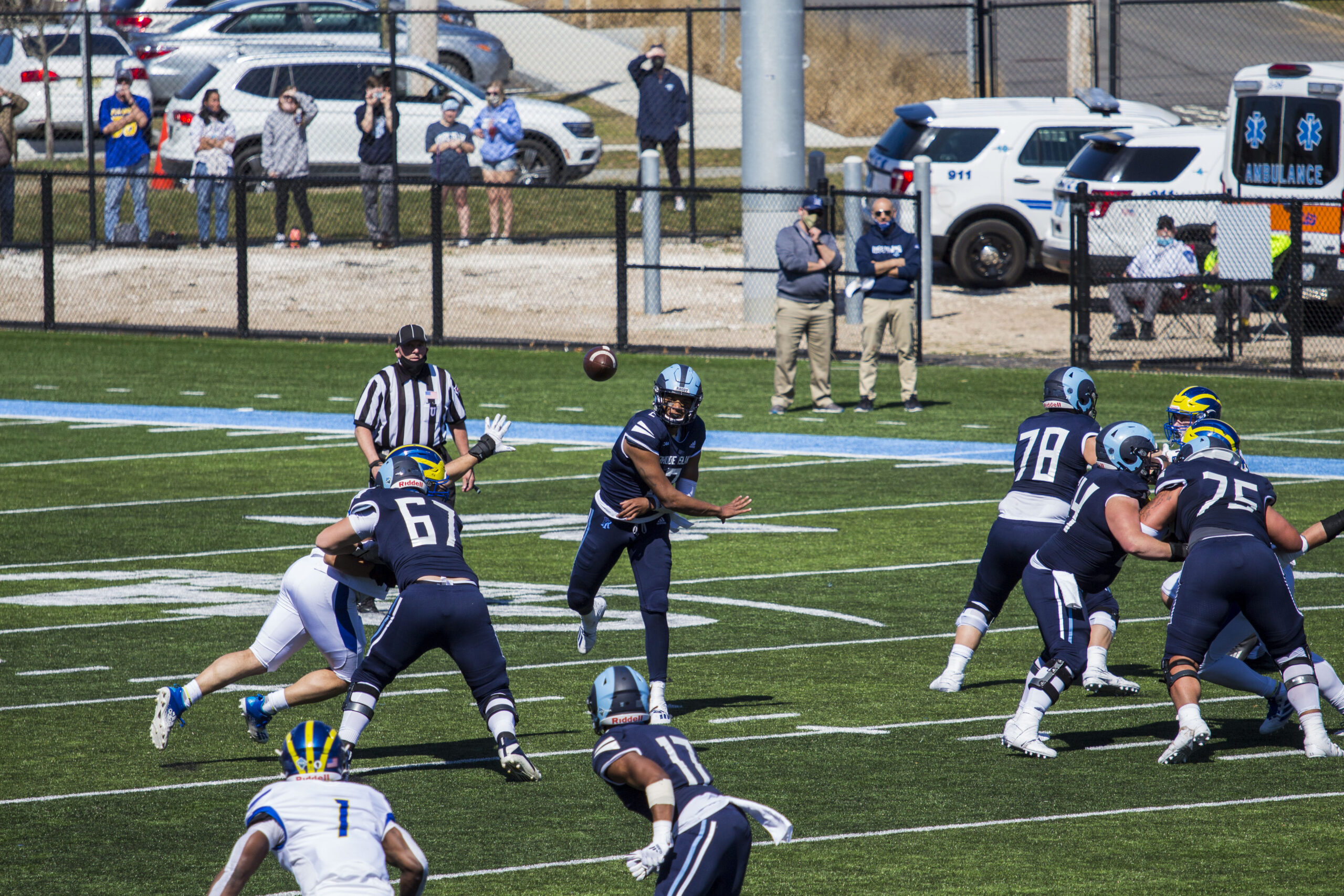 Rhody couldn’t get much going on offense in a home defeat to Delaware. Photos by James McIntosh.

Meade Stadium’s first football game since October 2019 wasn’t the outcome the limited number of fans inside the stadium on Saturday wanted, as the University of Rhode Island suffered a 35-21 defeat to the University of Delaware.

Rhody lost the battle at the line of scrimmage on both sides of the ball, with the rushing yardage statistics tilting heavily in favor of the Blue Hens. The visitors ran for 361 yards, highlighted by Dejuon Lee accounting for 221 yards on only 22 carries. Head Coach Jim Fleming spoke after the game about UD’s ability to dominate in the rushing game.

“At the end of the day, I think we got a little worn down,” he said. “You gotta stop the run to win football games, and they did a good job of that.”

Although Delaware controlled the time of possession with 41:34, it was two explosive plays by Lee that summed up the afternoon for the Rams. On fourth-and-1 from URI’s 35 yard line, the redshirt senior burst up the middle for the opening points of the ball game. A similar situation occurred in the fourth quarter, with Lee running right between the gut of the offensive line for a 74-yard score as part of the third-most rushing yards in an FCS game this season. The performance from Lee, who ended up with 275 all purpose yards, earned him Colonial Athletic Association (CAA) Offensive Player of the Week.

The loss dropped the Rams to 2-1 on the season, and the team squandered the chance to move into first place in the CAA North Division. Rhody did well to score 21 points on a team that only gave up three all season heading into the contest, but sustainable drives could not be found. Only three of their 11 possessions lasted longer than two minutes, resulting in the defense getting increasingly worn out as the game went along.

Quarterback Kasim Hill predominantly played the first two games of the season, but new Offensive Coordinator Patrick Murphy incorporated redshirt sophomore Brandon Robinson more into the team’s game plan this time around. The transfer from South Orange, New Jersey led two touchdown drives for the home team, both on rushing touchdowns by the backup quarterback. Robinson finished with a team-high 85 passing yards, but a big chunk of them came on one play when he found Ed Lee for a 62-yard connection.

The catch was the longest of Lee’s career, but it came at a cost: the redshirt junior was injured on the play and did not return to the game.

Junior tight end Caleb Warren led Rhode Island in catches with four on the day as leading receiver Ivory Frimpong was held without a grab. Freshman Jamall Mensah caught his first two catches of his career, with his second being a touchdown in the fourth quarter. His first catch wasn’t as successful though; Mensah fumbled after a one-yard catch on the team’s opening drive.

Rhode Island only finished with only 221 yards of total offense, but Coach Fleming said after the game that Hill is still the team’s starting quarterback. According to his head coach, Hill’s performance on Saturday coincided with an untimely bout of a non-COVID related illness earlier in the week, affecting the offense at large.

“We just didn’t have enough sparks to get ourselves in rhythm,” he said. “The entire offense we need to reevaluate everything. Not burn it down, but we just got to play better.”

Even though the Rams are in second place in the CAA North division halfway through the league’s season, tough tests await. Rhode Island had their bye week sandwiched between a since-cancelled game vs. Bryant and their conference opener vs. Villanova, so they have to play six games in six weeks as of now. The CAA has five teams ranked in the STAATS Perform FCS Top 25 poll, and URI dropped four spots to number 22 in this week’s rankings following their loss.

This Saturday has URI returning to Meade Stadium where they’ll face off against the University of New Hampshire at 1 p.m. The Wildcats have had their last two games postponed due to COVID-19 protocols, so it remains to be seen if they will have enough available players for their trip to Kingston.