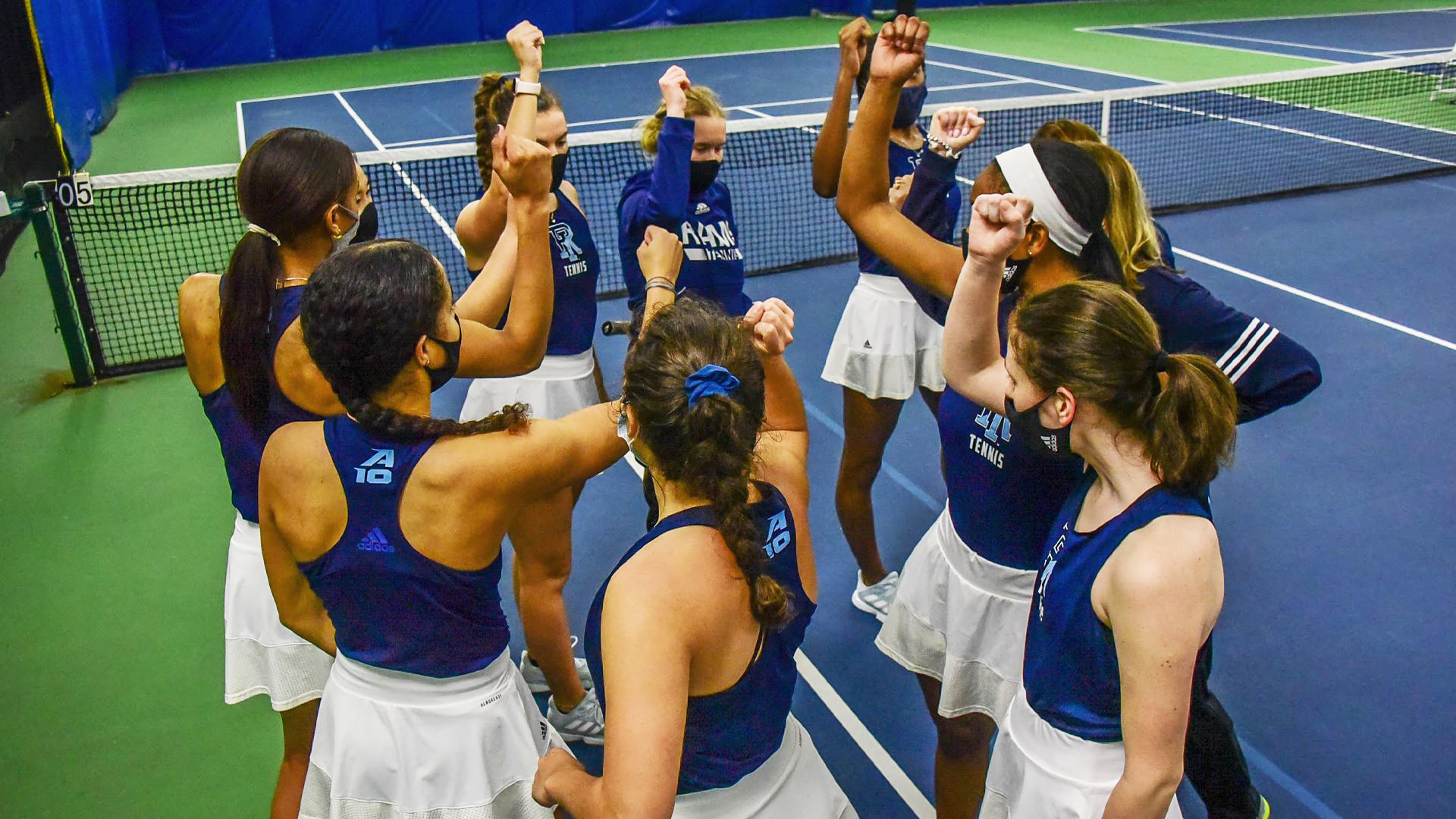 Rhode Island Tennis won their fifth match of the year on Sunday vs. St. Joe’s. Photo from Mike Scott via gorhody.com.

After four straight wins, the University of Rhode Island Tennis team was confident heading into their first Atlantic 10 match of the season on Sunday against Saint Joseph’s University at the International Tennis Hall of Fame, and the optimism led to a resounding sweep over the Hawks.

The doubles team swept their matches 3-0 starting with the duo of Halah Davis and Paulina Loredo. They started the day off on a good note with a 6-1 victory. Up next was Sydney Chriatian and Rachel Smilansky, who took their match 6-2. Closing out the doubles was Nadia Rajan and Erin Chratian, who took home the 7-5 win.

Head Coach Val Villucci was pleased by the performance and consistency the doubles teams have had in this match as well as their performances throughout the season.

“The doubles seem to be setting the tone for us right now,” said Coach Villucci. “We were able to take all three double matches which put us in a good place for the singles … they have improved dramatically.”

Even playing through an injury, freshman Gracie Campenella completed the sweep by defeating Hawks sophomore Sophia Amato, 6-4, 6-3. Coach Villucci was impressed by Campenella’s drive and toughness as she fought through the match.

“She was actually hurting a little bit before the match … As the match progressed .. her legs began to bother her and she started to cramp up,” said Coach Villucci. “She just pushed herself through the match and did what she had to do to take the win.”

With the Rams heading into the second half of the season, their spirits are high with a 5-1 overall record and 1-0 conference record. Looking back at the season, Coach Villucci is proud of how her athletes have performed, however, she said “there is always room for improvement.” She said she is focused on working with the athletes to eliminate unforced errors as well as challenging opponents during the matches.

In addition to progression in skill, the team has also had progression in team bonding and mental strength, which plays a huge factor in team success.

“They are becoming smarter players on the court and they are much more clear minded when they are playing,” said Coach Villucci. “They are jelling so well, I’m happy for them because it has been a long journey for them to get where they are now.”

Rhody will face the Bryant Bulldogs April 1 at Fore Court in Smithfield. This will be the second time this season the teams are competing, and the expectation is that it will once again not be an easy task.

“We have played them once earlier this spring and it was a very difficult match and close match. We are the ones with the targets on our back right now,” said Coach Villucci. “We are ready to step up to the challenge.”