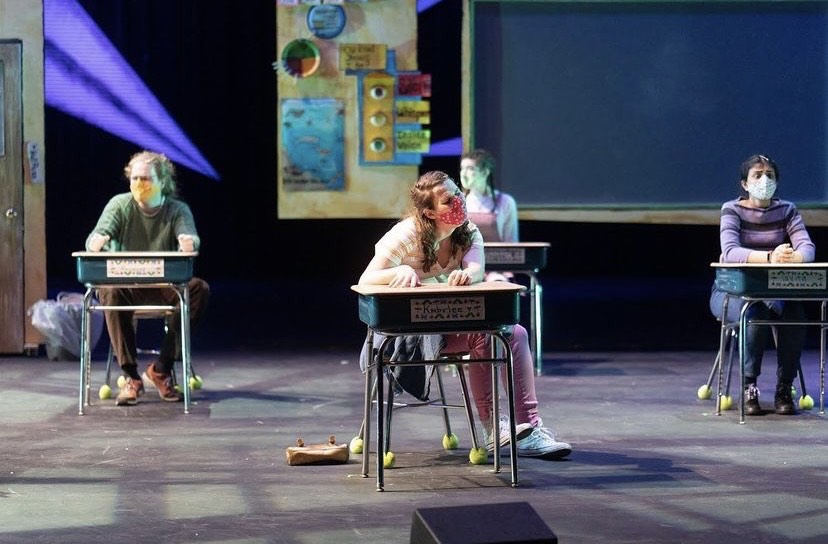 URI Theatre endures, albeit virtually, with their newest release “Miss Nelson is Missing”, which will soon be available to stream. Photo from URI Theatre Instagram.

The University of Rhode Island’s theatre department has successfully executed their first in-person mainstage production in over a year, “Miss Nelson Is Missing!” and plans to broadcast this show far and wide.

This stage adaptation of the popular children’s book under the same title is about undisciplined students whose teacher, Miss Nelson, gives them a valuable lesson of how to join together and mature as a class.

After a year of producing virtual radio plays, actors and stage crew at URI were able to assemble and professionally film the play together this past month. Although live spectators were not feasible, the show will be viewable by the public for a small ticket charge. It will also be showcased at over 400 elementary and junior high schools in Rhode Island free of charge.

This vision came to the show’s director Rachel Walshe after watching live captures of high-profile productions since the pandemic began. Since most students are now learning while socially distanced and wearing masks, she thought that doing a show set in school would work perfectly given the restrictions they needed to follow on set.

The content of this particular show is also personal to Walshe, being a mother of three who all experienced distance learning.

“My kids have their Zoom art classes, but in terms of having interactive experiences, those opportunities are not happening,” she said. “I thought this genre could be something that not only our students got to work on, but also a way that our students could give back to the community.”

Walshe also believes that the COVID restrictions provided a great creative challenge for the cast and crew. Students were inspired to dig deep and make every scene work uniquely.

Senior Allison Marchetti served as the show’s stage manager, and junior Omar Laguerre-Lewis played the character of Mouse. Both students initially felt those challenges when rehearsing for the production, yet slowly found the positive parts of such unusual circumstances.

“I definitely learned a lesson in not taking these experiences for granted,” Laguerre-Lewis said. “The fact that I could actually be on stage with people was great.”

As for Marchetti, her production duties occurred offstage. From managing attendance to calling the cues, she and her crew members were responsible for any behind the scenes details.

Marchetti said that she became more confident through this experience.

“Pretty early on, I just started to trust myself more and more,” she said. “At first, I felt like I was under a microscope since this was my first time stage managing, and because it was during COVID. I think that I gained confidence over time which will be valuable in the long run.”

Laguerre-Lewis and Marchetti both feel grateful to have been able to put on an in-person show during such trying times. Marchetti specifically thanked her fellow crew members for their dedication and for topping off her senior year.

Walshe is eager to release the finished filmed product to the public, especially to the young students who will view it in their schools. She feels fulfilled to have worked with such committed students on this show.

“It was always very rewarding to take a moment and take stock of what this resilient group of students were doing in the face of things that were very challenging,” she said. “To come in and find creativity at the end of your work day and on the weekends — that in it of itself is very rewarding.” The general public will be able to access the show through ShowShare via Broadway on Demand from April 25-30. More information will be made available in the coming weeks on URI Theatre’s website and social media pages.