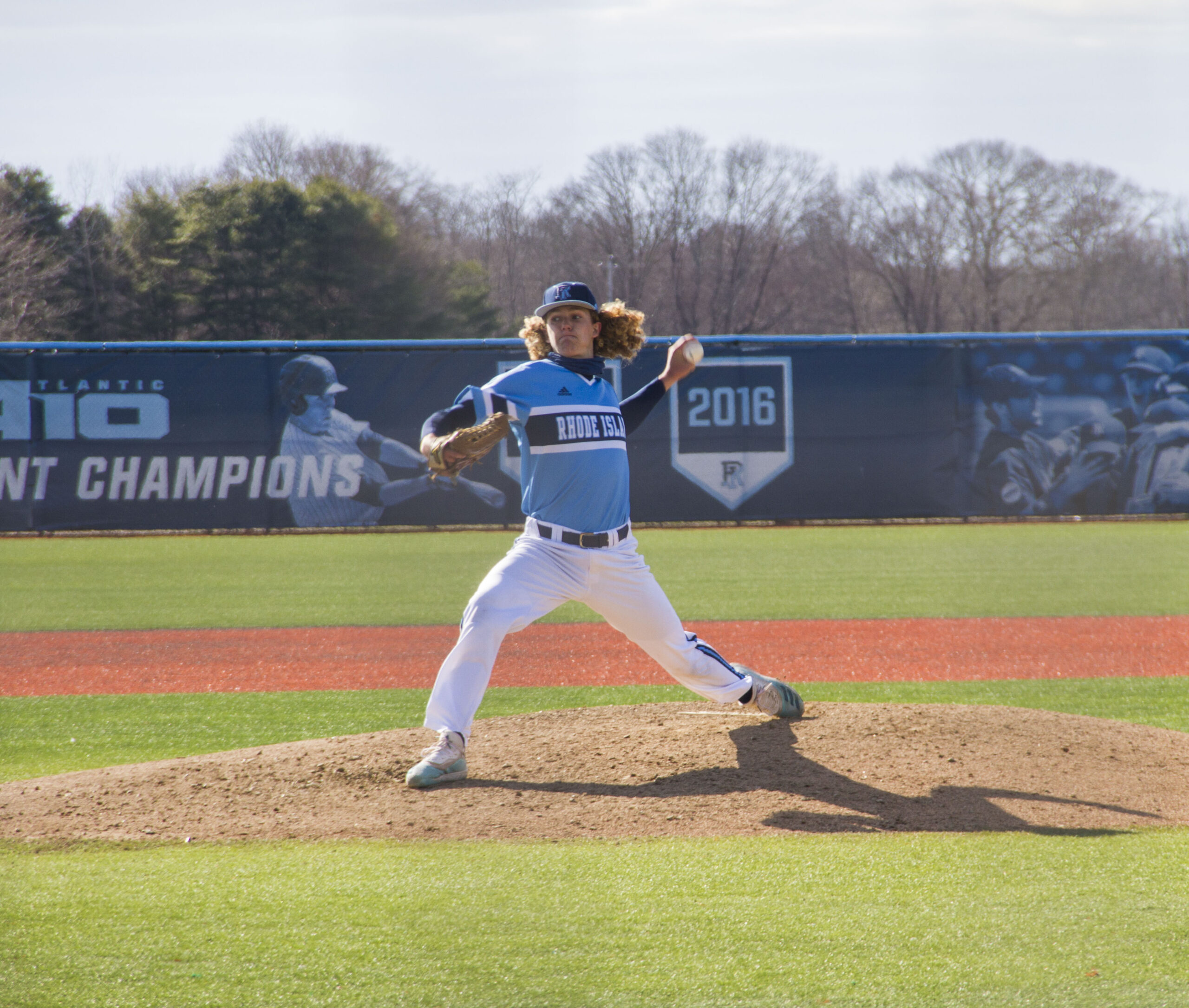 Strong pitching propelled the Rams on Saturday in day two of the series vs. La Salle. Photos by James Singer.

The University of Rhode Island Baseball team began Atlantic 10 play last weekend, finishing 2-2 in a four-game series against La Salle that moved their record to 13-15-1.

Rhody dropped the first game of the series on Friday. Despite having a four-run lead after six innings, the Explorers took advantage of three Rhode Island errors and responded with seven straight runs to close the game, winning 8-5.

After falling short in the first game of the series, the Rams took back the momentum, securing the victory in both games of  Saturday’s doubleheader. They won 4-2 in the first matchup, followed by a 12-6 effort in the second.

This series was led by multiple strong “phenomenal” pitching performances, according to Head Coach Raphael Cerrato. Saturday saw Rhody dominate on the mound through their starters across the two games, with graduate senior Mike Webb and freshman Domenic Picone pitching gems. Webb kicked off the day with eight strikeouts and no earned runs, while Picone threw a five-inning shutout and had nine strikeouts of his own.

Another highlight during Saturday’s doubleheader was junior Mark Coley at the plate. In game three of the series, the Bloomfield, Connecticut native was a triple shy of the cycle, but did reach base a fourth time after getting hit by a pitch. Coley also scored four runs in the latter half of the doubleheader.

To this point, Coley has faced a lot of adversity this season. A prospect in the upcoming MLB draft, he has missed time this season due to both injuries and COVID-19 protocols. Despite struggling early on, Ceratto says that his time away from the team has ultimately benefited him in the long run.

“I think that actually helped him to kind of reset himself mentally,” he said. “He’s really starting to play like the player he’s capable of being.”

The series closed out on Sunday with a 7-3 victory for La Salle. The Rams hopped out to an early 3-0 lead after one inning, but were held scoreless the rest of the way. A lack of consistency on offense doomed the Rams in the finale, an issue that Cerrato says the team had throughout the series. He also thought the team’s mindset heading into the final game of the series wasn’t in the right place.

“I think we expected them to roll over after sweeping them on Saturday, and they didn’t,” he said.

With conference play in the A-10 now underway, games will become even more important down the stretch for the Rams. Both Fordham and Saint Joseph’s have started the season strong, currently sitting with the top two winning percentages in the North division and holding winning streaks after last weekend’s play.

“They’re going to be two of the toughest opponents we’ll see in conference,” Cerrato said. “We’re going to have to play better than we did this past weekend.”

Only two teams each in the North and South division will advance to the A-10 Championships next month. For Cerrato and the Rams, getting to the postseason has been the primary focus all season long.

“That’s our goal, to get to the conference tournament.” he said. “We’ll be disappointed if we can’t get there.”

Rhody was set to face Fordham on Friday, but the team announced Wednesday morning that they will be forced to go on pause due to COVID-19. The team said no player has tested positive so far, but multiple players were forced to quarantine due to close contact situations. As a result, the team said they would not have had enough players to safely compete.