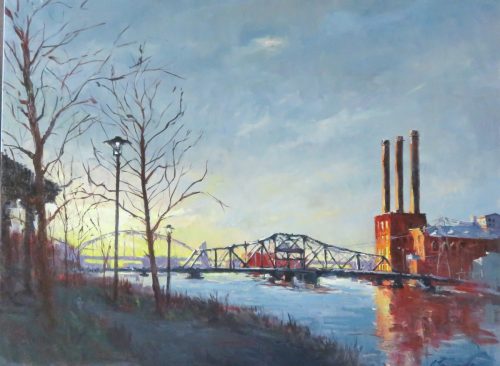 The Graduate School of Oceanography is showcasing an exhibit at the Providence campus featuring works from a youth and a professional art competition. Photo from uri.edu. Painting is by Anthony Tomaselli.

In honor of the University of Rhode Island’s Graduate School of Oceanography’s 60th anniversary, the program hosted a Youth Art Competition and Professional Art Exhibition at the Alan Shawn Feinstein Providence Campus.

The competition is running from April 5-29, and featured a Gallery Night on April 15. The exhibit features artwork focused on oceans from professional artists and K-12 students in Rhode Island.

A virtual tour of the exhibit was also featured on YouTube, narrated by Steven Pennell, the marketing and communications chair of the Urban Arts and Culture Program of the University’s Alan Shawn Feinstein College of Education and Professional Studies.

Participating artists were instructed to draw what the ocean means to them as a Rhode Islander, according to the competition’s website. All artists were required to submit a maximum 100-word statement that “provides information on how you interpreted the theme through your artwork.”

The kid’s division was divided into sections by age: kindergarten through second grade, grades 3-5, grades 6-8 and grades 9-12.

Artwork in the kindergarten through second grade division was full of imagination from the young artists, featuring crayon drawings of mermaids, hot-glued seashells, people on boats in the water and colorful fish and octopi.

The artwork in the third to fifth grade division was just as colorful as those in the K-2 division and contained drawings of underwater coral, red crabs and sea turtles. One drawing was of the sunset over the Newport Bridge, which was a unique take on the prompt compared to others.

In the sixth through eighth grade division, the artwork was naturally more advanced than those of the younger children. Detailed drawings of surfers on the beach, sunsets over the ocean with real sand and photographs of rocks and shells were all adorable to look at.

“We were just stunned by the number of works that the youth in Rhode Island submitted for this first competition,” Pennell said. “They really are representative of the entire state.”

One of the most interesting parts of the children’s drawings was seeing how differently and uniquely each child took the prompt. For younger children, it was more imaginative, and as the children matured, their artwork matured as well.

Two beautiful oil paintings were on display, painted by local professional artist Andrea Sawyer. The paintings featured detailed images of a seashell on the sand and sea foam waves crashing onto the shore.

One painting that caught the eye featured a lobster on a plate at a restaurant. This was an interesting take on the prompt, bringing awareness to fishing, the killing of our ocean animals and our consumption of them.

Another painting that I particularly liked is one by Libby Manchester, another local Rhode Island artist. She drew the waves forming in the ocean, and it reminded me of a mountain range, with the waves forming peaks and valleys and the foam acting as snowcaps.

Overall, I really enjoyed watching the virtual art exhibition. It was inspiring to see the different interpretations from the different artists and see how they matured with age.