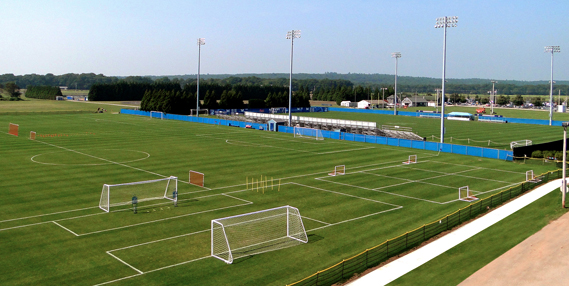 In celebration of Earth Day, the Cigar is taking a closer look at what goes into the maintenance of URI’s various turf and grass fields. Photo from gorhody.com.

*This article has been recycled for the Good Five Cent Cigar’s Earth Day issue. It was originally published Oct. 29, 2020.*

Even without games happening, the University of Rhode Island needs its outdoor facilities in tip-top shape before the action resumes.

The person in charge of that is Brian Boesch, the manager of turf and grass athletic grounds at the University, who runs the day-to-day operations of the athletic grounds division. He and his team of five manage the area from the Keaney parking lot and the tennis courts all the way to the intramural fields near the Flagg Road parking lot. In total, Boesch approximates that’s about 50 acres of recreational fields and 15 acres of varsity fields.

The University has multiple surfaces for its various outdoor athletic facilities. The URI Soccer Complex is home to a large, natural grass practice field that can be configured into multiple different sizes of fields, and it also contains an all-grass match field that is used by both men’s and women’s programs. Men’s Soccer Head Coach Gareth Elliott frequently cites the facilities as a reason student-athletes choose to come to URI. The URI Softball Complex is also a grass surface.

The University has synthetic turf fields at its disposal as well. Meade Stadium converted from a natural grass field to an artificial turf surface in time for the fall of 2019. Boesch said the synthetic turf was installed by FieldTurf, a world-renowned field installation company that also has worked with Gillette Stadium and the Mercedes-Benz Stadium in Atlanta. Bill Beck Field, where the Rams baseball team plays, is also a synthetic surface.

Even though one may think that taking care of a synthetic turf field is easier than a grass field, Boesch said that is a common misconception.

Extended time off due to the COVID-19 pandemic hasn’t necessarily held true for Boesch. He said they have used athletes’ time away from the field to fine-tune maintenance on the field since it is less busy. Once the action starts to pick up again, he said things like painting and working around the field become harder to do simply because it is in use.

“It hasn’t been a complete holiday,” he said as sports remain on hold. “Obviously, it has been a lighter load on the athletic side without the sports and such, but at the same time it has given us an opportunity to do some work on the fields, put a little time more in on the turf.”

Boesch, who completed his master’s degree at URI in the mid-2000s, said a big aspect of taking care of synthetic fields is regularly cleaning it. Germs can decay into the soil on natural grass fields, but that isn’t the case on turf. Trash and debris constantly need to be picked up, while hosing down the field also eliminates potential bacteria concerns. Still, Boesch said that research has shown that concerns such as MRSA, COVID-19 and other diseases are very low-risk.

In order to prevent injuries on synthetic fields, Boesch said that he and his team put a heavy emphasis on grooming. Without even distribution, Boesch said that certain areas can become thicker and thinner than others. When a spot is thinner, there is less absorbance the field can take, which he said then leads to the athlete taking more of the force of impact. Grooming also helps the surface’s longevity.

“The purpose of that (grooming) is for, there is a safety aspect to it but also a protection aspect of the field,” said Boesch. “If you don’t redistribute the rubber where it needs to be, it will wear out quicker on the field.”

The concern for the health and safety of student-athletes has never been greater in the world of college athletics, and URI continues to work on their facilities to ensure a safe environment for return to play.