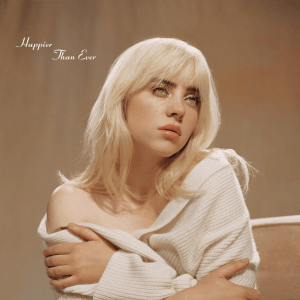 Billie Eilish’s “Happier than Ever” highlights a coming-of-age period for the popstar and closes out the summer of 2021. Photo from Wikipedia.

The music industry kept it hot this summer with standout releases across the board. Here are some of my favorites from the season.

It would be criminal to overlook Doja Cat’s third album “Planet Her,” which reached the top of Billboard’s all-genre charts in a matter of days this June. With features including SZA, Ariana Grande and The Weeknd, this drop had fans holding high expectations that, of course, Doja exceeded.

One of the most popular songs, “Ain’t Sh*t,” is my personal favorite, along with track four, “Get Into It (Yuh).” These songs showcase Doja’s confident, vivacious attitude while still offering complex layering and an undeniable flow.

All 14 tracks have addicting rhythm sequences, both vocally and instrumentally. The lyricism is carefree, and Doja’s rap game can be compared to the legendary Nicki Minaj. “Planet Her” is the no-skip album of the summer.

American singer-songwriter Clairo released her second studio album entitled “Sling,” taking the indie-folk genre to a whole new level. This collection flaunts Clairo’s thoughtful, emotive writing and appreciation for true 1970s folk. Her lyrics tackle topics such as mental health and misogyny while captivating fans with crunchy harmonies and synth keyboard riffs. Clairo sticks to the basics in terms of instrumentation, exhibiting her gifted vocals and the message behind each song more than anything.

“Just For Today” easily takes the number one spot on my ranking. Clairo opens up about her struggles with depression, adding personal notes to her most quaint musicality. She sings, “Two pats on the back ‘it just takes time’ / It’s getting late, since when did taking time take all my life?” This track is filled with emotion, much like the rest of the album.

Billie Eilish took over the internet this summer with the highly anticipated release of “Happier Than Ever.” This album turns to a softer side of Eilish’s style when compared to its 2019 predecessor “WHEN WE ALL FALL ASLEEP, WHERE DO WE GO?” I interpreted her new music as a coming-of-age period for the young pop star. Eilish gets candid with her experiences in the spotlight as a teenager, facing pressures to conform and impress. She still incorporates some trap into this album, while enthralling fans with piano ballads and bossa nova vibes.

The opening track, “Getting Older,” resonates the most with me. Eilish admits that regardless of how the media portrays her, she’s still just a kid figuring out her place in this world. She includes a pulsing beat behind her vulnerable story that adds depth to the tune. The closing lyrics strike me to the core: “I’ve had some trauma, did things I didn’t wanna / Was too afraid to tell ya, but now, I think it’s time.” Eilish is ready to open up and mature as an artist and an individual.

After years off the grid, rap trio Migos dropped “Culture III,” a 75-minute album featuring some of today’s hottest artists. Despite some censure from the critics, I found this album to be an infectious addition to my summer repertoire. They rhyme effortlessly over intricate trap beats. Each song is distinct from one another, which is a challenge in itself when curating a successful hip-hop album. The additions of Drake, Future, Justin Bieber and the late Pop Smoke attract an array of fans, making this album dynamic by keeping listeners on the edge of their seats.

“Having Our Way (feat. Drake)” is definitely my favorite track. The rhythmic pulse and swagger in Drake’s verse is some of his most impressive work which compliments the Migos triplet feel with ease.

Be sure to check out all of these releases, as well as The Good Five Cent Cigar’s podcast, “Our Five Cents,” which is set to resume on Spotify this semester.