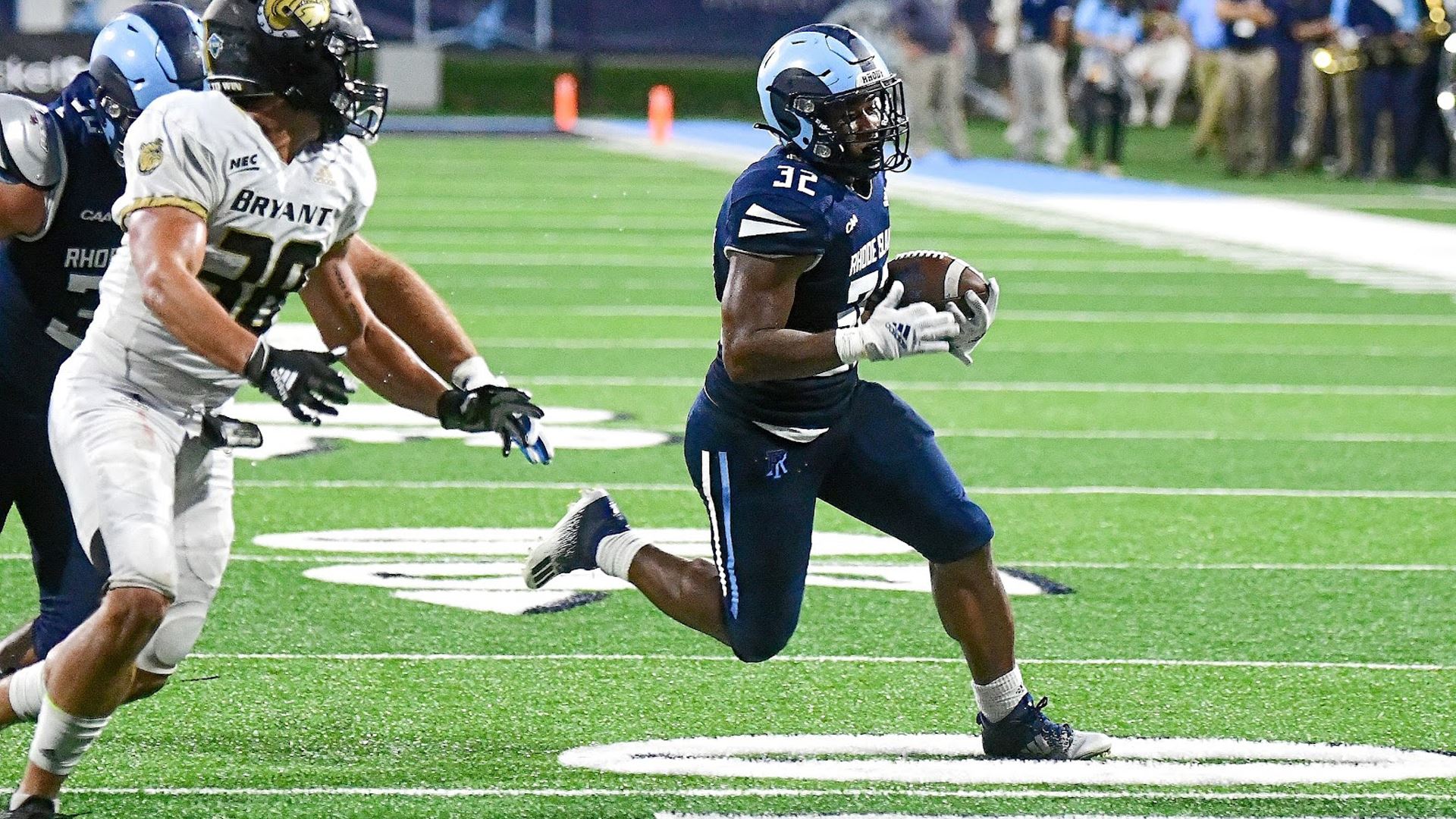 The University of Rhode Island Football team dominated the Bryant Bulldogs during their season opener at Meade Stadium after a second-quarter explosion that made way for a 45-21 victory.

The Rams’ offense excelled all night, putting up a total of 508 yards, led by quarterback Kasim Hill, who was also responsible for three touchdowns. Running back Justice Antrum rushed for two of his own as well.

The game opened with a strong eight-play, 76-yard drive down from the Rams that concluded with a one-yard rushing touchdown from Antrum. Bryant responded later in the quarter with a goal-eline push from running back Daniel Adeboboye on fourth down.

The Rams did their most damage in the second quarter beginning with a C.J. Carrick field goal to put the team up 10-7. They followed that with a 35-yard interception return from Jordan Jones that set up a 17-yard touchdown pass from Hill to receiver Ivory Frimpong. Bryant was able to get within three points after quarterback Gage Moloney found receiver Landon Ruggieri on a goal line fade with 5.04 left in the half. That was as close as the Bulldogs would get. Rhody got another touchdown pass from Hill and a rushing touchdown from Antrum before heading into the locker room with a 31-14 lead.

Like the start of the game, Rhody marched down and scored on a one-yard run from Hill to kick off the second half. Bryant followed it with a score of their own from running back Fabrice Mukendi, but it proved to be “too little, too late.” The Rams added an additional score midway through the fourth quarter with a 20-yard touchdown pass from Brandon “Pop” Robinson to Joey Kenny to make the score 45-21, where it would remain for the rest of the game.

“It was a very good feeling to be out there in front of my friends and family and teammates and to just be able to step up and make the most of my opportunity,” Antrum said.

Antrum, a senior from New Haven, Connecticut, started in place of reigning CAA Offensive Rookie of the Year Kevin Brown Jr., who is out for the season due to a right knee injury.

“In the past, I’ve been willing to help out in any role I can, and today, I was able to help out the offense,” Antrum said.

Saturday’s game was a reminder of what once was. Meade Stadium was buzzing with nearly 6,000 fans showing their support for the team’s season opener. After a year of COVD-19 restrictions and limited attendance, quarterback Hill was happy to see how many people showed up to support them.

“It [was] my first home game and night game,” Hill said. “It was fun to be out there in front of the community here. You can tell how much everybody supports the field and how much we want to give back to the community.”

Senior kicker C.J. Carrick became the all-time leading scorer among kickers in program history during this season opener, surpassing Matt Walker’s record of 208 points between 1995 and 1998. Carrick has now accumulated 212 points throughout his career.

Fleming said that it was a great opening night for URI football, and he made sure to thank the Rhody community for their support.

“Rhody fans came out big time and as I watched the other CAA teams play the other day, it’s not even close in terms of the environment,” Fleming said. “Great shoutout to our fans and our students and our faculty and everyone involved.”

The Rams are back in action next weekend where they will open up conference play against the University of Albany. Rhody knocked off the Great Danes in overtime, 17-10, when these two teams last met in March. Kick off is scheduled for 7 p.m.