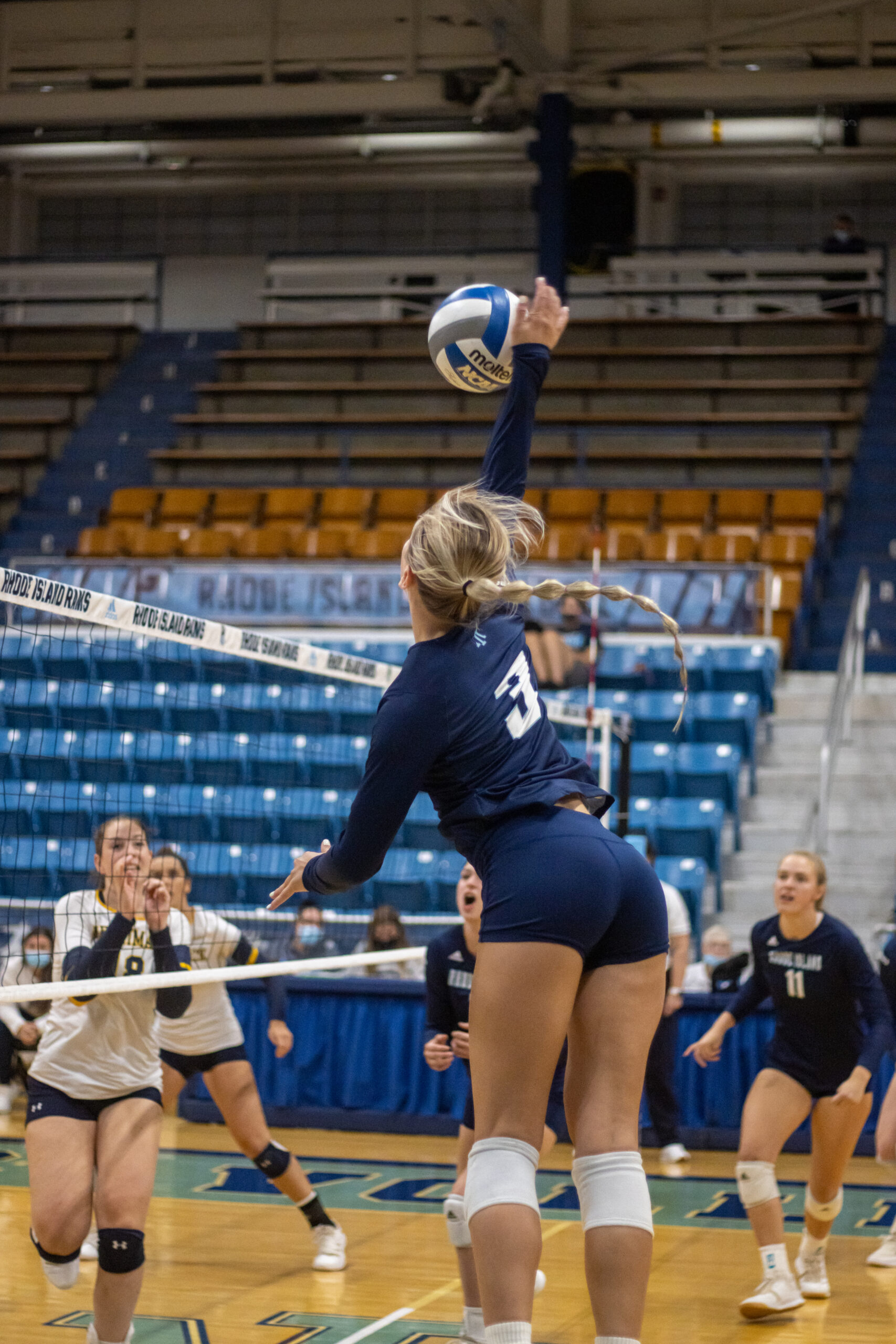 After six consecutive losses, the Rams got back on track with three wins in three days. Photo Credit Greg Clark

The University of Rhode Island volleyball team returned to Keaney Gym with strong performances this weekend, snapping a six-game losing streak and finishing the weekend 3-1.

The Rams brought their overall record to 5-7, scoring 3-1 victories against Rider and Hartford and winning in straight sets against Merrimack in the URI Alumni Weekend Invitational before dropping Sunday’s non-conference match to Boston College 3-0.

Facing Rider University on Friday night, Rhody took the first set 25-15, snapping a 13-set losing streak that dated back to their fourth set against Providence College on Aug. 31.

First-year Head Coach Angel Agu knew it was up to the play of her team to turn their fortunes around after a tough stretch to start the season.

“Positive play creates momentum,” Agu said of her team’s focus going into the tournament. “It’s not about errors on other teams or what the other team is doing, it’s about what we do.”

The third set brought a strong back-and-forth effort between both sides. Down 26-25, the Rams came out of a timeout and took the lead for good with a 3-0 scoring run to take the set 28-26. Rhody kept the momentum going in the fourth set, eventually taking the set and the game.

“I feel like it really set the tone,” sophomore outside hitter Brynne Wright said. “I think that energy really carries through in volleyball; it’s such a momentum sport.”

Senior Gabrielle Shilling led the team with 12 kills on the night. The outside hitter played just her second match since returning from an injury that kept her out of the team’s first four matches.

The Rams were able to carry their success over to Saturday against the Hartford Hawks. After taking the first two sets, the Hawks took a close one in the third, winning it 25-21 on the heels of a 3-0 run.

URI dominated the fourth set and won their second match of the tournament. An 8-0 run to start, and another 5-0 run shortly after, made it 16-3 Rams. Rhody eventually took the match and won the set 25-11.

Shilling and Wright both finished the match with 12 kills, a career-high for Wright.

The Rams saved their best play for last, as it was all Rhode Island in the final match of the tournament Saturday night against Merrimack. The team won their first two sets, with a 25-12 effort in the first set and 25-16 victory in the second.

Rhody closed out the match with a 25-7 win in the third and final set. This match was by far their most dominant performance of the season;  they did not trail at any point during the match.

“We have a phrase called ‘attack the wave,’” Agu said. “That means under any pressure, or under any impact zone, we’re courageous. We’re attacking the wave and playing our way. I thought they did a really good job of showing that this weekend, and we ended up 3-0.”

A number of Rams were recognized for their efforts over the weekend. Shilling was named tournament MVP, totaling 29 kills and 12 total blocks in three games. Wright and freshman setter Grace Hammond earned appearances on the all-tournament team, with Hammond also earning Atlantic 10 Rookie of the Week honors.

Rhody wrapped up the weekend on Sunday afternoon with a straight sets loss to a tough Boston College team. The Rams came close to taking the third set against the Eagles, but their efforts ultimately fell short as BC won the set 25-21.

The Rams look to get back in the win column this weekend with matches against Merrimack, Morgan State and New Hampshire at the UNH/Merrimack Tournament beginning Friday at 7 p.m.