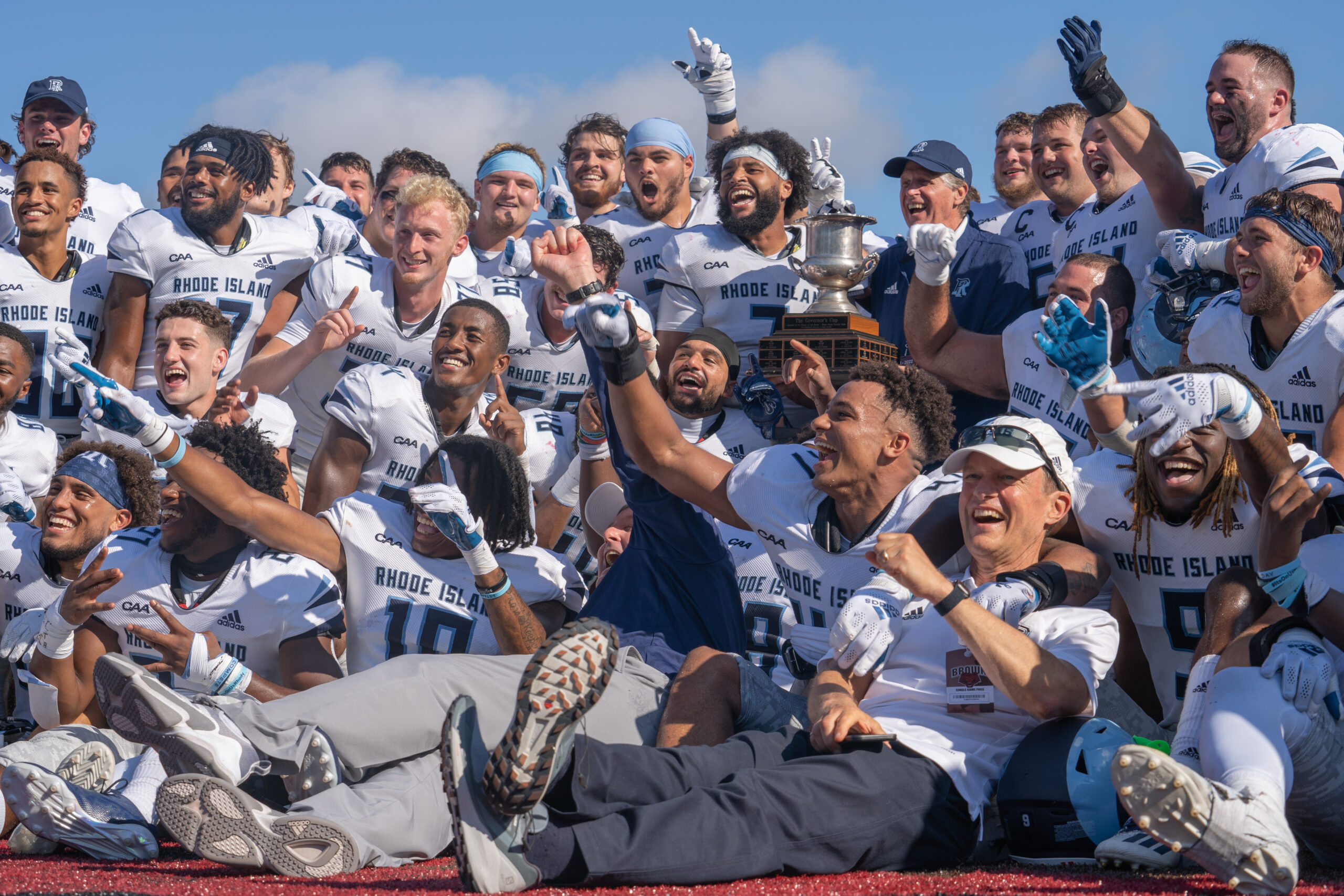 The University of Rhode Island Football team is off to its best start in 16 years after defeating in-state rival Brown University 45-24, capturing their third straight Governor’s Cup trophy.

“It was a huge Governor’s Cup win,” Rhode Island Football Head Coach Jim Fleming said after the win Saturday. “It can’t go unrecognized. That was a tough football game, and then we were able to get some things going our way in the second half.”

Brown, playing its first game in 665 days on a newly-installed turf field, had extra motivation to retake a trophy that hadn’t been theirs since 2017.

On their opening possession, the Bears moved down the field and scored on a touchdown pass from quarterback E.J. Perry to receiver Hayes Sutton to take their only lead of the afternoon.

Rhody responded immediately with a quick drive that was sparked by a 41-yard reception to receiver Ivory Frimpong from quarterback Kasim Hill. Two plays later, Hill found running back Justice Antrum on a wheel route, and he would do the rest, taking the 35-yard catch and run to the house to tie the ball game. That score was the first of 17-unanswered points that the Rams put on the board before the first quarter ended.

Brown managed to get within a field goal before halftime after running back Allen Smith rushed for a three-yard score, capping an impressive 15-play, 83-yard drive that took just under six minutes.

All hope of a Brown comeback left the stadium after the Rams came out of the locker room and outscored the Bears 21-0 in the third quarter and forced two takeaways––the first occurring on the very first play of the quarter when defensive back Antonio Carter II recovered a fumble forced by safety Henry Yianakopolos. At Brown’s 34-yard line, Hill took the offense down the field in six plays and tossed his second touchdown pass of the afternoon to tight end Caleb Warren.

Later in the quarter, Hill called his own number and scored at the goal line and receiver Matt Pires scored on a 80-yard dash down the right sideline to give the Rams a 38-14 lead heading into the fourth quarter.

Brown found some sort of offensive rhythm in the fourth, converting a field goal early and driving down to the URI six-yard line on their next possession, but Rhody added insult to injury with an 100-yard interception return from Jordan Jones––leaving no doubt that the Rams were deserving of the day’s ultimate prize.

After the game, Rhode Island Gov. Dan McKee joined Coach Fleming and the team on the field to present them the Governor’s Cup trophy.

“It’s my first game in the rivalry, ” Hill said after putting up a career-high 351 yards and four total touchdowns. “For a lot of people in the state, it means a lot, so I just wanted to come out here and experience it with the team. And for the people that this was their last game, I definitely wanted to send them off the right way.”

The victory also gives the Rams the unofficial state title as they defeated Bryant earlier this month.

“We’re state champs,” Caleb Warren said. “We have the Governor’s Cup, and we’re going to go back and celebrate. It’s unbelievable.”

Despite the loss, Brown dominated every major statistical category, putting up more plays, yards, first downs and possessing the ball longer than the Rams.

“I can’t go out without saying, I thought that was a really well managed game by [Brown coach James Perry],” Fleming said. “[They] had the ball for 36 minutes and really ground it out on our defense.”

After the game, Hill was named this week’s CAA Co-Offensive Player of the Week and given the New England Football Writer’s Association Gold Helmet Award.

The Rams will enjoy the week off before returning to action on Oct. 2 for an already-sold-out Homecoming Game against Stony Brook. Kick off is scheduled for noon.