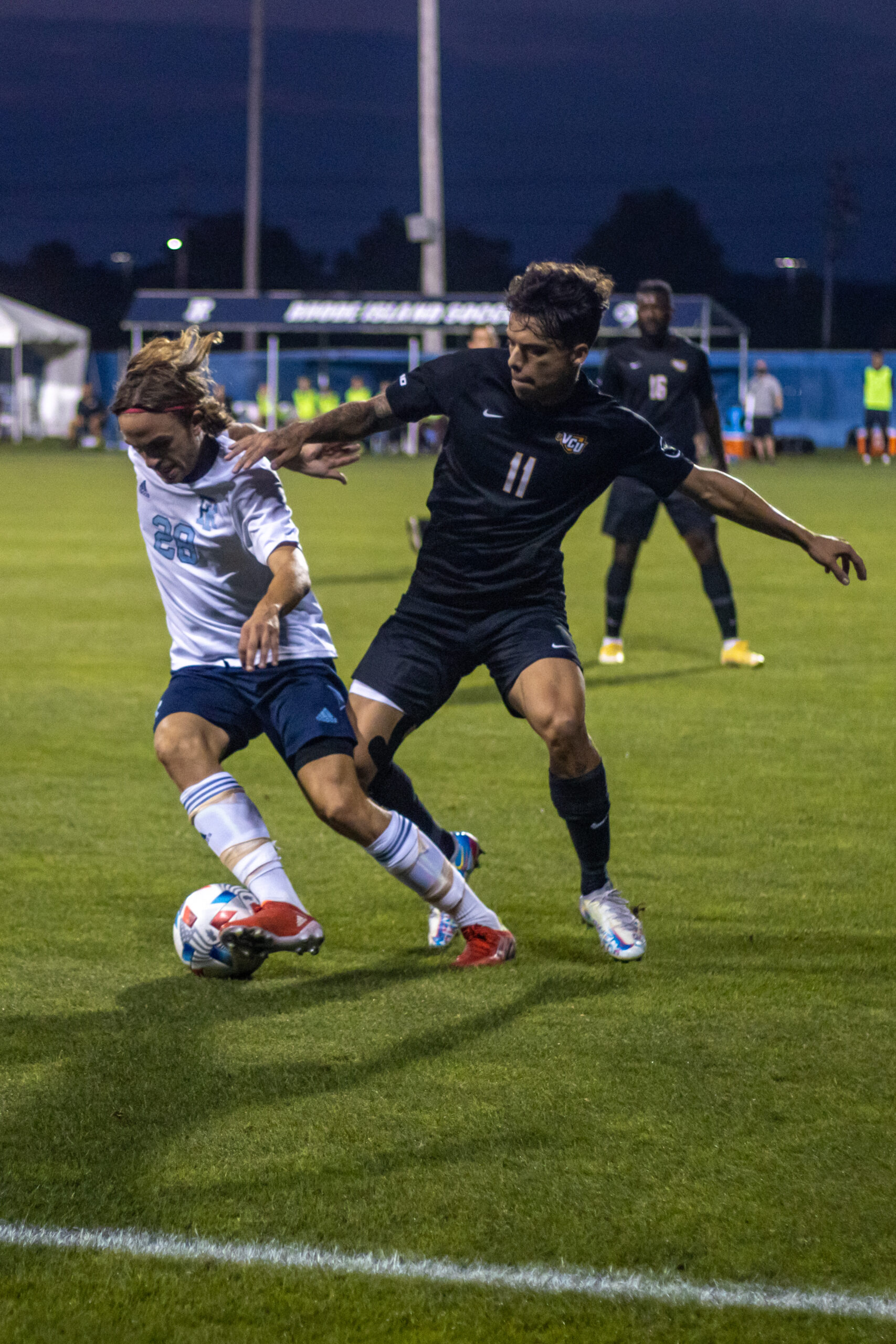 The University of Rhode Island brought each of their last two games to double overtime, coming out on top 2-1 against Virginia Commonwealth University on Saturday before suffering a 3-2 loss in Tuesday’s matchup at Albany.

The Rams now own a 5-2-1 record through eight games, as their streak of six straight unbeaten games comes to an end.

Freshman forward Isak Oystese had the finishing score for Rhody in the 100th minute of play against No. 22 VCU, giving them a win in their first Atlantic 10 contest of the season.

Both teams started out slow in the first half, with neither group able to get much of an offensive push. Slowing down VCU’s scoring attack was a big focus for Head Coach Gareth Elliott’s squad going into this game.

“Our plan was more of the start to set them off; they’re a quality team,” Elliott said. “We were just going to stay compact defensively, and I think we have enough offensive firepower on the team to always create some chances to possibly score.”

URI’s offense did just that to start off the second half, recording three more shots on goal in just the first five minutes of play.

Rhody struck first in the 63rd minute, when junior forward Rafa Villanueva found the net off the first corner kick opportunity of the game.

The Rams maintained the lead until the 77th minute, when VCU answered with a goal of their own. URI found themselves out of position and freshman midfielder Damien Gallagos took advantage of the miscue, scoring his second goal of the season.

Standout Celio Pompeo, who leads the team in scoring with three goals and eight points, was held in check by URI to this point. VCU soon had to adjust to playing without the star midfielder, as a red card in the very next minute brought his night to an end.

“He’s a fantastic player; one of the best players in the league this year,” Elliott said. “Anytime a player like that goes out of the game and gets a team down to 10 men, it’s going to be tough for them.”

Elliott referred back to a similar situation back in their 1-1 tie against Providence College on Sept. 6, when the Friars went down to 10 men late after a red card. He noted the experience from that matchup was valuable for his team in this situation.

The game went into overtime, with neither team able to score again in regulation. After 10 more minutes without a goal for either squad, the contest was finally decided after just over 100 minutes of play.

Oystese snuck the ball between two defenders and pushed towards the goal, sinking it into the net just out of the reach of VCU goalkeeper Mario Sequiera.

“I don’t remember [what happened],” Oystese said on the final sequence of the game. “It was a fantastic feeling.”

This week, the team appeared in the national rankings for the first time this season, checking in at No. 20 on TopDrawerSoccer’s latest poll. Agyemang was also recognized as this week’s A-10 Player of the Week and earned a spot on both TopDrawerSoccer and College Soccer News national teams of the week. Oystese also nabbed his third consecutive A-10 Rookie of the Week award.

Rhody’s matchup against Albany on Tuesday saw a hot start from both teams, as the Rams and Great Danes each found the back of the net within the first 8 minutes of the game.

Albany took a 2-1 lead before halftime when freshman Ricardo Rego took advantage of an Ram defense that was out of position. Hugo Guerra, playing his former team, tied the game again in the 73rd minute with his second goal of the night. The game eventually went into overtime.

The Great Danes got the winning score in the 105th minute when senior Austin DaSilva caught the Ram defense out of position. The loss marks the first time that the team has dropped a game since their season opener on Aug. 26 against Hofstra.

Rhody looks to make its way back in the win column on the road Saturday when they face off against fellow A-10 opponent Davidson at 7 p.m.