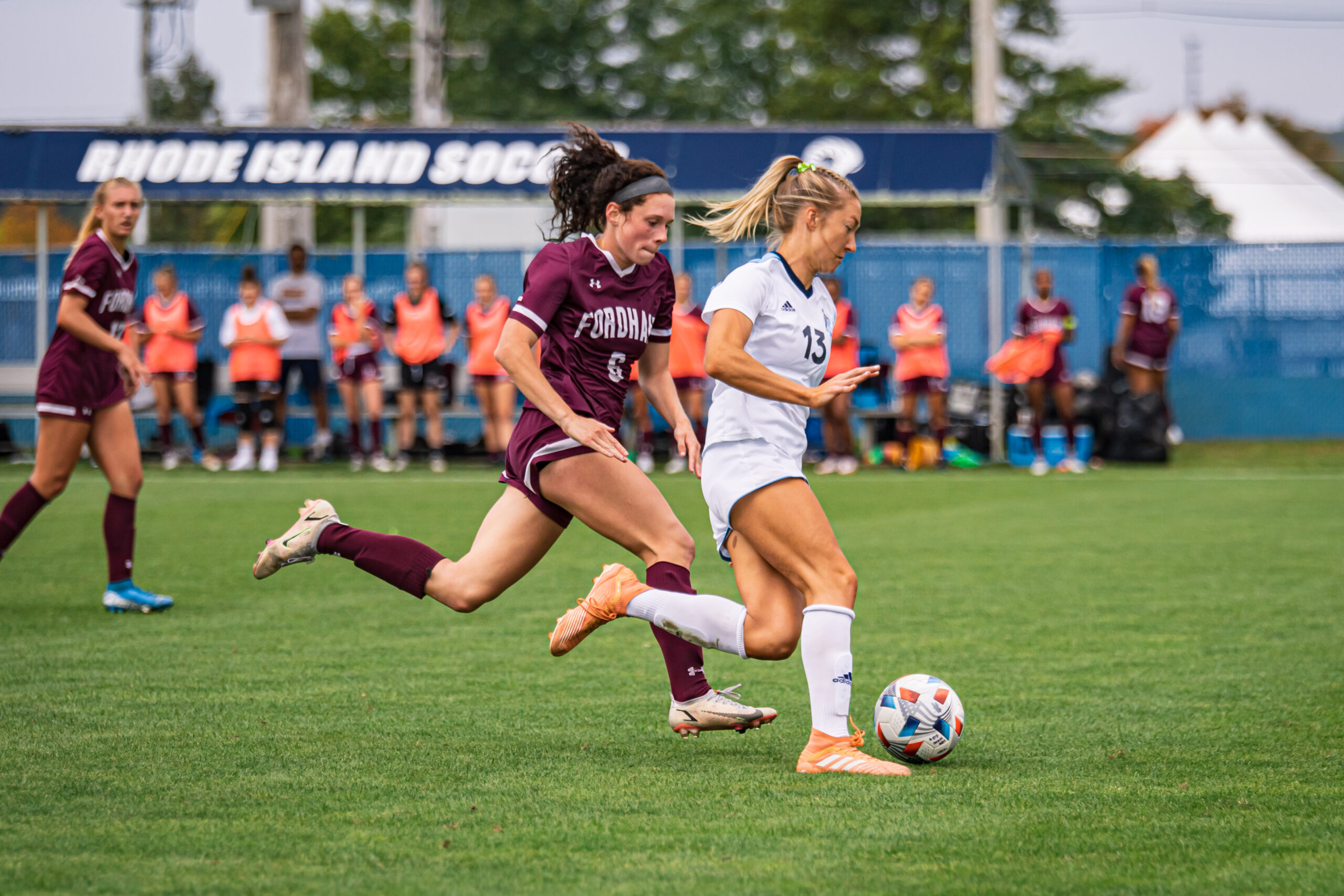 The University of Rhode Island Women’s Soccer team bounced back in dramatic fashion Sunday behind a goal from freshman Hope Santaniello in the 85th minute, helping them defeat Fordham 2-1.

The first half was all URI, with the Rams finding 11 of their 19 shots in the opening stanza. Shots by junior Brooke Cavino and sophomore Alyssa Fleming threatened the Fordham net, but to no avail. Meanwhile, the Rhody defense held strong, only allowing two shots and keeping the Rams of Fordham quiet. The two sides went into the break knotted up at 0-0.

The second half was more tightly contested as the two sides were even in shots at eight apiece. Several stellar saves were made by Rhody goalkeeper Faith Hutchins before Fordham broke the deadlock in the 70th minute with a free kick that caused a scrum in front of goal and led to an easy header for Fordham’s Schae Groton.

Rhody wasn’t ready to call it quits though, and it didn’t take long for the Rams to respond as Cavino scored just five minutes later off a header from an Alyssa Fleming corner kick that drifted into the top right corner.

From there, the momentum swung completely in favor of Rhode Island. The Rams continued to put pressure on Fordham until, finally, five minutes before the final whistle, freshman Santaniello received a pass from Cavino outside of the box and unleashed a right-footed shot into the top right corner of the net, giving Rhody the 2-1 advantage.

From there, the Rams were able to hold on and secure the victory, completing the comeback and improving their record to 4-5-2 on the season and 3-1-1 in Atlantic 10 play. This win kept the Rams in the top four of the conference, which would currently give them a home game in the opening round of the conference tournament.

Cavino added a goal and an assist to her season tally, making it two each on the year so far. Hutchins made six saves, including two crucial ones in the second half. As for Santaniello, it was her first goal in her first start as a Rhode Island Ram and one that meant a lot to her.

“I have been trying to transition into college soccer while also dealing with an MCL surgery,” Santaniello said. “So to be able to get that goal for my teammates and to win the game meant so much to me.”

As for Head Coach Megan Jessee, these kinds of moments from the freshman don’t come as a surprise.

“Hope [Santaniello] is definitely a freshman that we thought we would get a lot from this year,” Jessee said. “We knew she was capable of turning a game like that and it is a product of her just doing the work every day to get better.”

Santaniello was just the cherry on top in a brilliant display of resilience from the team though, something Jessee pointed out.

“For us, to score those last two goals in the last twenty minutes was huge,” Jessee said. “In past years, we may not have come back but we have some special players who stayed resilient and kept playing.”

The Rams will look to build on this crucial victory on Sunday when they hit the road to take on Atlantic-10 opponent Richmond for another crucial game. Currently, the Rams hold a half game lead over the Spiders for fourth place. Kick off is scheduled for 1 p.m.