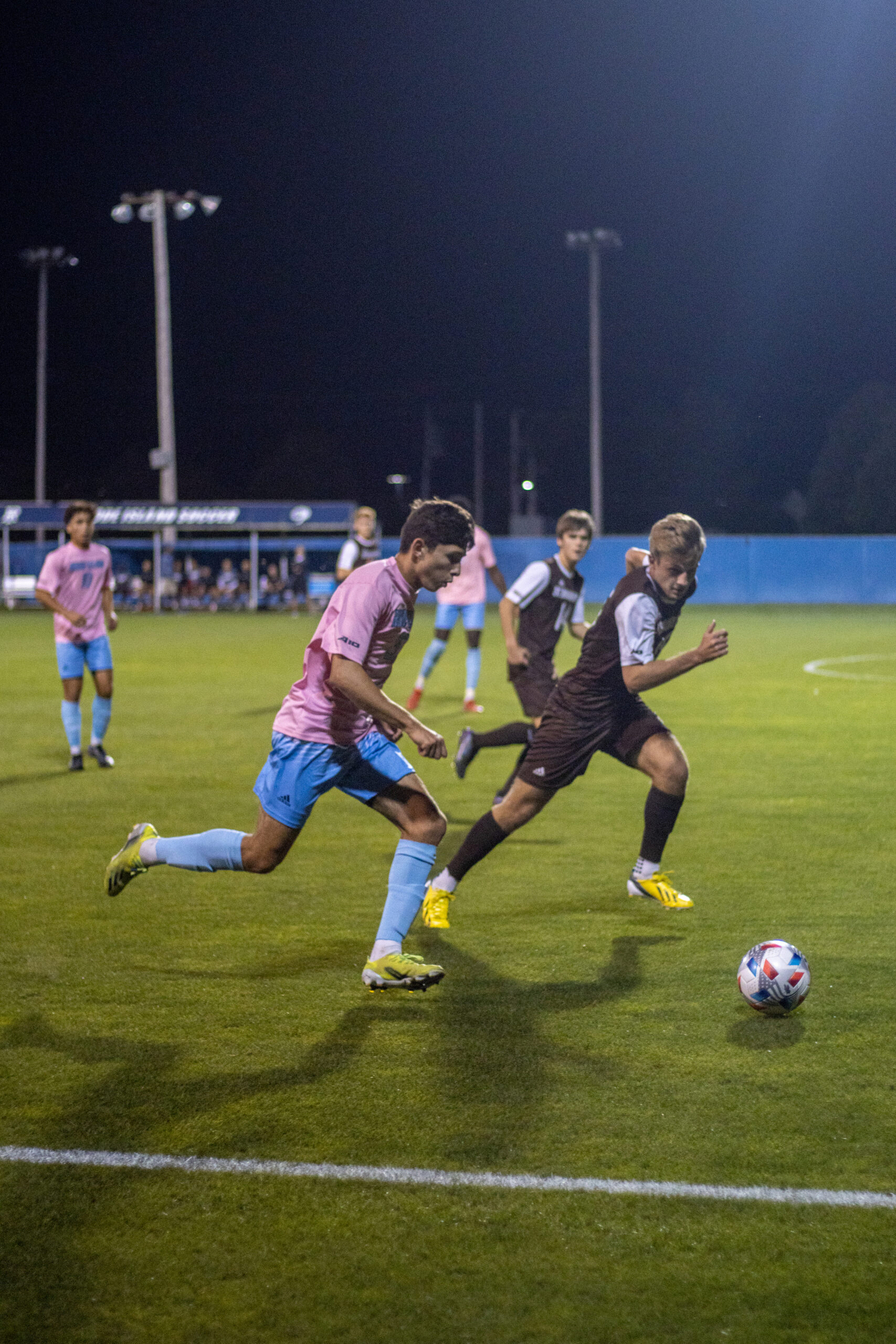 With a season-best four-goal performance, the University of Rhode Island Men’s Soccer team returned home Saturday and ended their two-game losing streak, winning 4-0 against Saint Bonaventure to earn their second Atlantic 10 victory of the season.

“Getting four goals at home and getting the shutout, after a couple of tough losses is good for the boys,” Rhode Island Men’s Soccer Coach Gareth Elliott said.

Midfielder Edvin Akselsen led the way for Rhody, scoring two of the team’s four goals and his first since the 2019 season. The Norwegian came off the bench in his first game action since Sept. 18 after missing time with an ankle injury, according to Elliott.

Following a slow start to the first half, Akselsen kicked off the scoring for URI. With the Bonnies looking to gain control in their own territory, he intercepted a pass and made a move to hit the back of the net at the end of the 38th minute.

“He’s a game-changer. I think on his day, he’s probably the best player in the league,” Elliott said. “When you have somebody like that out there, guys on the other team have to keep an extra eye, which leaves some more space for some other guys to operate.”

One of the “other guys” was Kevin Castaneda, who made the lead 2-0 Rhody in the 51st minute. The sophomore midfielder scored his first goal of the season and second of his career.

Castaneda is one member of a young-Rhody core that the team hopes to rely on over the next couple of years.

“We’re a younger team than years before,” Akselsen said. “But we have a lot of potential.”

Returning for his graduate season, Akselsen has quickly become one of the most experienced players on the team, taking on a larger leadership role among his teammates.

Akselsen got back in the action in the second half, earning his second goal in the 58th minute. Having not played all of last season due to the pandemic, the former A-10 champion is happy to be back in Kingston after a year away from the team in his home country of Norway.

“I missed playing with the guys,” he said. “This is what I love to do.”

Patrick Agyemang put the game out of reach for St. Bonaventure, making a move inside the Bonnies’ box to hit the back of the net with under 12 minutes left for his team-high sixth goal of the season.

The Rams also finished the night with four assists, with two going to junior forward Rafa Villanueva, his first two of the year. Freshman forward Isak Oystese and sophomore midfielder Ivan Montoro also finished with an assist each.

Rhody held the upper hand in every major category throughout the game, outshooting the Bonnies 16-6 while getting five more shots on goal. URI also had seven corner kicks to St. Bonaventure’s three, with the Bonnies’ first coming after 86:22 of play.

Rhode Island will continue their trek against conference foes this weekend when they go back on the road to face the Dayton Flyers. Keeping players healthy and scoring on the road will be the focus going into the next matchup, according to Elliott.

“It’s always a tough place to go,” he said. “If we defend well, I think we’ll be alright going forward.”

The Rams and the Flyers will kick off on Saturday at 7 p.m. at Baujan Field, and the game can be streamed live on ESPN+.