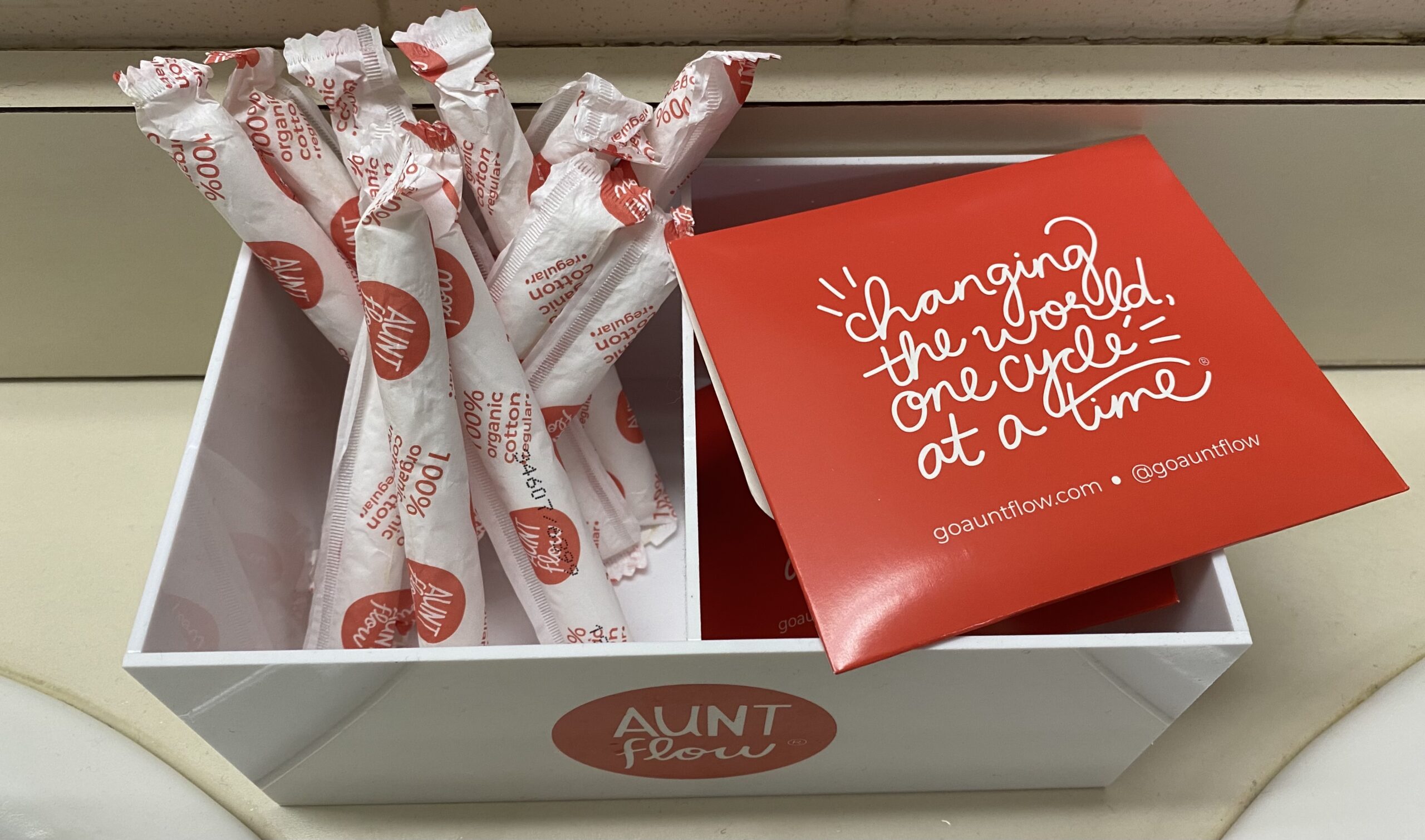 Aunt Flow is here to stay at the University of Rhode Island.

The URI Student Senate is funding and providing Aunt Flow menstrual products in the bathrooms of the Memorial Union and elsewhere for this semester.

In hopes to provide students with the opportunity to access quality menstrual products, Michael Bentley, the former Campus Affairs Chair of Student Senate, worked with fellow student Fiona Greenough to initiate a program to provide free menstrual products in the heart of campus, the Memorial Union.

This initial Senate-funded initiative was meant to act as a pilot program to allow the University to get a feel for how students would react to free menstrual products on the Kingston Campus. Bentley, Greenough and the Senate hope that the University will begin funding the program soon, as the pilot program has received positive feedback.

After the funding bill for this initiative was presented this past March, the current Campus Affairs Chair Emily Gamache said the inspiration for this project came from access concerns.

“We really just wanted to make students feel more comfortable in the bathroom, and if there were any problems, they would have access without any charge,” Gamache said. “We didn’t think it was fair for students to feel as though they have to pay that 25 cents when no one carries change on them anymore.”

The Senate partnered with Aunt Flow to bring this campaign to life on campus. Aunt Flow manufactures high-quality menstrual products and sells them at a reasonable price, allowing organizations to ensure everyone has access to free menstrual products. The company was chosen because the Senate wanted to both provide quality products and support Claire Coder’s self made business.

“This younger girl has this whole company that she started up for herself because she wanted schools to be able to supply this for students for free,” Gamache said. “It’s her own company, and we just reached out to her.”

In terms of quality, Gamache said that the product itself is made with 100 percent organic cotton, and the applicators are made out of plastic-coated cardboard — an environmentally friendly yet comfortable experience for the user.

As of right now, the Student Senate is fully funding this project and is putting nearly all of its budget into it, according to Gamache.

In order to receive funding from the Faculty Senate or the University, they have said they need to see that the products are being used and appreciated by students.

“We just need a certain amount of feedback from students using our products, and then we can show this to the faculty and hopefully have them fund it for us instead and say that URI should be able to provide this for the students,” Gamache said.

Students are able to scan a QR code when they use the products so they can provide feedback through a questionnaire.

According to Gamache, all of the feedback has been positive so far.

“So many people have said thank you so much for this project, like they’re very thankful for it,” she said. “They love the idea. Everything has been 100 percent positive feedback which has been so great to see.”

She also said that the products have not been mishandled or stolen from the bathrooms.

“I’ve seen a decent amount [of products] be gone throughout the week but it’s nothing like, ‘oh wow, why did we lose like 20 of the tampons I just put in yesterday,’” she said. “It’s very gradual, which has been so great and makes you feel like people are really respecting what we’re giving to them. So I find that very nice, and I’m really appreciative that students aren’t just like taking them and doing whatever with them.”

Greenough, who is now a senior gender and women’s studies major, was involved in beginning the initiative.

Greenough said that in high school she campaigned for free menstrual products and pitched the idea of bringing Aunt Flow products to the University at the end of her sophomore year.

She said that she had worked with different faculty to try and push this project, but it wasn’t until the Student Senate passed this bill almost a year later that things really took off.

“Someone connected me with the person who wrote the bill because they were like, ‘you two need to work together,’’’ Greenough said. “[The pitches] happened independently at first, but I’m super passionate about this so I really wanted to be involved.”

As of right now, Gamache is the only member of this project’s committee as the Senate awaits the elections of new members. However, Greenough got involved in the project even though she is not a part of the Senate.

“I’m doing what I can to help,” Greenough said. “I met up with Emily just last week to chat about what the plans are moving forward. We really want to make this a campus-wide thing.”

In the future, Gamache and Greenough both hope to put these products in all academic buildings on campus.

“Hopefully we can, little by little, add them to other academic buildings,” Greenough said. “That’s my main focus because I want this to be about access to education.”

Greenough said that faculty have pushed back against this initiative, stating things like “this is not our problem.” With financial support as their main problem right now, they are hoping students will continue to use and love the Aunt Flow products, so they can keep providing them through University funds.