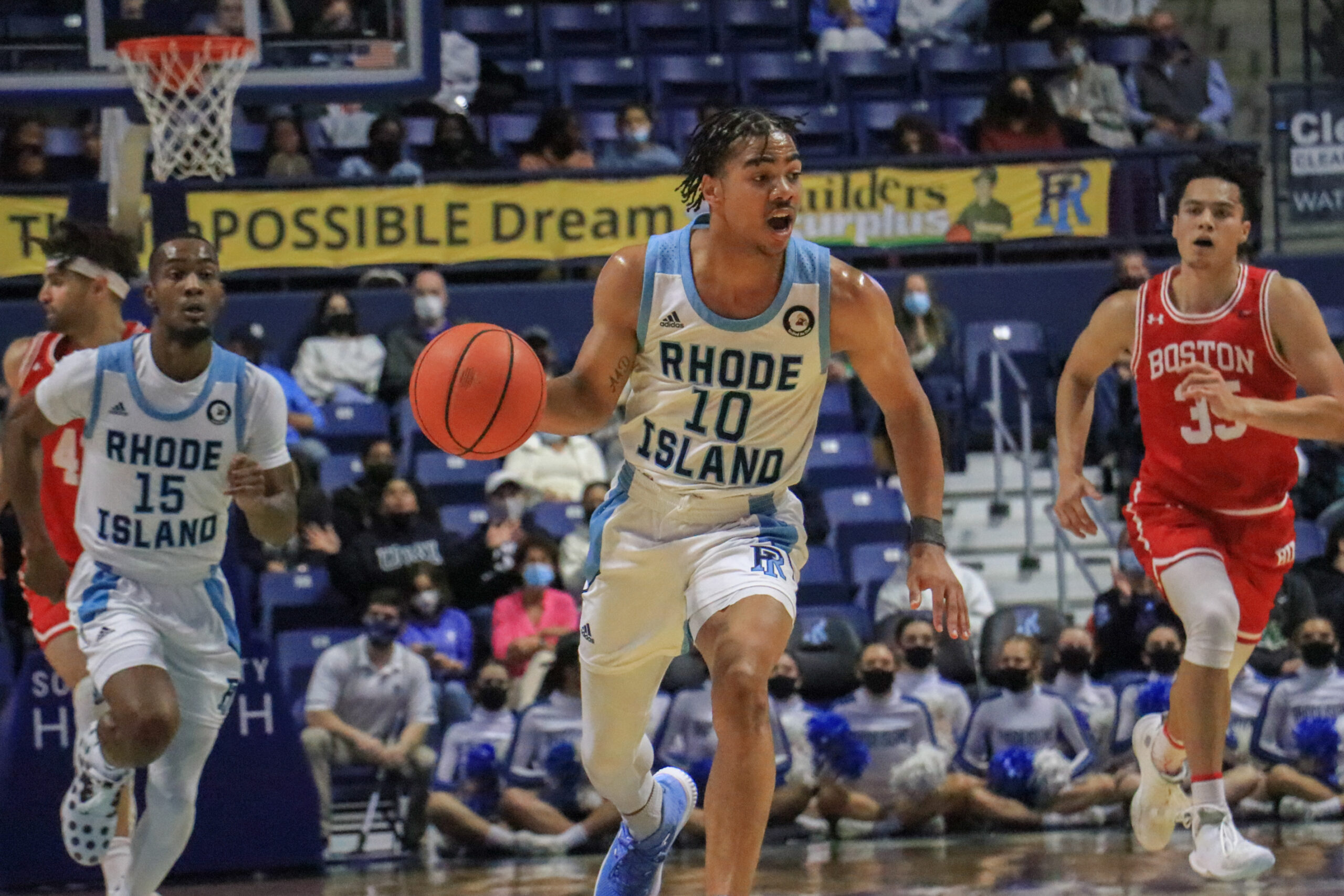 Ishmael Leggett picked up where he left off late last season with a team-high 18 points in Tuesday night’s win. PHOTO CREDIT: Matt Golarnick

For the first time in 615 days, fans were back inside of the Ryan Center for a meaningful men’s  basketball game, and they were rewarded with a 71-62 victory against the Boston University Terriers.

After opening the second half with a nine-point lead, the University of Rhode Island Rams saw the gap dwindle down to as little as four points with 2:15 left to play, but a stepback three-pointer from graduate student Ishmael El-Amin kept the Terriers at bay and secured the victory for the Rams.

“It felt good––just making a play for my team,” El-Amin said. “The score was dwindling down, they made some good baskets, we hadn’t scored in a while. Just excited. Making winning plays––that’s what winners do.”

Although it was an offensive play that clinched the victory, it was URI’s relentless effort on the defensive end that helped them maintain control of the game from start to finish. BU, who averaged 12.5 turnovers last season, gave the ball to Rhody 19 times Tuesday night. A chunk of those turnovers came within the first four minutes of the game, when they were held scoreless and turned the ball over five times. The Rams also had 10 blocks during the game.

“I was really impressed, particularly in the first half, with the defense,” Rhode Island Men’s Basketball Coach David Cox said. “It’s a veteran team, so we weren’t going to hold those guys to the same output in both halves, but I felt that our first half energy set the tone and we kind of held on and down the stretch, these guys showed up and helped us secure that victory.”

After the slow start, the visitors settled into the game and cut the deficit to 9-7 at the 12:10 mark, but Rhody used a 13-2 run during the middle portion of the first half to extend their lead to their largest of the night. BU managed to trim the gap back down to single digits to make it 36-27 at the half.

The Rams ran into a bit of trouble late in the second half after center Mahkel Mitchell and forward Antwan Walker fouled out and preseason Patriot League Player of the Year Javante McCoy scored 12 of his game-high 19 points for the Terriers in the period, but their early efforts and timely plays on both ends of the floor gave them the wire-to-wire victory.

Guard Ishmael Leggett finished the night with a team-high 18 points, shooting an efficient 6-for-10 from the field and 6-for-7 at the free throw line. Fellow backcourt mates Jeremy Sheppard and Ishmael El-Amin followed with 12 points each.

5,133 spectators, most of them students, witnessed the team’s first win of the year. After the game, Cox thanked them for the energy that they brought throughout.

Sheppard, who before tonight never played in front of fans inside of the Ryan Center, said he fed off of the atmosphere.

“I definitely enjoyed it,” he said. “My first year here, I didn’t play, but the crowd was amazing. I just wanted to be able to experience it.”

The Rams are back in action on Friday when they take on in-state rival Bryant at home in the first game of the Sunshine Slam. The game will also be the first of a doubleheader with the Rhody women’s team. Tip off is set for 6 p.m., and the game can be seen on Yurview Cox channel 4 and streamed on ESPN+.