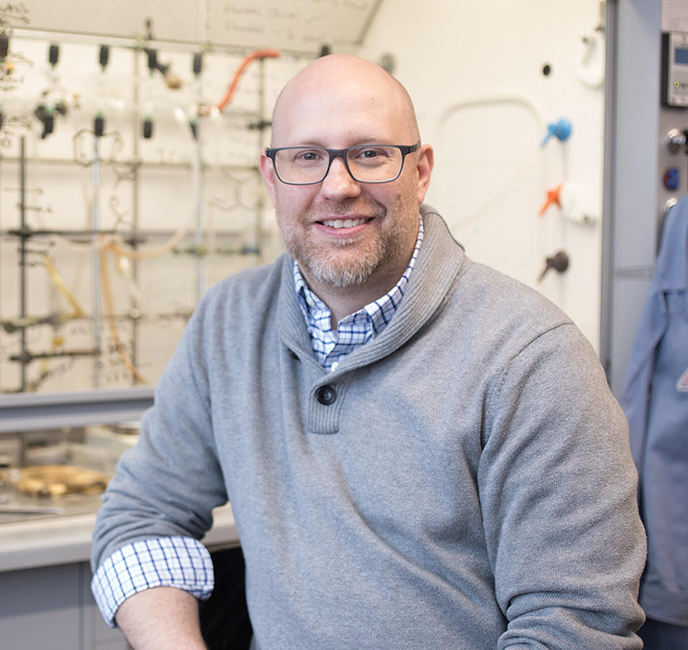 When Brenton DeBoef was living in New York and studying for his Ph.D. in chemistry at Columbia University, he decided to take a road trip to Newport, Rhode Island with his wife.

On their way, they decided to take a small detour to drive through the University of Rhode Island’s Kingston campus. He had never been to Rhode Island before, coming from a childhood defined by farm life in Iowa.

“That’s the kind of place that I could end up at,” DeBoef thought to himself at that moment, driving down Route 138 and seeing southern Rhode Island for the first time.

It is all too ironic that DeBoef would end up at URI just a few years later, taking on the role of associate professor.

“​​I canceled a bunch of other interviews that I had after I got the offer from URI because I was just really excited about coming here,” DeBoef said. “I thought I’d kind of be the right style of place.”

After working at the University as solely a professor for approximately 14 years, DeBoef became associate dean of the Graduate School, a position he held for a year, and ultimately took over as interim dean when former-Dean Nasser Zawia stepped down in 2020.

In June, the University informed the community of four finalists for the full-time graduate school dean position; DeBoef was among these names, after serving as interim for over a year from July 2020 through August 2021. The University announced this July that DeBoef had been chosen of the four candidates and would be serving as the University’s new Graduate School dean.

While this is only his first semester in the full-time role, DeBoef hopes to grow the prominence of the Graduate School at URI throughout the course of his tenure.

“We’ve done a really good job over the past decade of building our undergrad programs, and the grad programs have been good, but haven’t grown much and, and I think now is the time to invest,” DeBoef said. “I think over the next few years we’re gonna see growth in the graduate programs, but we’re just gonna make a lot of improvements, just for how it works.”

DeBoef cited the help and support of new University President Marc Parlange and interim Provost Laura Beauvais as leaders in growing the URI Graduate School throughout his past experience and in the future.

In his role, DeBoef works frequently with budgeting in order to support graduate students and promote the University’s offerings. This includes the ability to offer more scholarships and financial aid benefits to incoming URI graduate students, something DeBoef feels passionately about.

Alongside the development of more financial aid for his students, DeBoef is hoping to add another component to the Graduate School’s programming: student support.

According to DeBoef, the Graduate School is working to develop more personable aspects which have historically not been present. This will include creating professional development opportunities and a higher level of mental health support for enrolled master’s and doctorate candidates, akin to the offerings undergraduate students currently receive.

Corinne Kulesh, the Graduate School’s interim associate director of graduate enrollment management, meaning that part of her role is to oversee student success and support. She has been working alongside DeBoef for approximately a year now, working to develop these mechanisms.

“He’s very approachable; I appreciate that he loves the team aspect and respects our input and is very transparent about a lot of things,” Kulesh said. “Everything we do we think about, ‘What does that mean for the student?’ It’s hard work, and we work really hard, but it’s been really great to work with him.”

Most of DeBoef’s work in Graduate School leadership has been during the pandemic, but hosting the class of 2020’s delayed commencement ceremony in October was an important moment for him.

Although only 85 students of the estimated 400 graduates returned for the ceremony, DeBoef described it as rewarding nonetheless.

“It’s just a fraction of what would have normally been, but so many people were really grateful for that,” he said. “It’s kind of silly pomp and circumstance, or whatever, but it’s what we do, and it means a lot to students, and it means a lot to the families. I think it’s really important. I kind of underestimated it, actually.”

While he is quite busy in his role as dean, DeBoef still makes time each week to return to his roots in chemistry. Every Friday, DeBoef goes to his lab in Beaupre Center for Chemical and Forensic Sciences to work with students one-on-one and continue his research.

“On Fridays, I get to invest in grad students and undergrads on a real personal level, like, hands-on,”  he said. “The rest of the time I’m at a much less personal level but I’m still investing in grad students, trying to make systems and processes that can help them earn their degrees quicker and help make them better candidates for jobs they want after their degrees. It’s mentoring, but it’s kind of like on this macro level as opposed to mentoring on a micro level like I have done all along [as a professor].”