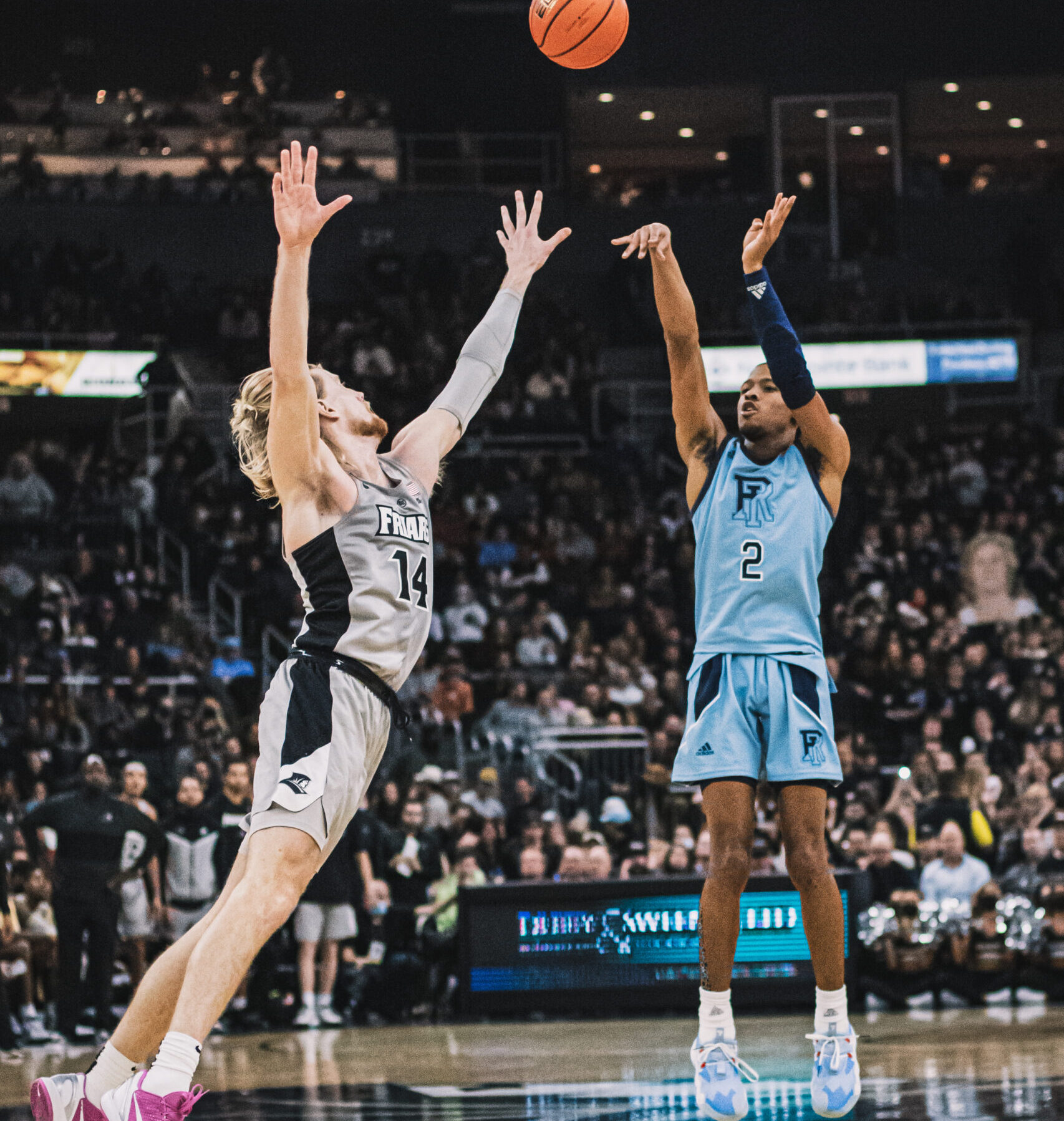 Jeremy Sheppard shoots a jumper over PC’s Noah Horchler in the second half on Saturday. PHOTO CREDIT: Siobhan Richards

After nearly two years, the rivalry between the University of Rhode Island and Providence College finally returned.

In the first matchup between the two teams since Dec. 2019, the Friars came out victorious 66-52 on Saturday after a late comeback effort by URI fell short. The Rams now drop to 6-3 on the season.

Despite the loss, Rhode Island Head Coach David Cox was appreciative of the effort his team displayed against a tough rival.

“I was certainly proud of the guys’ fight,” he said. “We showed a lot of character, a lot of fight tonight.”

PC took control right from the jump, scoring three straight 3-pointers to sprint out to a 9-0 lead. Providence made it 17-5 before the Rams put together one of their best stretches of the afternoon. Rhody held the Friars scoreless for over seven minutes, while adding 15 points of their own to take a 20-17 lead. Jeremy Sheppard recorded six points of his team-high 10 points over that span.

Unfortunately for URI, foul trouble hampered them throughout the game. Both of the Mitchell twins combined for five fouls just 15 minutes into the game. With both bigs out of the game, Providence was able to create momentum for themselves before halftime. The Friars extended their lead to 11, going into the locker room up 35-24.

Rhody finished the first half with 10 turnovers, while giving up 13 points off turnovers  and 15 second-chance points. An overall sloppy performance in the first half was “the difference” in what was otherwise a highly-competitive matchup, according to Cox.

“They punched us in the mouth,” he said. “We dug ourselves too deep of a hole playing against a quality team like that.”

One player the Rams had no answer for was Ed Croswell. The transfer from La Salle was a perfect 5-for-5 shooting off the bench through the first 20 minutes, eventually finishing the game with a double-double (13 points, 15 rebounds).

Having previously competed against the Rams in the Atlantic 10, Cox was impressed with the change in his play since joining Providence.

“He’s improved a lot,” Cox said. “He killed us on the offensive glass today.”

The second half brought out a much better performance in URI. Each squad traded baskets over the first several possessions, with PC maintaining a double-digit lead going into the first media timeout. The Rams then jumped out to another big run, going on an 8-0 stretch led by Antwan Walker and freshman Sebastian Thomas. The former scored a layup off of a Sheppard steal before picking up another score a minute-and-a-half later.

The latest burst of momentum put the Rams within six with 9:30 remaining in the game, with Providence holding onto a 50-44 lead. It was all Friars after that point, however. PC’s Noah Hurchler, who had been stellar from the 3-point line throughout, hit two crucial 3-pointers late to help push the Friars to the finish line, finishing with a game-high 16 points.

In the last 3:27 of the game, Rhody was only able to find the basket once while missing five straight shots on their way to an eventual third loss. Although the Rams improved overall in the second half, it was too little too late for Cox’s squad. The lack of physical presence throughout and an overall size disadvantage allowed PC to maintain control for most of the game.

“I thought we improved in the second half, but by then they had enough momentum,” Cox said. “I thought we played good enough defensively, just gave up too many offensive rebounds, too many second-chance points. [You] can’t do that against teams like this on the road.”

Rhody will have to wait until next year for a chance to regain bragging rights against their in-state rivals, with Providence set to visit the Ryan Center in the 2022-23 season. For now, they’ll look to get back into the win column when they take on Sacred Heart University at home on Tuesday.