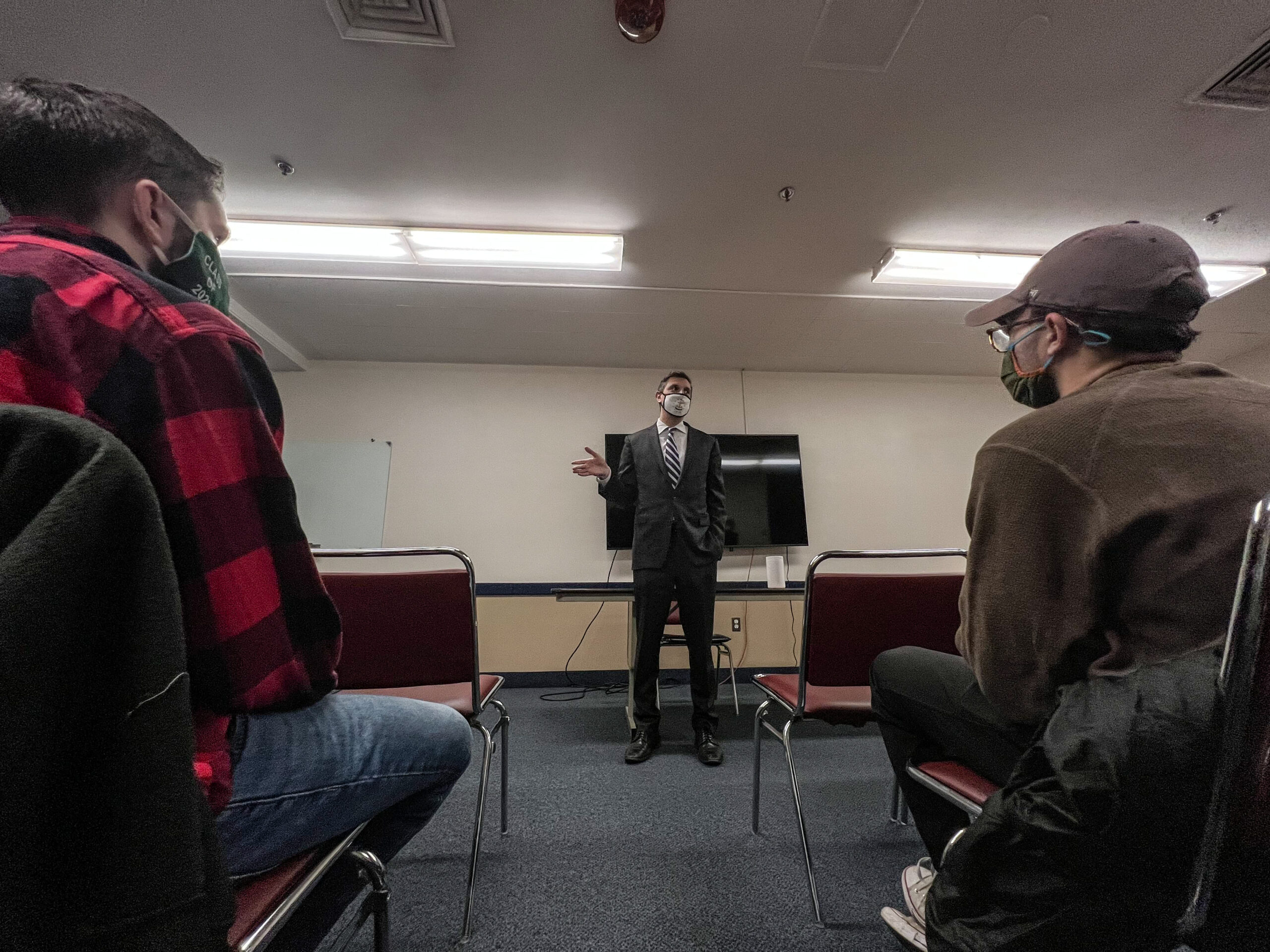 Seth Maganizer, the current General Treasurer of Rhode Island, talks to students about his plans to run for governor. PHOTO CREDIT: James Singer

The current General Treasurer of Rhode Island Seth Magaziner is running as the 2022 Governor of Rhode Island on the foundation of improving education, making the state reliant on fully renewable energy and fostering a state that provides the same opportunities for all.

The Rhode Island native has been the general treasurer of Rhode Island since 2015 and started his career by teaching at an elementary school in Louisiana.

Growing up locally in Bristol, Magaziner attended Brown University and Yale University, earning a degree in both history and business administration. During his time at Brown, he served as the president of College Democrats of Rhode Island and the Brown College Democrats, which is what he said ultimately inspired him to speak to the URI chapter of College Democrats at their “Democracy and Desserts” event on Monday.

After serving as treasurer for the past seven years, dipping his toes into politics, Magaziner said he is looking to become governor to provide Rhode Islanders with equal opportunity to “the American Dream.” He wants citizens to have access to economic mobility and the funds to create their own businesses.

He said that his grandparents were born into low-income immigrant families during the Great Depression. Despite hardships, they were able to get good jobs and provide for their families after the war.

Now, however, he believes that Americans don’t have the same type of economic mobility that allowed his family to thrive, leaving many working-class citizens today without hope.

“People are working harder and harder, working multiple jobs and having a hard time just keeping up with the cost of life,” he said. “We also have to call to the fact that for many Americans, particularly in communities of color, the American Dream never fully existed, to begin with. So to me, it is all about restoring it and making it accessible and universal to everyone.”

“​​To me, it starts with education, because I do believe that that is still the key to how we allow people to achieve their potential and follow their dreams,” he said.

As treasurer, he led a state-wide school construction program four years ago under then-Gov. Gina Raimondo. Magaziner said that Raimondo asked him to lead this campaign, saying that Rhode Island schools were not up to safety standards.

He said that he sees how students and faculty are impacted by the condition of school buildings and that “every child deserves to go to a school that’s safe, warm, dry and equipped for 21st-century learning.”

With this in mind, the plan was passed into law by voters in 2018 and has since allocated $1.4 billion to repair and replace 180 schools throughout the state.

Although some of these projects have already started taking place, he said that a majority of them are still in the design phase and will begin this summer.

In addition to this, he said they plan to build and repair over 40 schools in Providence. Magaziner said that this plan will put students on a path of success, create over 20,000 new jobs and school over 100,000 students.

He said he is also looking into universal preschool, developing more multilingual programs in school and expanding Rhode Island’s Promise Program, which would provide two free years of a college education at URI, Rhode Island College or the Community College of Rhode Island.

“My platform for education is based on the principle that every child deserves to get a great education, regardless of background,” Magaziner said.

Magaziner said that he has also been very active in creating an ambitious plan to transition Rhode Island to 100 percent renewable energy by the end of this decade.

He said that he sees renewable energy as an essential component of keeping the state in good hands and thinks that now is a better time than ever.

“If we let this opportunity go to waste, a generation from now people are going to look back at us and say, ‘what’s wrong with you people?’” he said. “I’m running because I want to make sure that we don’t let this moment go to waste.”

Cameron Chadronet, a freshman at URI, asked Magaziner at the event how he plans to continue to advocate for clean energy after the state is done transitioning to renewable energy.

Magaziner answered this by saying that although Rhode Island will switch to renewable energy, he can’t predict what the rest of the world is going to do. Because of this, he said that the state will have to prepare ways to protect itself from the consequences of climate change, such as building around rising sea levels.

He said that he is also campaigning for free public transportation, which will decrease the state’s carbon footprint and will increase accessibility.

The president of the URI College Democrats, Christopher Bove, expressed his concerns on the availability and comprehensiveness of the Rhode Island Public Transit Authority (RIPTA) to which he was able to promise change.

According to Magaziner, the state has a $13 billion budget and providing the entire state of Rhode Island with free public transportation would only cost them $12 million. He referred to this as a ‘fraction of a fraction of a percent,’ and said that this essential initiative is affordable.

“It’s something we can afford to do,” Magaziner said. “I think not only will that make it easier for people to keep up with the cost of living, particularly Rhode Islanders who are on fixed incomes, have lower-income, for those who are elderly, etc. But I also think that it will boost ridership and will be a novelty, you know, for Rhode Island to be the first state in the country with completely free public transportation.”

Magaziner ended the night by taking photos with the College Democrats, engaging in small talk and enjoying desserts with the students.