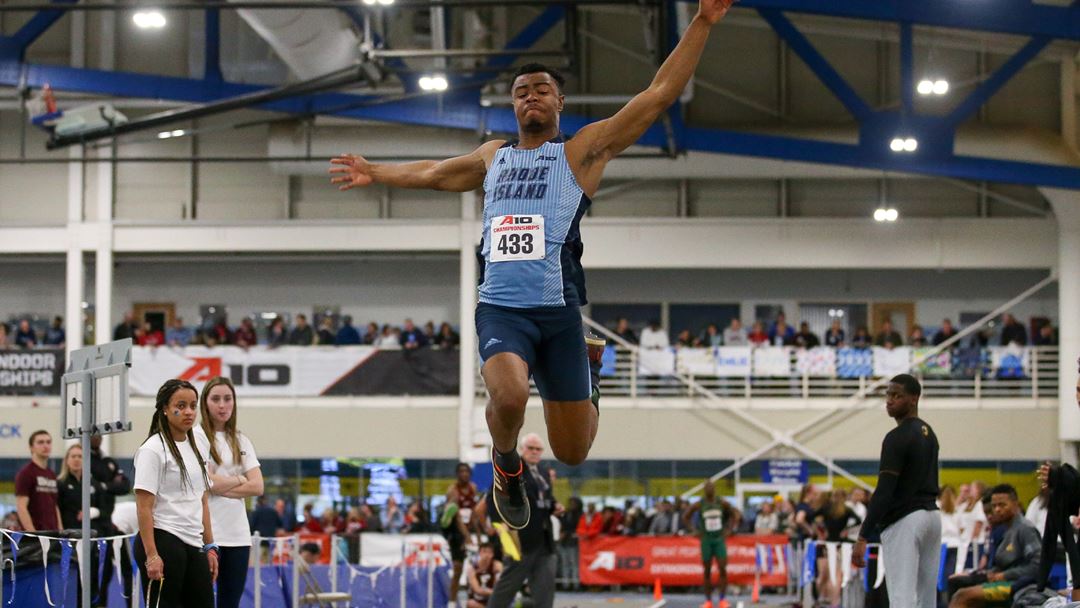 Senior Garrett Robinson achieved a personal best 14.65 meters in the triple jump to open the season this past weekend. PHOTO CREDIT: gorhody.com

The University of Rhode Island Men’s Track and Field team kicked off the indoor season last Saturday at the Boston University’s Sharon Colyear-Danville Season Opener against over 50 teams from across the country.

“This meet was a non-scoring meet, so we’re not super concerned about how we compare to our competitors,” Rhode Island Men’s Track and Field Coach Trent Baltzell said. “Most meets in the early season are preparation for the championship meets, [so] we’re just looking for quality individual performances from our own athletes.”

Beginning on the track, sophomore Jolon O’Connor got the team’s first victory of the day in the 200-meter run where he ran a time of 22.15. In the same event, sophomore Nathan Barjolo and freshman Julian Thomson also placed in the top five with times of 22.64 and 22.69 respectively.

Freshman Jarrett Young placed second in the 400-meter with a time of 49.19, and in the 1000 meters, junior Collin Ochs and graduate student Nathan Coogan each placed in the top five with times of 2:28 and 2:29 respectively.

There were also plenty of strong performances in the field events, too.

“[Garett’s] just the type of guy to put in the work day in and day out,” senior thrower Derek Jacobs said. “It’s just really admirable and we love to see guys like him doing so well.”

The Rams swept the top four positions in the weight with senior Johnathan Buchanan winning the event with a distance of 17.91 meters. He was followed by Jacobs, Jide Akinjisola and Sam Bond.

“I think the performances were pretty solid overall, especially for this early in the season,” Jacobs said. “This just means that we’re starting with really good structure to build off of and learn from. When we peak, we’re going to be that much better when it matters the most.”

Looking forward to the next competition, the team is hoping to keep advancing in their pursuit of another Atlantic 10 title. That work continues at the two-day URI Heptathlon being held at Mackal Field House. The first day of events begins today at 2 p.m. with the competition wrapping up on Friday at 11:30 a.m.