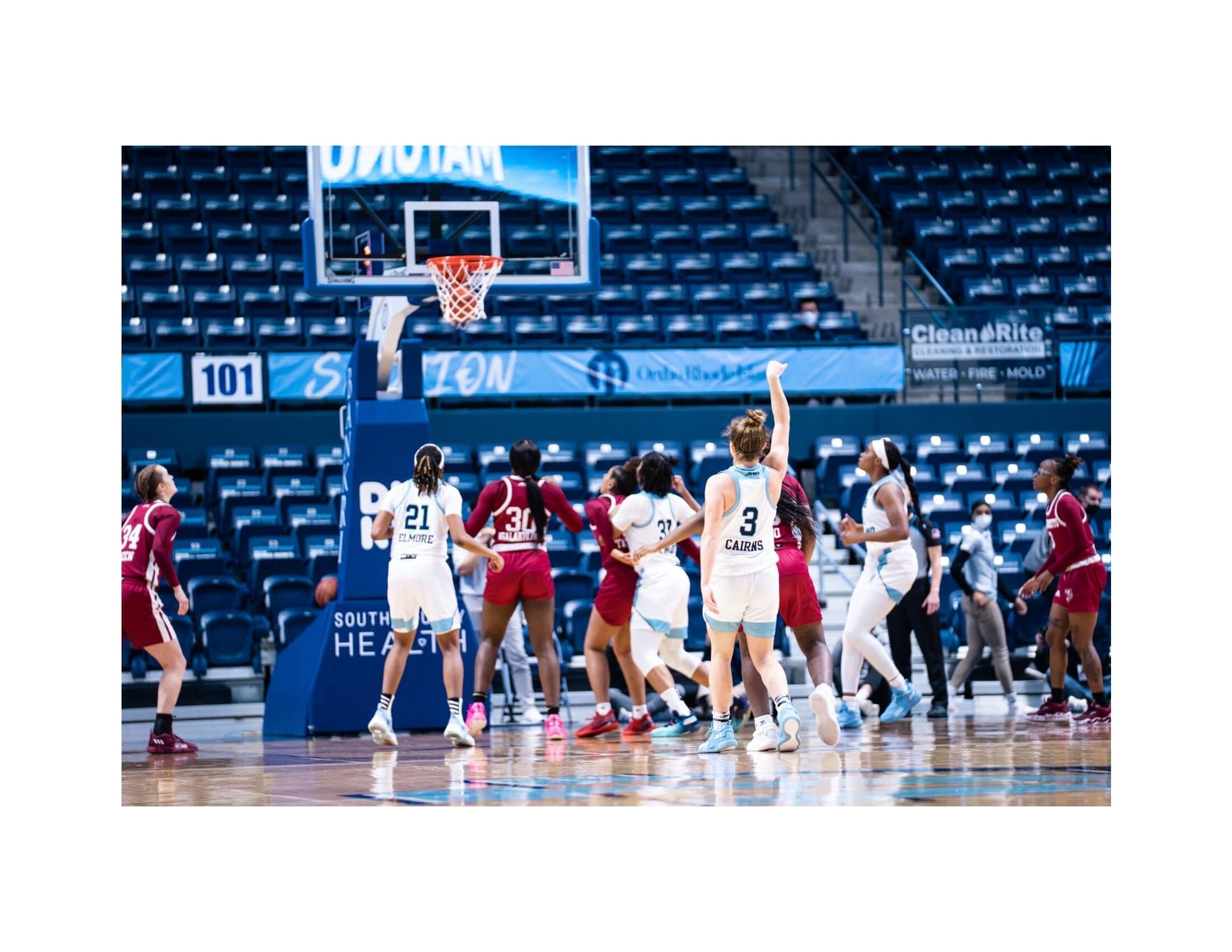 In a battle for first place in the Atlantic 10, a season-high 21 points from sophomore Dolly Cairns helped the University of Rhode Island women’s basketball team pull out a 66-58 victory over the University of Massachusetts Amherst to extend their winning streak to six games.

After going up by as much as 28-8 early in the second quarter, the Minutewomen rallied to cut the deficit to 58-56 with 2:36 remaining in the fourth quarter, but Cairns closed the door on the visitors with one of her five made three-pointers to come away with the win.

“I’m really pleased with the perseverance and the character that our team showed tonight, especially down the stretch,” University of Rhode Island Women’s Basketball coach Tammi Reiss said. “We started out like gangbusters. They executed when they needed to execute and they made free throws when they needed to make free throws. For us, this is a great win and it shows a little bit of growth that we are taking some steps here in closing games out.”

Since the team returned from its three-week-long COVID-19 pause last Wednesday, Cairns is averaging 18 points per game in the place of graduate guard Marta Vargas, who is still working her way back from a positive COVID-19 test.

“It’s really great,” Cairns said about her new role. “The biggest thing that I love about this team is that we stay together no matter who’s in the game and we try to get the job done every night.”

Reiss says her performance as of late is a testament to the kind of player and person Cairns is.

“When you talk about an unselfish kid, that’s her,” Reiss said. “Whatever the team needs, she does. She’s the most coachable kid, she’s waited her turn and she’s been very patient here. Her character is why I love her and why I had to have her [when I first got to Rhode Island]. She’s waited for this role and now it’s been handed to her because she earned it and I couldn’t be more proud.”

“I want her to be Steph Curry. That’s my vision for her. I told her that when we had our first phone call, but that’s the level she can attain and every year she’s getting better and better.”

URI was able to open up a lead in the first half thanks to strong defense and an 18-0 run that stretched eight minutes of game action between the first and second quarters. Sydney Taylor broke the scoring run with a three-pointer in the left corner and another triple two possessions later to cut the deficit to 30-16 at the second-quarter media timeout. The Rams refocused and finished the half with a 38-22 lead.

After the break, the Minutewomen slowly chipped at the deficit thanks to a strong third quarter that made it a two-possession game at the end of the period. This was in part due to their star leading scorer, Sam Breen, who exploded for 10 of her game-high 25 points during the third quarter.

“We had to collectively remind them that we got to go back to what was successful for us,”  Reiss said after UMass made their run.

In the final frame, the Minutewomen brought it to a one-score game after Breen knocked down a pair of free throws with 2:36 remaining, but the Rams would make four of their final five field goals to close out the game and maintain their perfect record at home this season.

Up next for Tammi Reiss’ squad is a Wednesday night trip to Pittsburgh to take on Duquesne University. The Rams were upset by the Dukes in their previous matchup last February and hope to right the ship this time around. Tip off is scheduled for 7 p.m. and the game can be streamed on ESPN+.