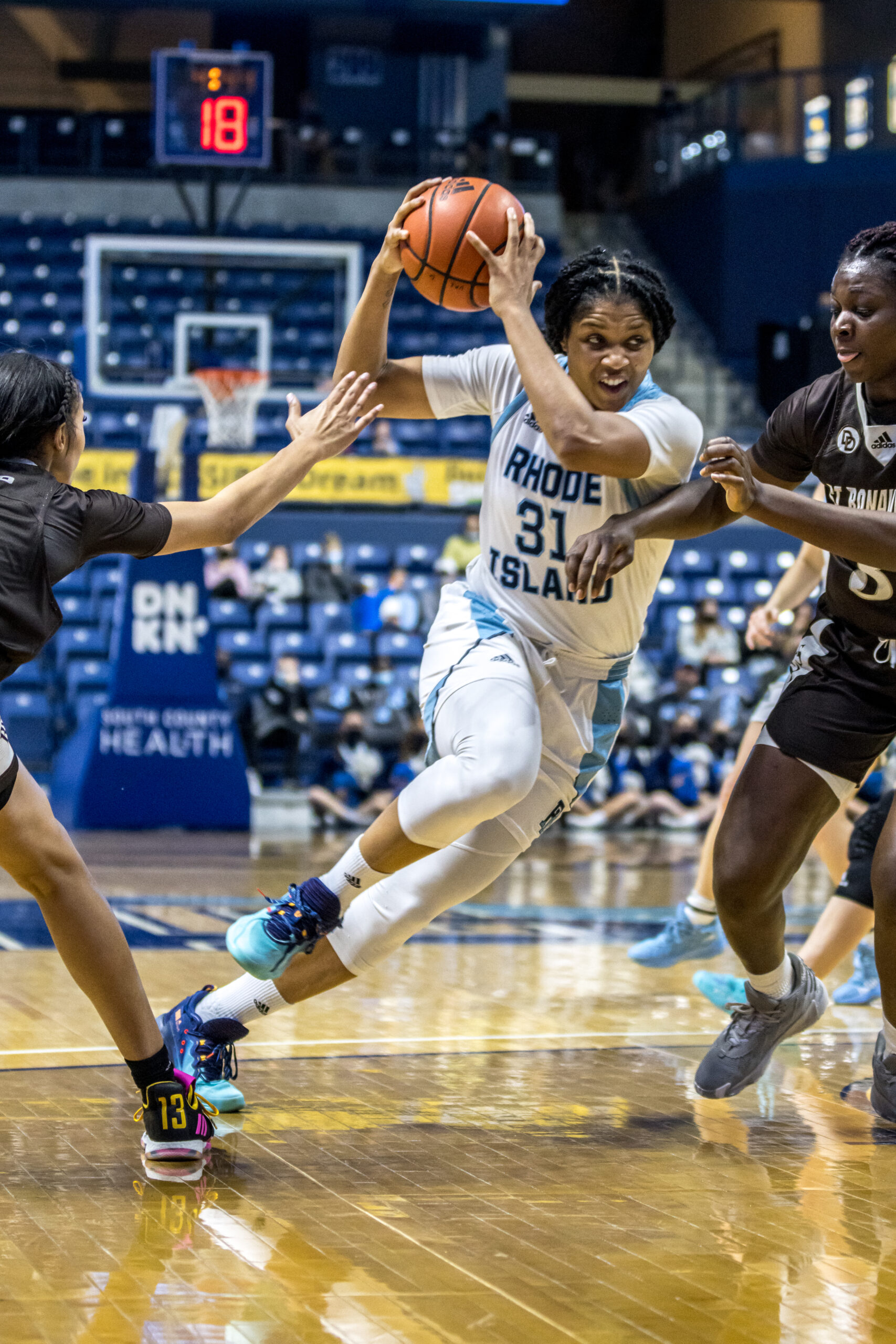 Though it was a balanced effort for the Rams this season and the award could have been given to a number of different contributors, it was sophomore Makhel Mitchell who stood tall for Rhody and anchored the defense. The 6-10 center from Washington, D.C. led the team in scoring with 10.7 per game and was second only to his brother Makhi in rebounding, grabbing 5.6 per contest. The most impressive number for Mitchell, though, were his 2.4 blocks per game, good enough for third in the Atlantic 10 and 26th nationally. The big man’s best performance came against UMass, when he put up 20 points on 10-of-15 shooting from the field while grabbing five rebounds and recording four blocks in a road win for the Rams.

Returning for her fifth season after capturing A-10 Co-Player of the Year honors a season ago, Emmanuelle Tahane once again proved to be a top talent in the conference as one of the leaders on a seasoned URI squad. Anchoring a group that put together a program-best 22 win campaign, Tahane led the team in points (13.9) and rebounds (8.8) per game. Her efforts were enough to earn A-10 First Team honors this past season, all while helping the Rams finish second in the conference and punch their ticket to the Women’s National Invitation Tournament (WNIT) — their second-ever postseason appearance in program history.

The URI Men’s Hockey team went into the season with a lack of experience at the net, having had their 2021 season canceled due to COVID-19. With the position wide open, Curtis Briggs answered the call and provided a consistent presence on the ice for the Rams. The Foster native was named the Eastern States Collegiate Hockey League (ESCHL) Rookie of the Year and was selected for both the All-Conference Team and All-Conference Rookie Team after guiding his team to the playoffs as the No. 3 seed. This past season, Briggs finished seventh in the nation in save percentage (0.920) and ninth in goals against average (2.68) along with three shutouts in 26 games.

The standout for the Rhody Women’s Hockey team this year was senior forward Carissa Rego. The Rams battled in the ACHA, finishing with an 8-12-1 record, the Rams were ranked 18th in the conference thanks to 20 points (9 goals, 11 assists) from Rego. Most notably, the forward scored an overtime game-winning goal and recorded three assists in two separate victories over UMass the last month of the season. Rego also had a four-point performance, notching three goals and an assist in a 7-2 win over Concordia Ann-Arbor last November.

In a historic season for the Men’s Track and Field team, it was senior distance runner Kellen Waters who headlined the Rams campaign. Waters achieved a number of historic marks this season, but the most notable was the school records that he and his relay teammates Collin Ochs, Tyler Rubush, Nathan Coogan and Liam Creeley set in the 4×800 and distance medley meter relay. The group shattered the distance medley record with a time of 9:43.17 at the BU Terrier Classic and Waters and his teammates followed that up with the 4×800 record of 7:24.31 at the IC4A Championships.

The Women’s Track and Field team had a lot of youth in its ranks this year, but one runner brought a lot of experience to the squad this year — Bethany DeLoof. DeLoof, in her graduate season with the Rams, made some noise in her final year in Kingston. The Strongsville, Ohio native achieved a career best in the 400 meters at the BU Valentine Invite with a time of 56.53 seconds. She continued to follow that up with spectacular performances, finishing third at the A-10 Championships in the 500 meters and fourth in the ECAC Championships. Another huge moment in DeLoof’s season was when she took home the 500-meter crown at the New England Championships with a time of 1:14.89.

While Marta Baumann put together her best season since joining the swimming and diving team in 2019 this past season, she also made a little history along the way. A native of San Carlos, California, Baumann found her way into the record books after posting a facility record mark in the 1-meter dive at the McCann Natatorium on Nov. 6 with a score of 188.85. Less than two weeks later, she broke another record with a score of 283.35 in the 1-meter dive, topping the previous school record of 282.075 set in 2017. Baumann’s efforts earned her a trip to the NCAA Zone A Championships in Annapolis, Md., where she scored 195.70 to finish 74th in the 1-meter dive.