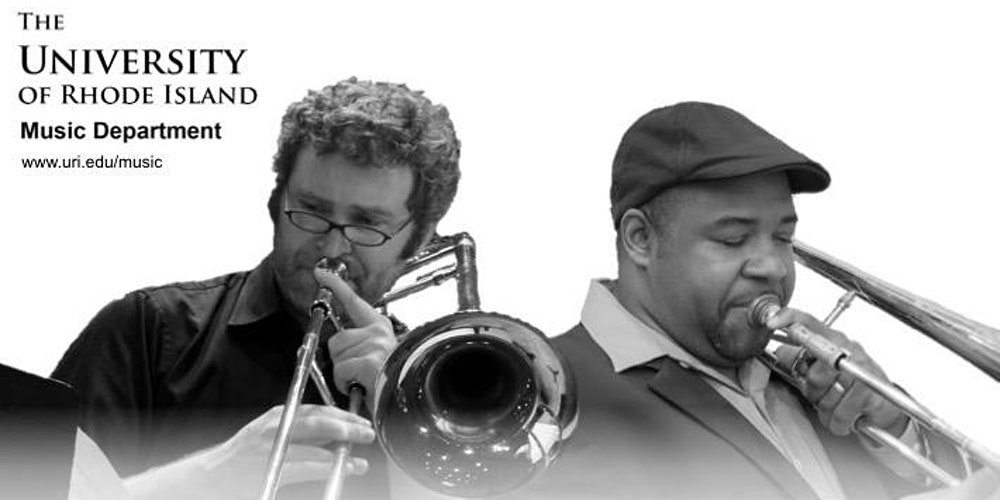 Trombone ensemble slides into our hearts with a modern jazz set from the group “Lenwood Slide Collection”. PHOTO CREDIT: uri.edu

On Thursday, March 24, the Lenwood Slide Collective, a trombone ensemble coordinated by member Jordan Jacobson, an artist and teacher in classic trombone, hit the stage of the University of Rhode Island’s Fine Arts Concert Hall to perform eight pieces in honor of artists that are significant to the members of the collective.

“Tonight’s concert is dedicated with love to James Louis (“JJ”) Johnson, the father of the modern jazz trombone,” Emmett Goods, assistant professor of music and teacher in jazz trombone, said. “This concert is also dedicated to Curtis Fuller, Locksley ‘Slide’ Hampton, Grachan Moncur III and Julian Priester. These distinguished artists and gentlemen have played significant roles in the growth and development of all the trombonists on stage tonight.”

The Lenwood Slide Collective consists of five trombonists who have all worked together and been friends for a long time. The members included Goods, Jacobson, James Burton III, a trombonist, composer, arranger and educator who has lent his sound to multiple Grammy Award-winning albums and Tony Award-winning Broadway productions, Steve Davis, one of today’s leading trombonists according to the program, and John Hassleback Jr., a trombonist and educator who has worked across the United States and Europe with many notable jazz artists such as Jaki Byard, Don Menza, Maynard Ferguson and Chuck Mangione.

The idea of the evening came from the ensemble themselves. “One day, we just sat down and came up with the idea of taking our trombone ensemble and adding the percussion section to it,” Jacobson said.

“In 2021 we lost Curtis Fuller and Slide Hampton. It was really they who worked to keep the trombone at the forefront of jazz,” Goods said. “Slide Hampton’s 1979 record ‘The World of Trombones’ still stands as one of the crowning achievements in the history of jazz trombone.”

For the compositions of the members, they played “The Spin Doctor” by Burton and slowed it down for “Choices” by Davis. For “Choices” the ensemble was joined by four more trombone students, with a total of nine trombones on stage.

The last piece of the night was “Sonny’s Back”, a bebop by Grachan Moncur III arranged by Goods. He described the song as a “blowing sesh” where each member of the ensemble got a solo.

URI Music will be holding performances throughout the rest of the spring semester. For a full list of upcoming events visit the music department’s Eventbrite.