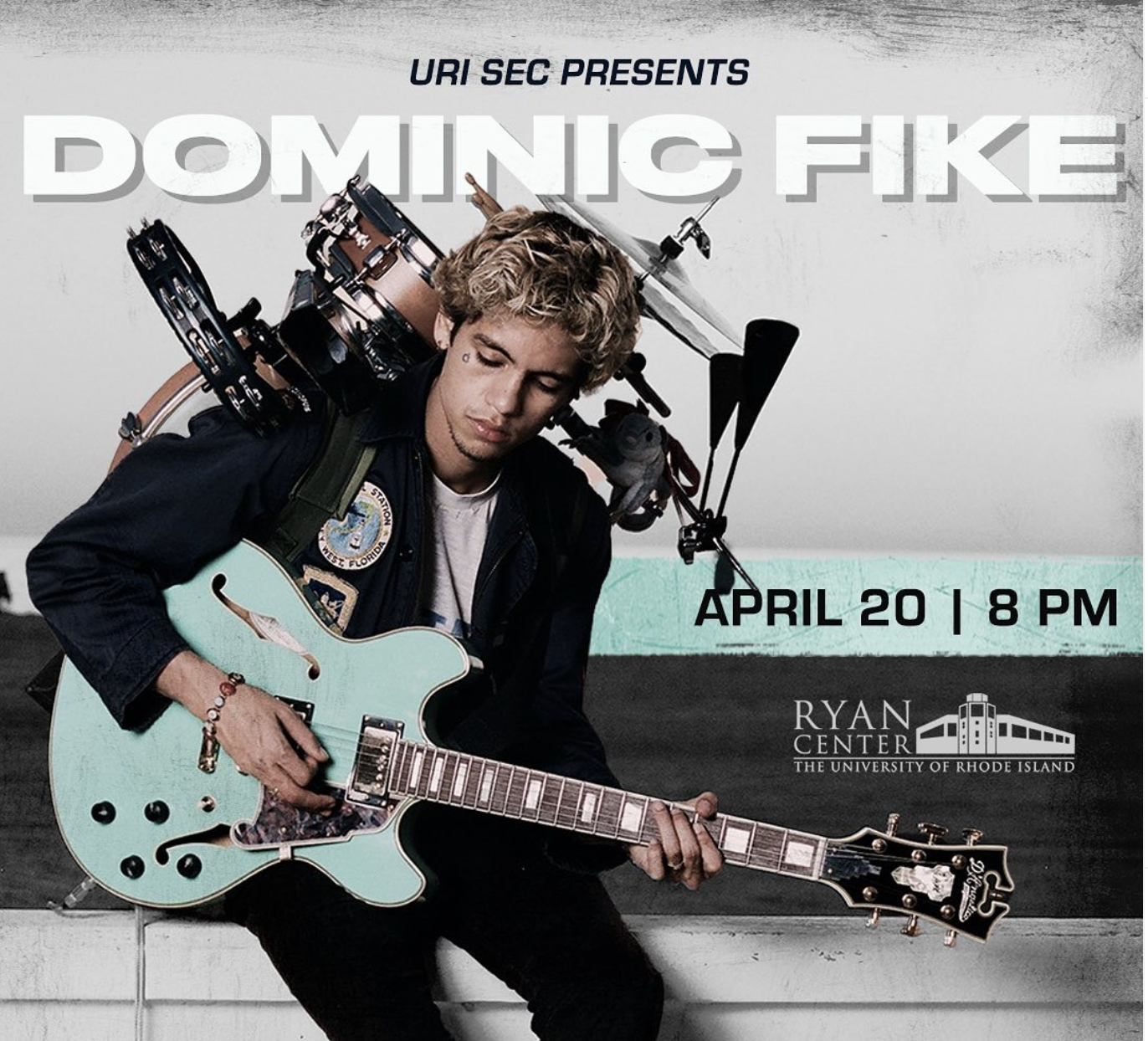 As COVID-19 restrictions are lifted and relaxed on the University of Rhode Island’s Kingston campus, the Student Entertainment Committee (SEC) has announced two big-name events this April with Shaun White and Dominic Fike coming to the Ryan Center.

Fike, singer-songwriter and actor best known for his hit song “3 Nights” and his role as Elliot on the second season of HBO’s “Euphoria,” will lead the first in-person concert at the Ryan Center in over two years. The concert on April 20 will mark the first since rapper Lil Tjay performed on Feb. 28, 2020.

Senior Michael Nortwich was a general member of SEC for three years before becoming the president of the Concerts Subcommittee this past year. He said that some of his favorite memories at URI have been of the concerts that were held when he was an underclassman and he is excited that other students who haven’t been able to experience a Ryan Center concert will have the opportunity to make their own memories on April 20.

“It feels amazing to have another concert at URI since it has been over two years since our last show,” Nortwich said. “I’m just looking forward to seeing everyone’s reaction to having a concert at URI again.”

When it came to deciding on who would be the artist to welcome fans back to in-person concerts at the University, SEC Concerts Subcommittee Vice President freshman Damari Recillas said they hosted a promotional booth on campus to find out what kind of music students were most interested in. As they had expected, rap was the most popular of the genres, but they were surprised to find that alternative music was the second most popular choice.

With previous concerts, booked either by SEC or Platinum Entertainment Group, including Juice Wrld, Machine Gun Kelly, Sheck Wes, A Boogie wit da Hoodie, Lil Tjay and other rap artists, Recillas said they were looking to switch things up while also appealing to student interest in choosing Fike. In 2018, following the release of Fike’s first EP “Do Not Forget About Me, Demos,” Billboard called him a “genre-meshing” artist.

“We really love [student] involvement in anything that we do,” Recillas said. “It’s really important for their, like, intake to make things better and make events better.”

Nortwich added that beyond Fike’s success as a musical artist, his recent rise to fame with his role in season two of “Euphoria” played a factor in their decision-making. According to Twitter, “Euphoria” is the most tweeted about show of the decade so far and only became more popular in its second season which aired earlier this year.

As for choosing White for their “A Conversation With” series that featured late-night host Stephen Colbert last semester, SEC took to Instagram.

On Feb. 26, they posted @urisec a choice between four speakers: speakers–actress, singer and television personality Keke Palmer; YouTuber, podcaster and rapper Cody Ko; actor, comedian, podcaster, producer and writer Rainn Wilson; and Olympic snowboarder Shaun White. They also posted a poll on their Instagram story and found that White received a lot of support. A month later, he was announced to be speaking at the Ryan Center on April 28.

Junior Nate Beliveau-Robinson, SEC VIP Subcommittee president, called White a “cultural icon” and someone who would be recognizable to students regardless of whether or not they followed both his snowboarding and skateboarding careers. Since his first appearance at the 2006 Torino Games, White has won three Olympic gold medals and competed in his final competition at the 2022 Winter Olympics before announcing his retirement.

The “A Conversation With” series features a guest moderator to guide the event along. Beliveau-Robinson confirmed that it will be a URI alumnus and that the announcement on who it will be should be coming out shortly. He added that the one-on-one sit-down allows for students to get a different perspective on a celebrity.

“Because it’s a conversation, it could really go anywhere,” Beliveau-Robinson said. “You can really hear and see what they’re like more as at a personal level almost.”

With these two special events, SEC hopes for students to have fun, entertaining nights where they can learn some things, enjoy music and make memories. Tickets are currently on sale for both “A Conversation with Shaun White” and “URI SEC Presents Dominic Fike.” To purchase tickets and find more information, visit the Ryan Center’s Website.