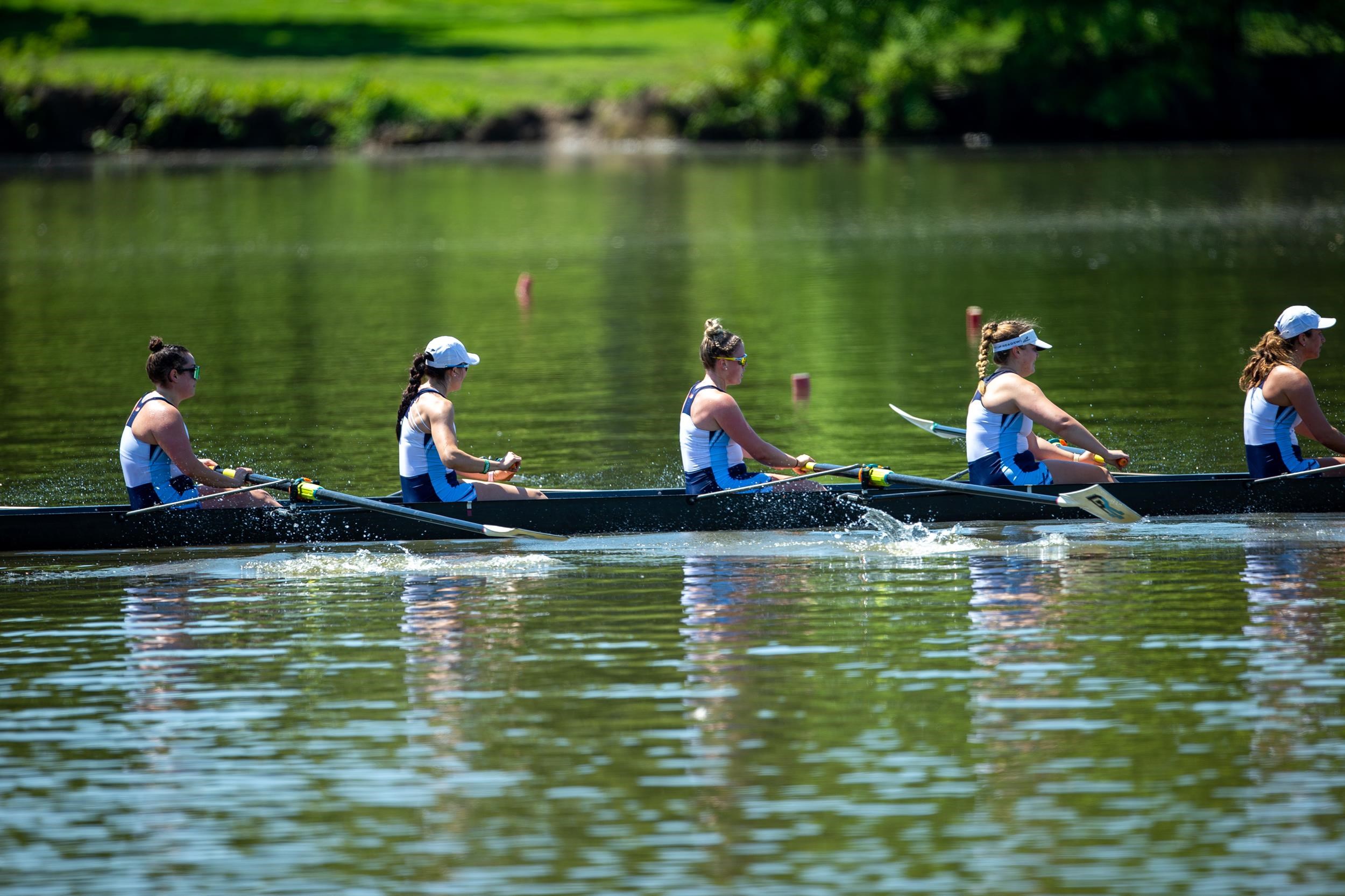 The Rams were dominant all-around this past Saturday, winning three of four races. PHOTO CREDIT: gorhody.com

After their only meet of the season was cut short due to weather, the University of Rhode Island Rowing team returned with a strong performance, winning three of four flights at Overpeck Park over the weekend.

The Rams took on UConn and Marist as well as Atlantic 10 opponents Saint Joseph’s, UMass, Fordham and George Washington in the contest at Overpeck Park in Teaneck, N.J.

The first Varsity 8+ flight started things off for the Rams where they finished in second in both the preliminary heat and finals. The team, made up of coxswain Ellie Mcgee, Catie Castle, Jennae Alexander, Kat Gillies, Nicole Jones, Kathy Zeglen, Hailey Pardi, Julia Fortin and Anna Sampson went toe-to-toe with UMass in a preview of the upcoming A-10 Championships.

While they may not have emerged victorious in the top flight, the depth of the Rams was what allowed them to prevail overall. The second Varsity 8+ flight, consisting of coxswain Alison Gorrarian, Josie Grady, Tinsley Copeland, Morgan Cody, Elizabeth Greason, Emily Drappeau, Emily Olin, Sam Grumpecht and Emory Caswell swept the competition, winning the first heat by nine seconds and the final by 10 seconds.

The Rams continued to ride their momentum heading into the third Varsity 8+ and Varsity 4+ heats. The 4+ team of Caitlyn Muteru, Sammi Gorrecki, Olivia Kowalski, Jessica Tosi and Alexis Moore scraped out a first place finish, defeating the Minutewomen by 10 seconds in the prelims and edging out George Washington by five seconds in the final with a time of 7:55.158.

By winning three of the four flights and coming in second in the other, the Rams took home a dominant victory in their first full weekend of racing this season. Head Coach Shelagh Donohoe said she saw improvement from her team over the weekend, but says there’s some minor kinks to work out over the course of the season.

Sampson, who played a big role in the second-place finish for the top flight, emphasized the importance of depth in order to win meets for the rest of the season.

“We realized how important depth is,” Sampson said. “We may not have won the top flight, but if we can win the second, third, and fourth races, we will win every time.”

As they have been in years past, the Rams are deep and talented and more than capable of a big performance at the Atlantic 10 Championships next month. However, Sampson believes there is one more step to becoming the best team they can be.

“We have the fitness,” Sampson said. “We worked so hard in the offseason to make sure we were good on fitness. It is good because we don’t have to worry about that anymore and we can just focus on some technical things. I think we will be just fine.”

The Rams will have another shot to improve when they head to Boston on Saturday to compete against BU and Northeastern with a start time of 10 a.m.