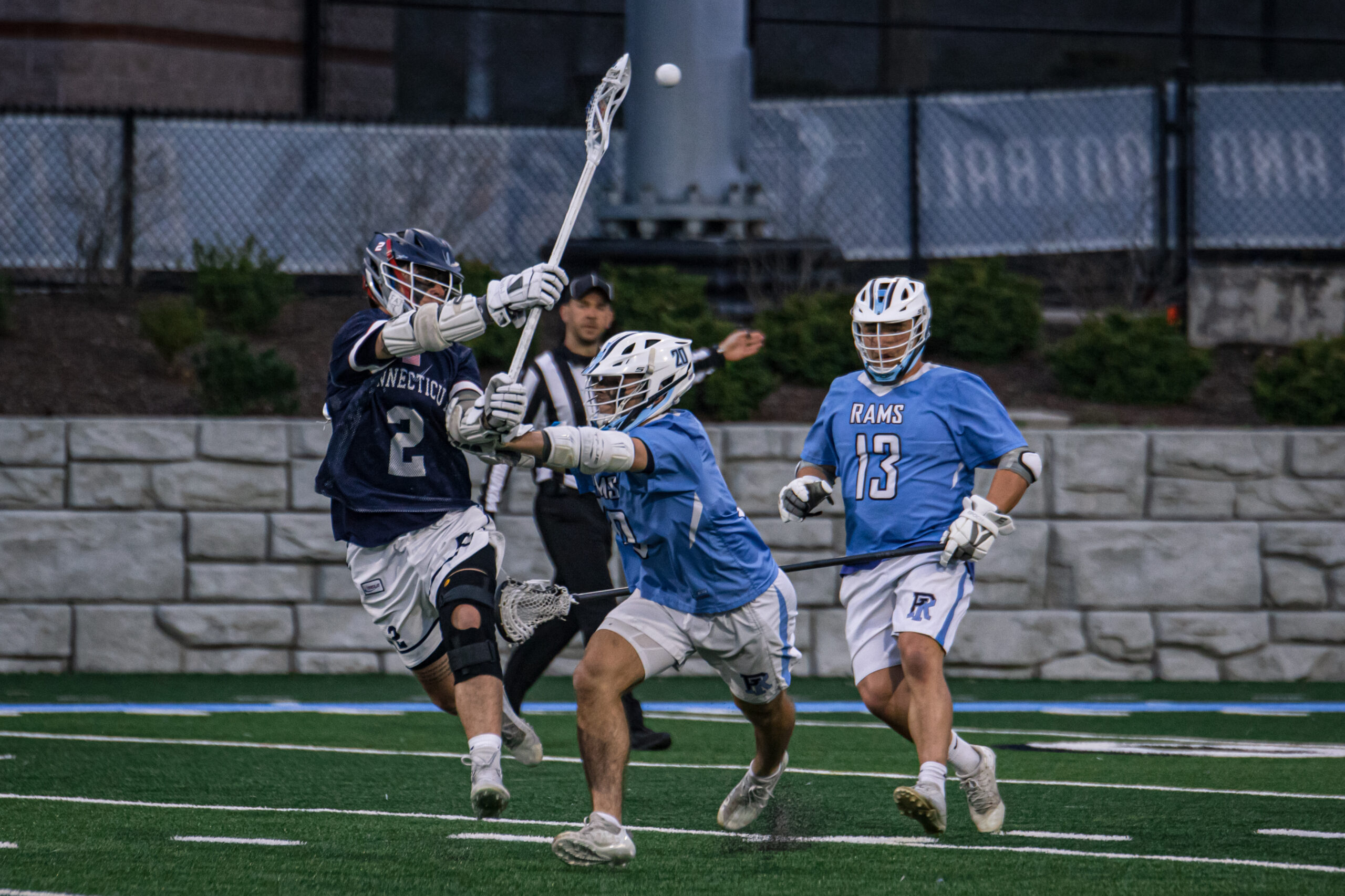 The Rhody Men’s lacrosse honored their eight seniors ahead of their final home game of the season against UConn last Thursday before the visitors spoiled the festivities, beating the Rams 15-12.

After a cagey start from both teams, UConn opened the scoring four minutes in when sophomore attackman Jack Tousignant attacked from behind the net and scored a wrap-around goal to give the Huskies the opener.

Three and a half minutes later, the Rams got on the board when Keegan Reilly hurled a 15-yard heater into the top shelf and tied things up with six minutes to go in the first stanza. The Rams followed that up when sophomore midfielder Adrian Rutkowski dodged from behind the net and scored to put the Rams up 2-1.

The Huskies added another goal to their total in a man-up scenario when sophomore midfielder Colby Powers followed up a missed opportunity and performed a scoop-and-score maneuver to tie things up heading into the second quarter.

In the second quarter, things opened up for both teams. Tousignant who got things started with another unassisted goal that put UConn up 3-2. White responded shortly after when, off a clearance, he took his man one-on-one and snuck in a spot past the goalie for his first of the game.

Rhody followed that up with a great play from freshman midfielder Heath Kennedy took on two defenders and then ran the length of the field before dishing it off to attackman Anthony Guarino for the goal to make it 4-3.

Rhody built on that lead with White ripping a man-up goal on an assist from Reilly, but UConn responded swiftly, scoring four unanswered goals to take a 7-5 lead into the half.

URI started the second half hot with a 4-1 run to take a 9-8 lead in the first few minutes. Powers tied it up at nine with two minutes left in the third quarter to tie it up and thirty seconds later, the Rams responded with another Guarino goal. Both teams scored once more before the quarter ended at a 10-10 tie.

The fourth quarter was all Huskies as they strung together four unanswered goals to give them a 14-10 lead with eight minutes left. Reilly was able to tack on two more to his total, but UConn added an insurance goal and was able to walk away with a 15-12 win.

Afterwards, Head Coach Larry Madeira expressed frustrations with the team’s performance at times, but also reflected on his senior class.

“I thought we beat ourselves, we gave them several goals and, if you take those mistakes away, we would have won that game,” Madeira said. “But I am going to really miss these seniors, I have been coaching some of these guys since fourth grade.”

White, being one of those players, also had a chance to reflect on a rollercoaster career at URI.

“It’s been a whirlwind,” White said. “COVID had a big effect on last year and the year before, but it’s kind of crazy to see how far this team has come from practicing on the grass fields back at Plains to playing on the new turf and being ranked fourth in MCLA DII.”

While they have come very far from White’s freshman year, their season is not over yet. The Rams take on Maine in their final game of the season before kicking off the MCLA Division II playoffs this Saturday. That game will start at 4:30 p.m. at Narragansett High School.