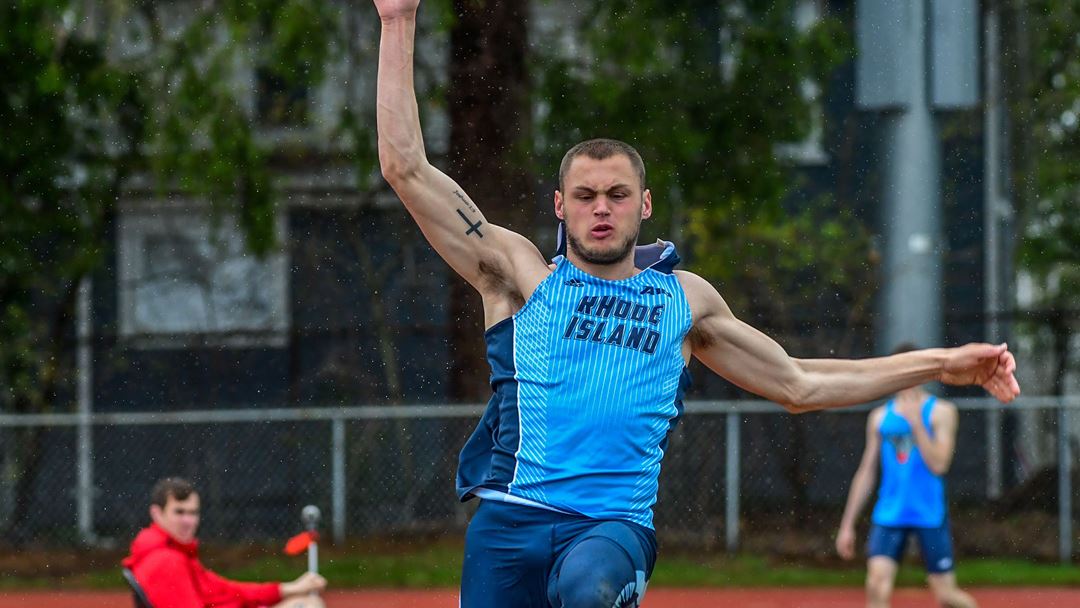 Senior Jack Reichenbach’s performance in the high and long jump helped him earn A-10 Field Performer of the Week honors. PHOTO CREDIT: gorhody.com

The University of Rhode Island Men’s Track and Field team finished second with 164 team points, 13 points behind first place Dartmouth at the Northeast Challenge at UConn this past weekend.

Head Coach Trent Baltzell had only good things to say about how the team did in their performances.

“There wasn’t much bad honestly, overall it was just a good meet,” Baltzell said. “I’d say it was one of if not our best track meet of the regular season.”

Of the performances, the best came from the decathlon team of Stephen Cirella, Ryan Tona, Wyatt Lamell and Devin Donahue, with each athlete doing well in different events.

Donahue led the way for the group, finishing second with an accumulation of 6,870 total points. Behind him in third place was Cirella, who had 6,731 total points. Coming in fourth and sixth were Lamell and Tona, finishing with 6,577 and 6,527 total points respectively.

“I think competing against high caliber schools, like what we faced this weekend, will certainly help us prepare for the [Atlantic] 10 Championships,” Cirella said. “For me personally, having teammates there to help support you and push through struggles and tough events, that’s what will help us going forward.”

The 100-meter dash had three Rams running, with Nate Barjolo placing third at 10.648 seconds. Abraham Tambah followed with a seventh place finish, clocking in at 10.76 and Jordan Ross placing 27th with a time of 11.10 seconds.

Kai Schmidt-Bilowith was the lone runner for the Rams in the 110-meter hurdles as he placed third with a time of 14.47 seconds.

Jolon O’Connor placed the highest for URI with a third place finish in the 200-meter dash, clocking in at 21.40 seconds. Barjolo and Tristen Howard both placed sixth and seventh with times of 21.60 and 21.62 seconds.

In the 800 meters, the best times for the Rams were by Collin Ochs and Eli Baker. Ochs had a time of 1:49.29 in a first place finish, and moved to second best time in program history, as well as earning A-10 Men’s Outdoor Track Performer of the Week. Baker had a ninth place finish with a time of 1:53.88.

Kellen Waters had the best time in the 1500 meters for the Rams, finishing third at 3:46.26, setting a new school record. Tyler Rubush in seventh and Aidan Kindopp in 27th.

The 3000-meter steeplechase only had Eric Zulkofske competing, in which he finished second with a time of 9:44.57.

In the discus throw, Derek Jacobs had a fourth place finish with a distance of 51.62 meters, followed by Christopher Tavarone coming in 10th and Nick Morse in 12th.

Top 5 finishes by the Rams in the hammer throw had Sam Bond coming in third, throwing 59.44 meters, Jide Akinjisola in fourth at 57.71 meters and Johnathan Buchanan in fifth at 57.65 meters.

Jack Reichenbach placed second in the high jump, leaping 2.08 meters and earning A-10 Men’s Outdoor Performer of the Week. He also finished in third in the long jump with a jump of 7.25 meters.

“There’s always room for improvement, but we had a ton of [personal records] being broken, so that’s always a big thing to takeaway from these meets,” Baltzell said.

The team will continue the outdoor season this Tuesday when they take on Holy Cross, MIT and New Hampshire in a dual meet hosted by Holy Cross.

“This is a good opportunity for everyone to work on things,” Cirella said. “We all know what we need to work on and have talked with coach about it, so now it’s all about improving before A-10s.”