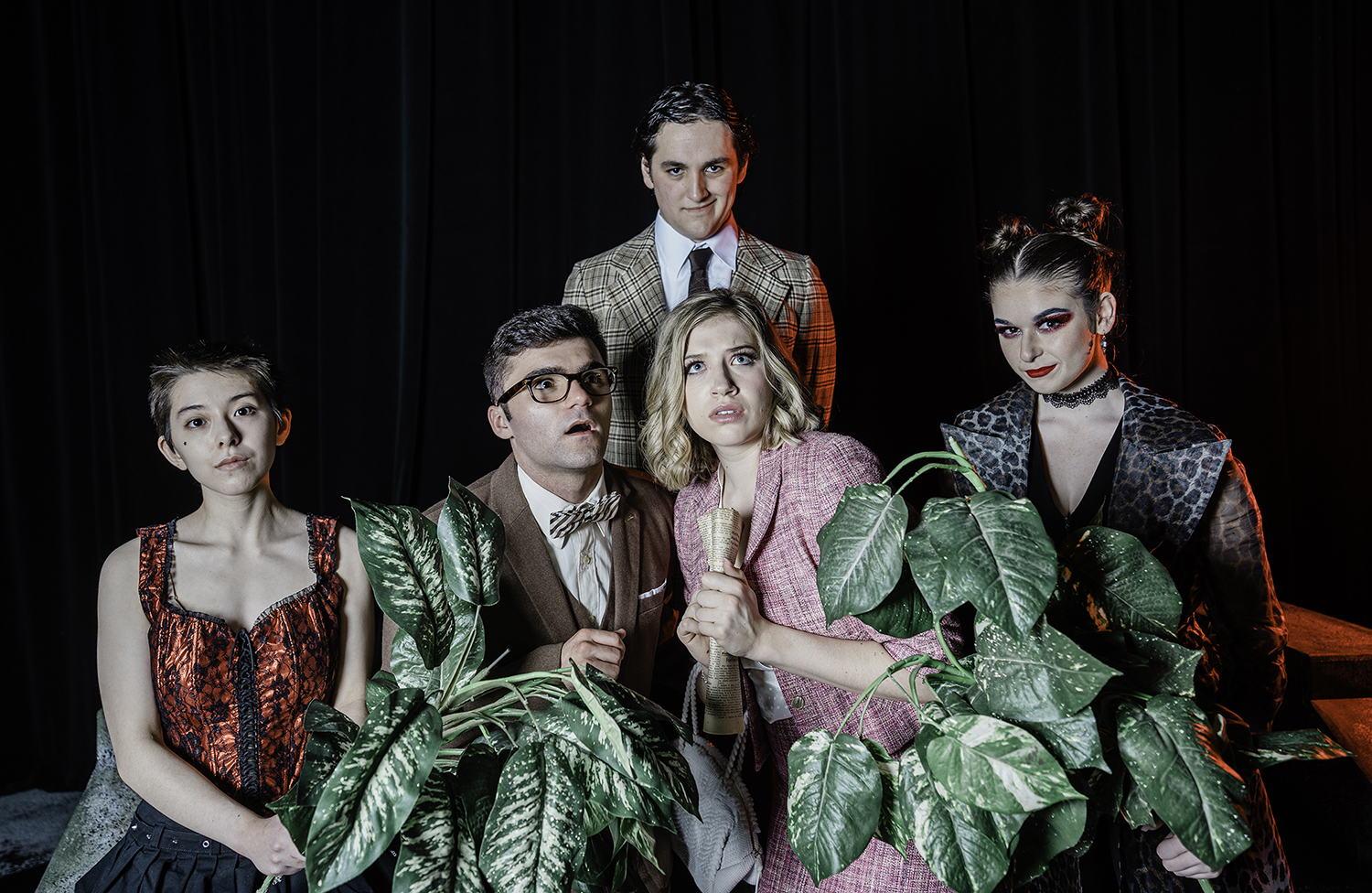 The joy of musical theatre has returned to the University of Rhode Island campus with the URI theatre department’s final production of the year, “The Rocky Horror Show,” which opened last Thursday and will hold performances through Sunday, May 1.

Due to the COVID-19 pandemic and previous mask restrictions in place, there hasn’t been a musical theatre production at the Fine Arts Center since “A Little Night Music” in the spring 2019 semester. After a production of “Spamalot” was cut short in 2020 following a rehearsal process, and again in 2021, “The Rocky Horror Show” has proven itself to be the perfect fun night at the theatre for URI to mark its musical return.

“Rocky Horror” tells the story of a newly-engaged couple, Brad and Janet, who end up in a strange, unplanned adventure when their car breaks down and they find refuge at the mansion of Dr. Frank-N-Furter, “a sweet transvestite from Transylvania.” However, it’s not necessarily the plot, which grows more ridiculous by the minute that makes this show such a great time.

With book, music and lyrics by Richard O’Brien, the show first opened on the West End in 1973 and was soon adapted into the iconic 1975 film “The Rocky Horror Picture Show” and achieved immediate cult status. Fans attending screenings of the film brought their own theatrics to the movie theaters with actors performing the show in front of the screen and audience members bringing props and scripts to follow along with their own call-outs which both elevate the material and make fun of it.

Prior to opening night on April 21, I had seen the film, its 2016 remake and performance screenings here at URI performed by RKO Army but never the “Rocky Horror Show” without the “picture” element. I absolutely loved it.

I wasn’t sure what to expect in terms of the audience participation I’d become familiar with in previous experiences. However, from the moment “Science Fiction Double Feature,” performed brilliantly by junior Riley Nedder, there were a number of audience members prepared with callouts, singing along and asking questions that were promptly answered by the lyrics. Some of the callouts can be explicit or vulgar and imbue the book and lyrics with a double meaning that wasn’t there originally, but many seem inextricably linked with the show and, all-in-all, make for an even better viewing experience.

As Trixie, a character who exists outside of the general plot, Nedder was allowed to make her own callouts back at the audience, making it truly interactive. The same can be said for freshman Justin Peters as the hilariously straight-laced, deadpan Narrator who built a great rapport with the rowdy audience who kept coming for his neck, quite literally–I don’t know if I’ve ever heard that many neck jokes in one sitting before.

Once the show really gets going, it’s nonstop fun from start to finish, from “The Time Warp” to “Rose Tint My World” to a curtain call that makes you want to get up on your feet and dance with the energetic cast. “It’s not easy having a good time,” Frank-N-Furter says at one point but it was the easiest, most fun time I can recall having at Robert E. Will Theatre in my four years here at the University.

As Frank-N-Furter, junior Ben Perreira was an obvious, immediate standout, strutting across the stage confidently in a corset, pearls, heels and not much else. Along with the ensemble, or Phantoms, and the rest of the performers, Perreira keeps the energy level at a 10 from the moment he is revealed to the moment–spoiler alert–he is zapped by Riff Raff. Senior Carleigh Boyle hits all the right notes as Riff Raff, bringing her great vocal range to the score.

In the leading roles, junior Olivia Humulock and senior Aidan Costa portray Janet and Brad’s character development, spurred on by their own respective sexual awakenings, to great effect. Humulock gets deserved, roaring applause in “Rose Tint My World” and Costa’s sweet, wholesome “Once In A While” provides for a great moment to pause and appreciate the show before things become truly crazy with the arrival of Dr. Scott.

Sophomore Liam Roberts pulls impressive, hilarious double duty as both Dr. Scott and Eddie and the main cast is rounded out by transfer student Justin Noah in a shining turn as Rocky himself, junior Paige D’Iorio as the comedic Magenta who pulls out a few big notes of her own and junior Courtney Satterley in, what I believe to be, the completely underrated role of Columbia. Satterley captures her hilarity, heartbreak and naivete perfectly.

Beyond brilliant performances, the show really comes together via the visible onstage band, the set which transforms the stage into the creepy mansion at Frankenstein Place and the warm, yet electric lighting. When Dr. Frank-N-Furter visits Brad and Janet’s room separately in disguise, it’s not just a laugh-out-loud moment thanks to the actors, but it’s visually stunning through the use of curtains and lighting.

URI Theatre’s production of “The Rocky Horror Show” made me want to hurry home and learn all the call-outs, just so I can go back again to see the amazing production and feel that rush of audience participation that has been lacking due to the pandemic.

Performances will be running nightly at 7:30 p.m. through April 30, followed by a closing 2 p.m. matinee on May 1. Tickets can be purchased at the box office located in the Fine Arts Center or online.