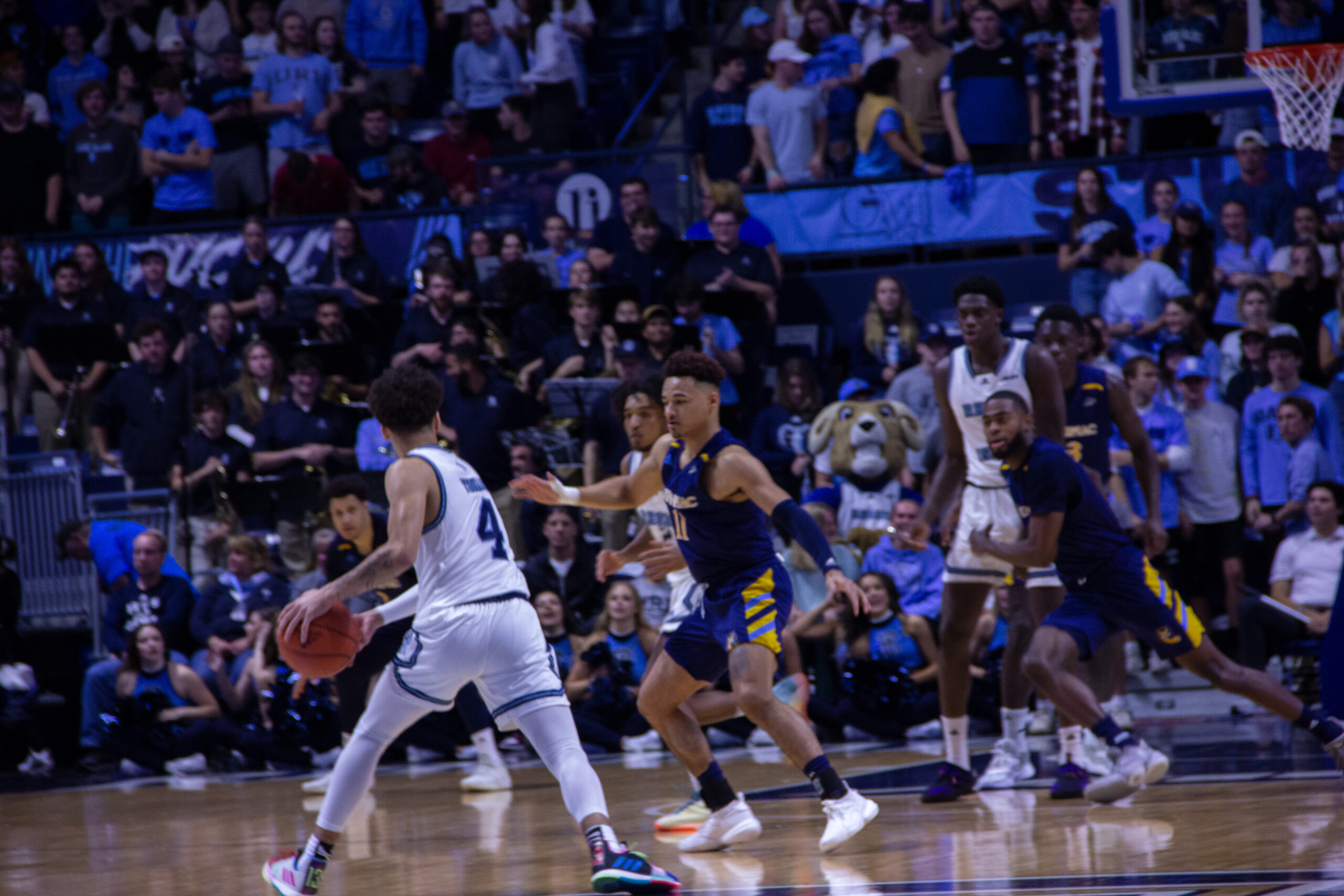 The beginning of a new season and a new era in Rhode Island men’s basketball under Head Coach Archie Miller began Monday when the Rams welcomed the Quinnipiac Bobcats to the Ryan Center.

It was a roller coaster ride in Kingston that saw the Rams go down by as much as 12 and tie it up in the second half, but ultimately, the teams’ growing pains showed, and the Rams fell 67-62.

The first half was a back-and-forth affair. Redshirt second-year forward Alex Tchikou carried the Rams offensively early on, scoring five of his seven points in the first ten minutes of play, and a couple of big buckets from second year guard Sebastian Thomas and fourth year forward Malik Martin had the Rams within one with 10 minutes to go in the half at 21-20.

However, some huge second-chance points from Quinnipiac’s Ike Nweke would extend the Bobcat lead to three before the half. The graduate transfer from Columbia had all 13 of his points for the night in the first half, giving Quinnipiac the 34-31 advantage at the break.

The second half saw the Rams surrender a 9-0 run to the Bobcats that would eventually widen the deficit to 10. Big buckets from redshirt junior Abdou Samb and Thomas kept the Rams within striking distance, but a timely three from Quinnipiac’s Tymu Chenery and a bucket from Luis Kortright, the game’s leading scorer with 15 points, gave Quinnipiac a 52-40 advantage with 12:20 to play.

A lineup adjustment from Miller that called for both big men, Samb and Tchikou, to be on the floor simultaneously, allowed for a string of defensive stops from the Rams that led to easy buckets from Thomas and second year guard Ishmael Leggett on the fast break. The Rams crawled all the way back and used a 10-3 run to tie the contest at 60.

Miller said the lineup adjustment gave his squad more comfort on both ends of the floor as it is a lineup the squad is more familiar with.

“It definitely helped us out,” Miller said. “That was a lineup that we used a lot in the preseason with guys out, it definitely allowed us to match up with their big guys. I wish I had gone to that a little earlier, and that’s on us as a coaching staff.”

In the end, it was the experience and chemistry of the opposing Bobcats that got the better of Miller’s brand-new squad. More timely baskets from Kortright and Bobcat point guard Dezi Jones proved too much for Rhody, and the Rams fell 67-62 in the opening game of the season.

When asked whether or not there were positives to take away, Miller was sure in stating that a win is the most important positive.

“There are no positives when you lose,” Miller said. “Were there some bright spots and some things some guys did well? Yes, but you ultimately have to win the game.”

Despite the loss and the disappointment that came with it, Miller and his players were not worried about the future of the season and still remained confident.

“We knew there was going to be some rust and some adjusting that had to happen,” Miller said. “We just have to get back to practice and focus on getting better and playing Texas State on Saturday.”

Martin, the only fourth-year player on this year’s squad, echoed Miller’s statement, saying that there were strides made during the game.

“Obviously not great to lose,” Martin said. “But I think you saw some flashes of what we can do. We will be totally fine.”

The Rams will have another shot at Miller’s first victory on Nov. 12 when they welcome Texas State to the Ryan Center, with tip-off set for 4 p.m.