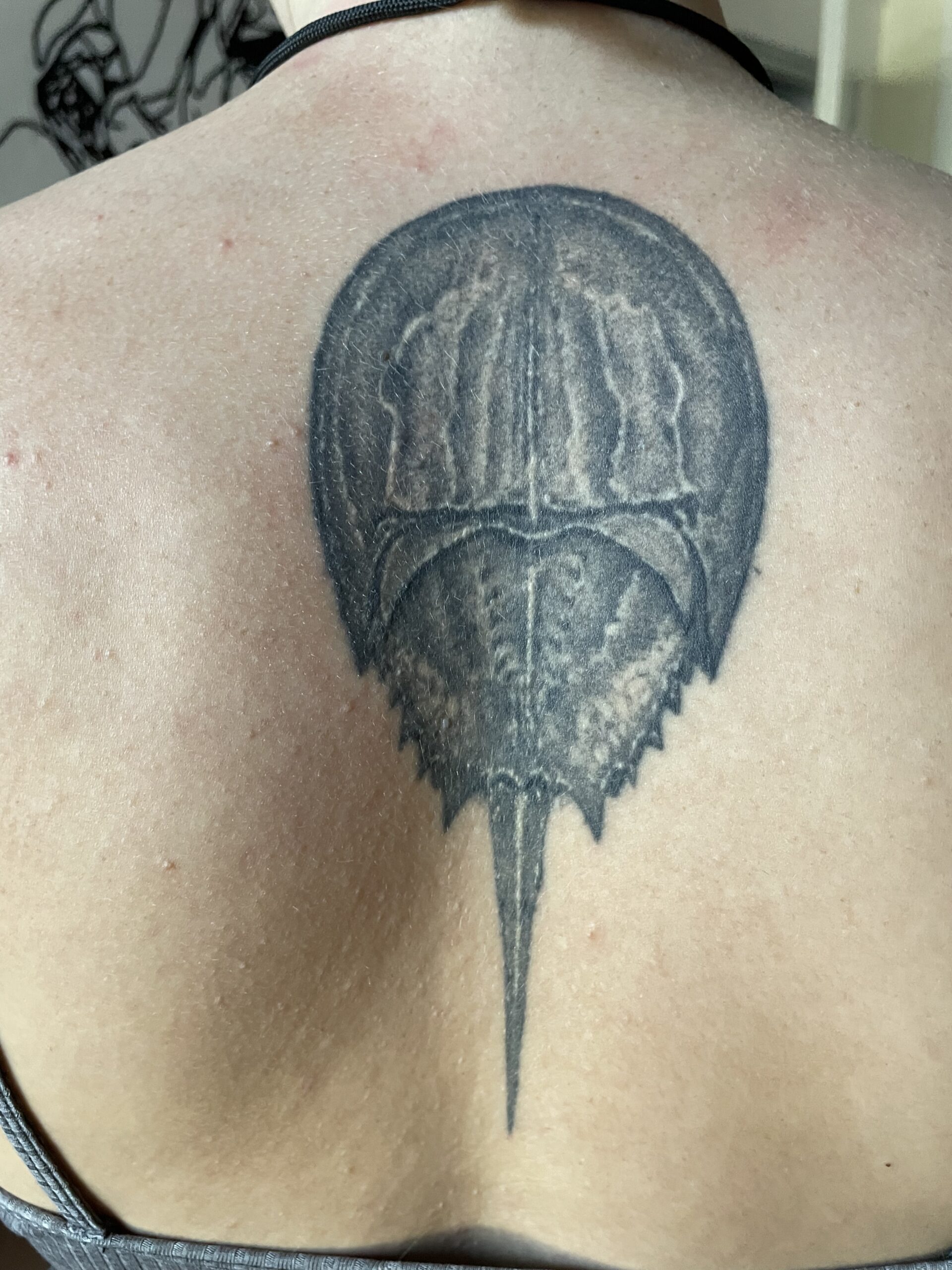 Bryn Mulligan, a fifth-year wildlife and conservation biology major, got her first tattoo, a stick and poke of Saturn, at the age of fifteen. Her first professionally done tattoo was etched into her skin on her eighteenth birthday, and she has accumulated ten more since that day.

The art on her body is vast and seemingly sporadic in both size and placement, but everything falls into a specific design that Mulligan intended.

Currently, Mulligan has five pieces on the right half of her body and six on the left, with one outlier perfectly in the middle. The right tattoos include a small pattern on her toe, the aforementioned Saturn stick and poke near her armpit, a Taurus stick and poke on her finger, a massive turkey tail mushroom enveloping her upper arm and a lily flower on her wrist to represent her dog Lily. On her left side, she has a stick and poke of a wave, a sea fin, a seahorse on her arm near the bend of her elbow, a starfish on her foot, a shark outline on her ankle and a “weird little fish” as she put it, on the side of her foot. The remaining outlier is a big horseshoe crab that resides on the back of her neck. Although she admitted, “sometimes they’re on land,” so the horseshoe crab can fit well between a marine creature and a land creature without disrupting her artistic plan.

“I never consider how it’s going to feel,” Mulligan said when asked why she chose to get her tattoos where she did. “I think I was just thinking about it aesthetically, where I’d like it to be, and I did not plan on how bad it would hurt.”

However, while the potential pain may not matter to Mulligan, the care she feels for the object of each tattoo matters much more. The seahorse on her left arm is no taller than an index card, but the turkey tail tattoo is close to the length of a ruler.

“I care more about this kind of mushroom than I do about a seahorse, so the mushroom is really big,” she said.

The turkey tail mushroom, the tattoo on her upper arm, contains a variety of antioxidants and other compounds that may help boost one’s immune system, and some say it can help fight certain cancers.

In addition to her turkey tail, her horseshoe crab is also highly detailed and takes up quite a bit of space on her bodily real estate.

“I think that the things that are the most beautiful, I put the most money into because I wanted the details to be noticeable from far away,” Mulligan said.

The cost of tattoos is something Mulligan has been aware of for years and, like most people who want tattoos, has to wait for the money to come in before it can be put to use.

This kind of forcible planning stage is something that Mulligan never seemed to mind.

“I had planned on the crab for a long time,” Mulligan said. “Some of them I put a little less planning into, but I know when I want the tattoo, and I also have never regretted one.”

In spite of her belief that many of her tattoos don’t have much meaning aside from her lily, it is clear that Bryn Mulligan has a passion for not only the art she puts on her body, but the greater world that both marine and land creatures share. Like the horseshoe crab residing on her back, she seems to have a perfect and equal amount of love for marine life and land life.

Markings, Meanings, Everything in Between: Students tell the stories behind their tattoos, part 19

Markings, Meanings, Everything in Between: Students tell the stories behind their tattoos, part 18

Markings, Meaning, Everything in Between: Students tell the stories behind their tattoos, part 17