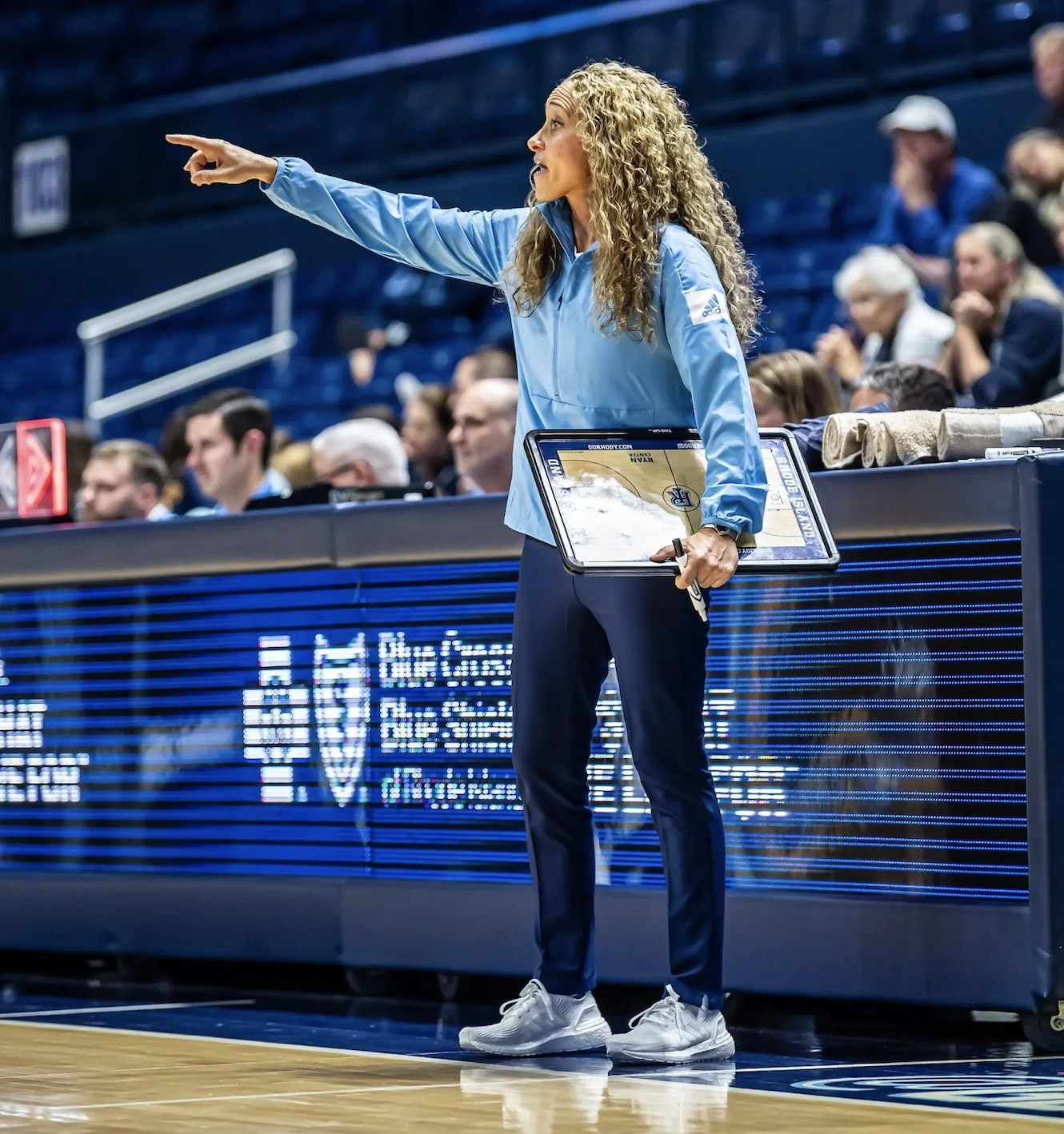 In early 2019, fans didn’t have a lot to be excited about when it came to the women’s basketball team at the University of Rhode Island. Over their final 21 contests, the Rams only mustered three wins in what seemed like a yearly cycle of disappointment for the program.

Over the past three years, the program under her leadership has become almost completely unrecognizable. Rhode Island has since become a powerhouse in the Atlantic 10, culminating in a 2021-22 season that saw the team finish with a program-record 22 victories and their second-ever playoff berth with a trip to the Women’s National Invitational Tournament (WNIT) last March. On top of that, it’s become a top destination for top talent throughout the sport, both within the United States and across the globe.

If you were to ask Coach Reiss, though, all the credit goes to her players and the rest of her staff.

“A lot of times I get the credit, [but] it’s really not me,” she said after her 50th career win against Southeast Missouri State on Nov. 26. “I recruit great players, and I recruit even better people to be on the staff.”

At first, the process wasn’t easy. According to Reiss, she took over a team in late 2019 that still had a number of concerns on and off the court, to the point where some players were disciplined with suspension. While the team still improved in the win column from the year prior, sacrifices were made in the name of establishing strong team values.

“To get by it is very tough in the beginning,” she said. “We took a lot of L’s because of it, but we held true.”

Since taking over, Reiss and her staff have prioritized one thing: character. While talent on the court is vital to success, she says, it’s the off-the-field traits — patience, kindness, and compassion — that are the foundation of the program.

In fact, according to Associate Head Coach Adeniyi Amadou, helping grow each player into the best version of themselves is the number one priority of the staff — more so than even the results on the court.

“Sometimes, it’s just X’s and O’s, winning and losing,” Amadou said. “But that’s not how we see it. We want to be absolute guardians of that mindset, that mentality, that philosophy that, for us, it has to be about things that are greater than the game.”

Two players that were pillars of the program for the first three seasons of the Reiss era were Emmanuelle Tahane and Marie-Paule Foppossi. Both French natives, now starring professionally overseas in France for Charleville-Mézières and Tarbes, respectively, in the Ligue Féminine de Basketball (LFB), immediately connected with Reiss and the staff and were drawn to her care for her players beyond the game.

“Coach Reiss genuinely cares about us and wants us to be happy,” Tahane said. “A lot of coaches just care about your skills, but Coach Reiss knows that if we are in a good mental state and focused, we will perform at our best.”

Tahane and Foppossi were part of the staff’s effort to turn the program into a destination for athletes from all around the globe.

“Coach Reiss and Coach Amadou were the people that got me to the U.S., and they have always been there for me,” Foppossi said. “When I heard that they were going to Rhode Island, I talked to them and decided to transfer [from Syracuse University].”

While they were forced to sit out their first season at URI due to NCAA transfer regulations, they returned for the 2020-21 season, leading the Rams to an 11-8 overall record and a trip to the A-10 quarterfinal round.

For Reiss, recruiting internationally helped give the program an immediate boost that it had not seen in years past. Inheriting a team that had been perceived by some as a “losing American program” over the years, bringing in talent from Europe allowed the staff to strictly bring in talent based on their bond with the coaches and their potential to be developed to a high level.

“It was very easy to get that international player, a lot easier than getting an American, so that’s why that came to fruition,” she said. “We had a plan on how we were gonna build this together, and it started the day I met Adeniyi and saw him and his ability to recruit internationally.”

Amadou, who first began working with Reiss when he rejoined Syracuse’s coaching staff in 2016, has been at the center of recruiting internationally during his time in Kingston. A native of Paris, France, he has helped bring in 15 international players over four seasons, with nations including France, Canada, Israel and Estonia being represented on the current squad.

Of those international players recruited, Tahane, Foppossi and Johanna Muzet (France) have all made the jump to the pros, along with Marta Vargas (Portugal), who has been with the team since 2017. With an established track record of success, Amadou believes that URI has established a strong path to success for recruits across the world.

“Their experience, their success, the success that they are enjoying now, the kind of people they are, validates the way we’ve been going about things,” he said. “It’s wonderful, really, and they are just beginning their lives.”

Additionally, the transfer portal has become a major factor for the program in recent

years. With the NCAA granting all players an extra season due to the COVID-19 pandemic, as well as transfers no longer needing to sit out a season between teams, Rhody has been able to bring in a wealth of experienced talent over the last few years.

Last season, former Providence guard Chanell Williams and Seton Hall forward Dez Elmore made up a consistent duo in the Rams’ starting lineup as graduate transfers. This year, the staff added yet another experienced core in Emma Squires, Madison Hattix-Covington, and Sayawni Lassiter.

For Reiss, coaches at the collegiate level have essentially embodied the same role general managers have at the professional level.

“It’s free agency, and you essentially become a GM,” she said. “If there’s a player that opens up that can help us win and fits our culture, you better believe we’ll go after them.”

Over the last four years, Rhody has also had key consistency within the coaching staff. Under Reiss, Amadou and fellow Associate Head Coach Megan Shoniker have been part of the staff for all four years of her tenure. And to Reiss, none of the program’s success would be possible without them.

“They’re everything to the program,” she said. “Without my staff, I’m nothing. I trust them to no end. If I were to get sick, Coach Amadou could coach the team and be just as successful. If Coach Amadou were to get sick, Megan Shoniker could coach the team and be successful. We are a we, and I rely on them heavily.” With Reiss and company now set in place for the long haul following her 10-year contract extension last spring, her staff is hoping to set the bar of championship excellence with Rhode Island’s women’s basketball program — both on the court and in the classroom.