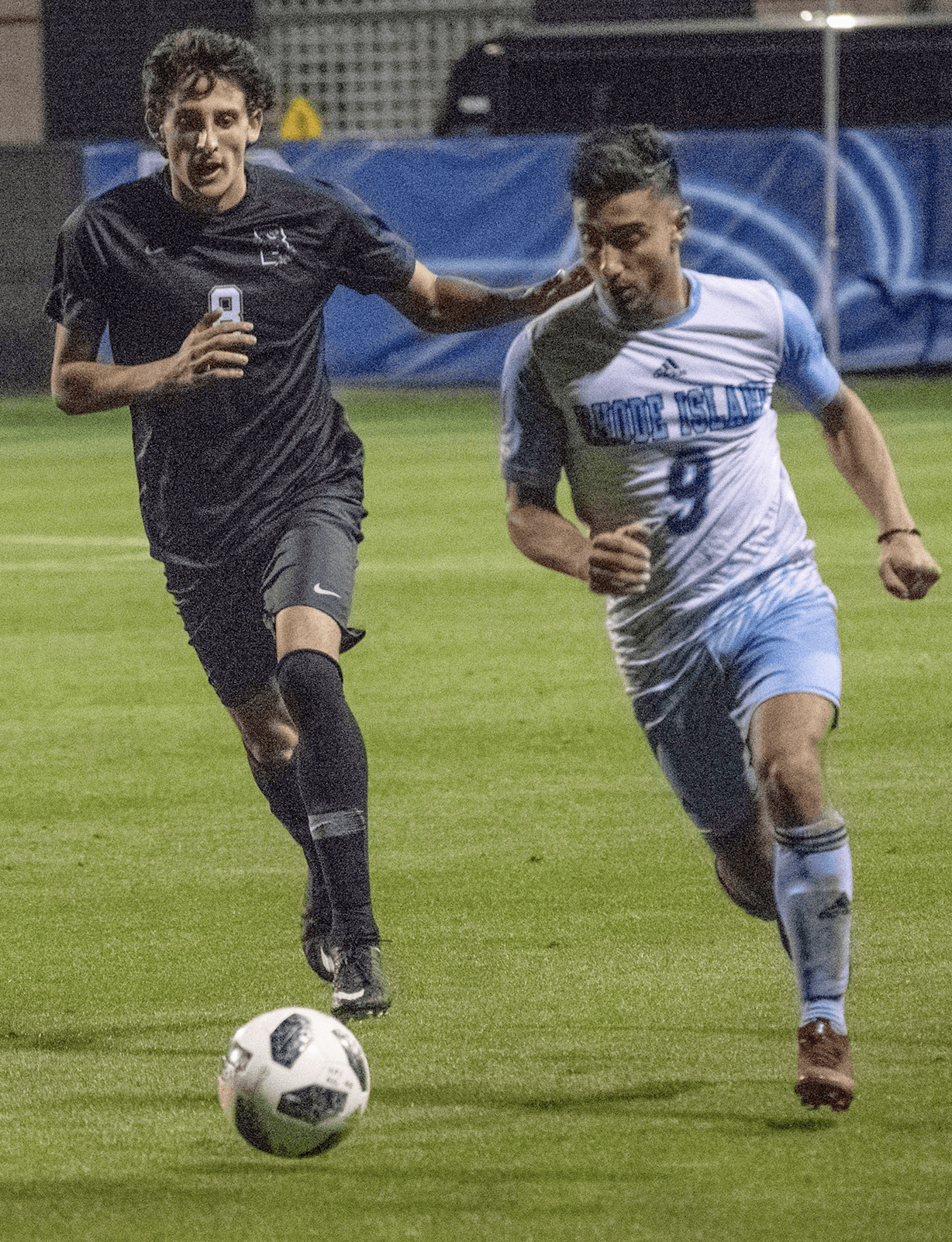 Photo by Anna Meassick | Stavros Zarokostas drives the ball downfield during the second half of the game.

The University of Rhode Island Men’s Soccer suffered their first defeat of the season Saturday night, losing 1-0 in double overtime to rival Brown University. Their loss signaled the end of their shutout streak, ending at a mind-numbing 649 minutes.

The Rams entered the game ranked No. 23rd in the nation, coming off a 3-0 shelling of Providence College. Brown, on the other hand, entered the game as an underdog, having lost their previous three games.

Brown was anchored by Max Gross, their sophomore goalkeeper who earned the first shutout of his collegiate career. This also marked the first time the Rams had been shutout all season, and only the second time this season the Rams had been held to one or fewer goals. Sixth-year URI coach Gareth Elliott noted that the offense underperformed on the field. “We have a lot of attacking weapons,” Elliott said.”We just didn’t seem to click going forwards.”

On the back end, it was also the first time the Rams surrendered a goal this season. Penske matched his career high in saves during the course of the match, however, Elliott said that the defensive effort could’ve been better as a whole. “It’s hard to take too many positives when you lose with less than a minute to go in double overtime,” Elliott said. “I don’t know tonight defensively if we were on the same page.”

The first half of the game was fairly even, with both schools getting several quality shots off on the opposing goalkeeper. The Rams held a decisive advantage in corner kicks, tallying 10 in the first half alone.

The second half proved to be a little more exciting, seeing two yellow cards for Brown within the first 15 minutes. The aggressive style of play from Brown saw several Rams hit the turf and stay down, prompting Elliott to send in four substitutes over the course of the match.

“We had a few guys that had to fill in today so we got some guys valuable experience. A lot of guys got a lot of minutes,” Elliott said.

Early in the second half, Brown seemed to have a decisive advantage. Daniel Schiller broke free from the URI defenders and got off a curving shot around Penske, however it hit the post and bounced harmlessly away from the goal. The Rams also got a quality chance late in the game, coming off one of their many corners. Garrett Cronin deflected a header in on goal, but like his counterpart on the far side of the field, Gross stood tall and turned the shot aside.

The Rams best chance of the night came in the first overtime frame, with Edvin Akselsen barely firing a shot wide of the post. The Bears responded in the second overtime, with Matthew Chow, one of the team’s substitutes, cashing in on a pass from Zac Anderson. With 58 seconds left in the game, his shot ended the Ram’s perfect season bid, along with the team’s shutout streak.

The Rams will face what could be their biggest test of the season on Saturday, opening up Atlantic 10 play against the Fordham Rams.