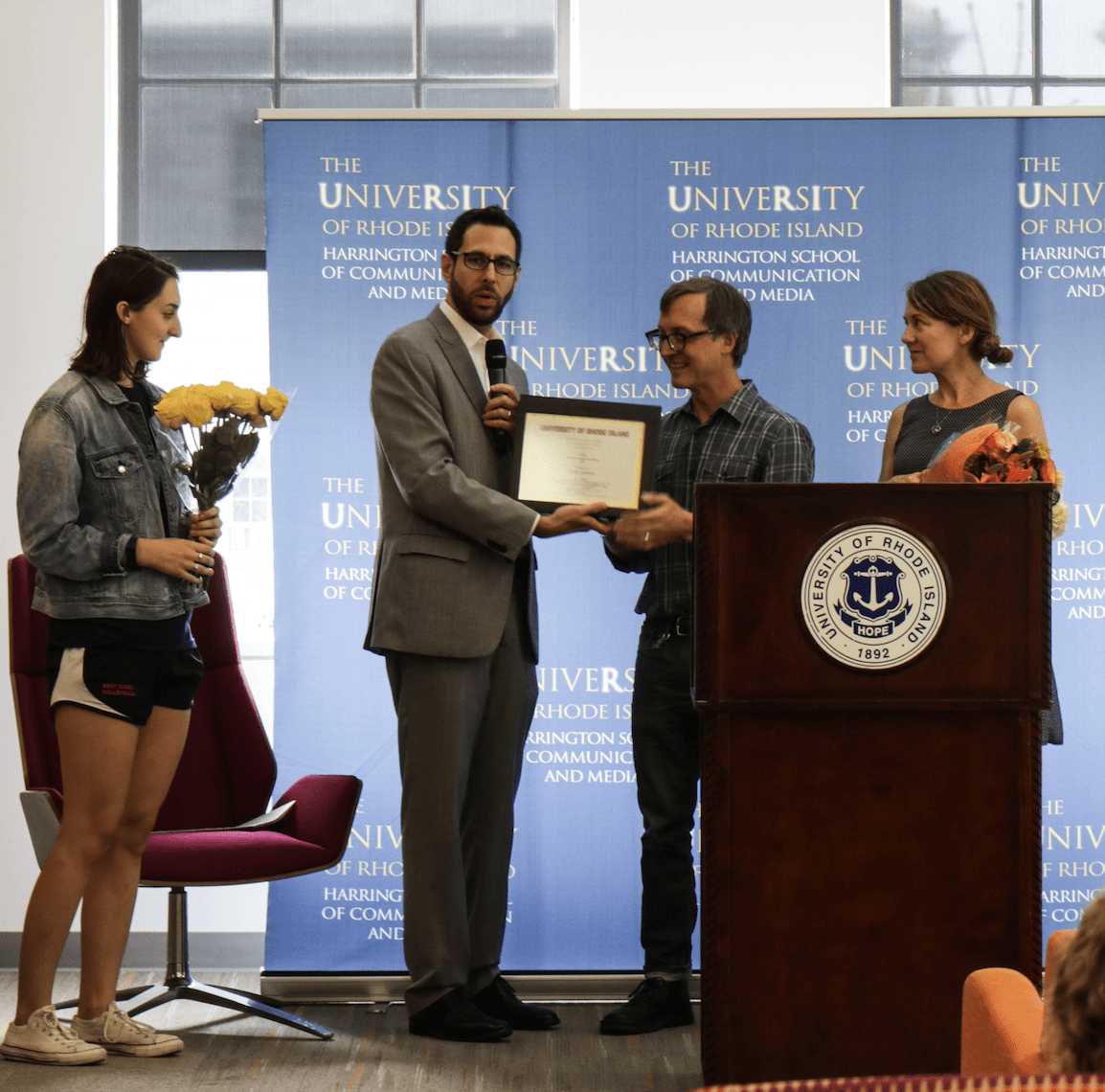 Photo by Kayla Michaud | Carpenter and Carlson were awarded plaques in recognition of their artistic excellence.

The Harrington School of Communications and Media held a reception last Friday for Ranger Hall’s recent art exhibit “FREEZE.” This exhibit was completed on the walls of the Ranger Hall living room last spring by artists Erica Carpenter and Eric Carlson.

“FREEZE” features a collection of 125 student journalistic publications over course of the University of Rhode Island’s 125-year history. These 125 phrases were pulled from 400 questions. “Who was frantically scribbling?” was one of the phrases that was pulled early on.

“The ones that had the most potential for different interpretations and also seemed to have some kind of way of being related to each other are the ones I kept,” Carpenter said. “The other limiter was that they had to fit on the wall.”

Carpenter and Carlson were aware of what size the text was going to be to begin with. Carlson then laid out the number of characters they needed to fill the space.

“[We chose] phrases that seemed to sing. Put other phrases around them to see what stuck. Then had to make it fit so that 125 phrases would fit in the room and so the enjambment, which is where the lines break, would interesting and keep the shape Erik wanted,” Carpenter said.

The artwork travels around half of the living room walls in Ranger Hall. It can be read starting from any point, but Carlson recommends starting to view the art from the top left corner. Although each wall can be read on its own as well.

“The biggest factor was realizing that behind any successful piece of art is an idea and that idea can be translated into a number of different media and we intended to translate that into interactive technology,” Carlson said. “Recognizing that we can achieve that sort of interactivity allowing the viewer to find these different ways of experiencing it without having it be a video screen that change or lights that change.”

Knowing that text can have multiple readings channeled their desire to have their art give the viewer many options of interrupting the art’s messages. Both of the artists wish for students to take a few extra seconds when passing by to see what phrases they can pick up and the understandings they can interpret from them.

At the reception, Carpenter and Carlson were presented the University of Rhode Island Harrington School of Communications and Media award of artistic excellence by Director of the Harrington School Adam Roth. This was in honor of their addition to Ranger Hall and a thank you from the faculty and students of the HSCM.