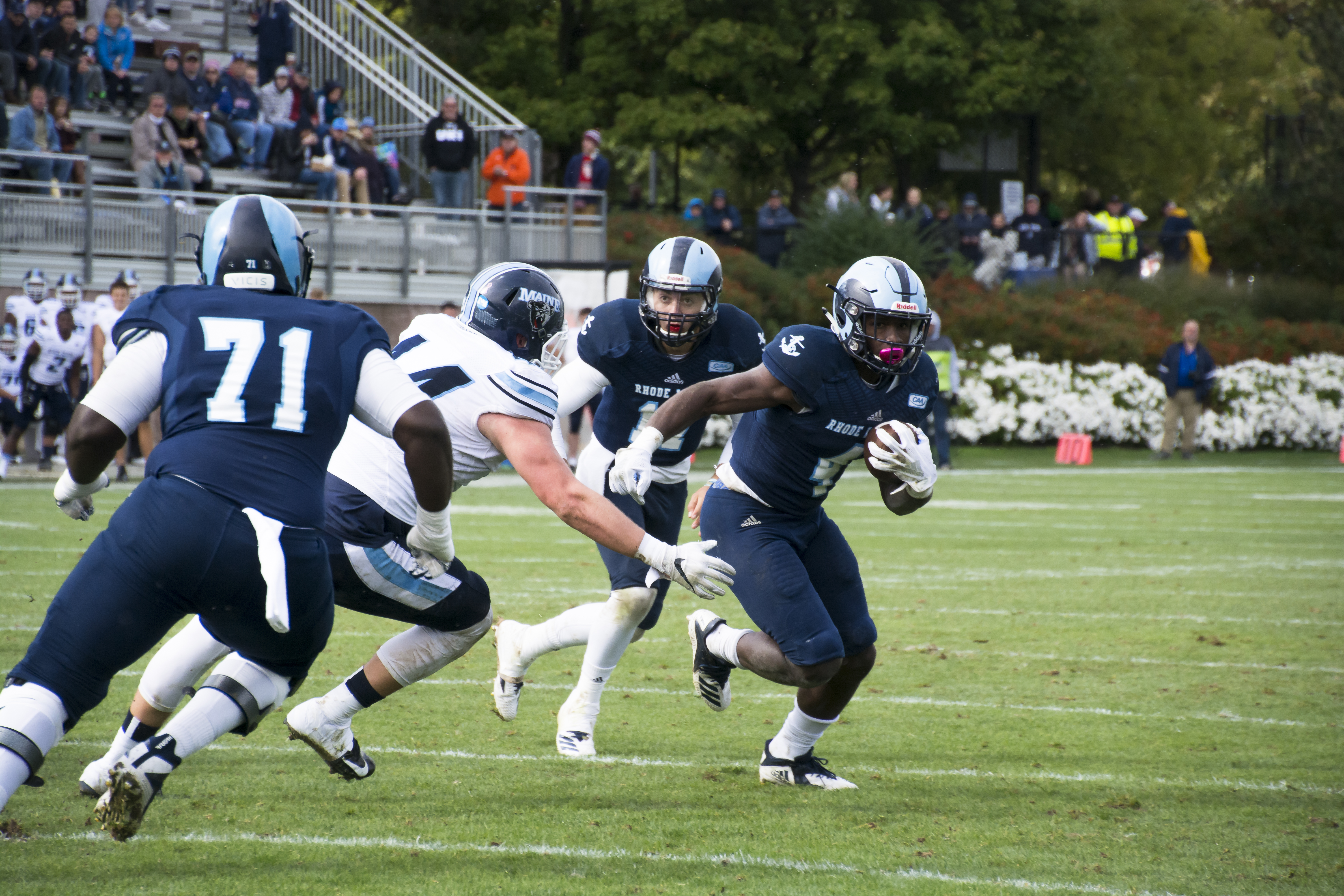 Photo by Autumn Walter | The Rams lost by two points at the sold out game for Alumni and Family Weekend despite a constant fight.

In front of a sellout crowd of 7,301 on Homecoming weekend, Rhody Football’s amazing fourth quarter effort was ruined by a last-second field goal by the University of Maine.

Just a few plays after Rhode Island drove all the way down field and scored with less than one minute remaining, Maine’s Kenny Doak nailed a 38-yard field goal attempt as time expired, putting the Rams down 38-36.

“I just want to win it for the guys,” Doak said. “It’s not over until the whistle blows. I knew I was going to get the opportunity. I just wanted to put that through for everybody.”

“It was a very difficult loss,” URI’s Head Coach Jim Fleming said. “Two good football teams battled their tails off. We were able to bring it back and get ourselves in position to win it. It kind of breaks your heart. It’ll be a test of character to come back up and get back to work tomorrow.”

The Rams’ first offensive drive was far from what Fleming had planned. A screen pass from Vito Priore, who was playing for an injured JaJuan Lawson, went off the hands of Matt Pires. Controversially, the officials ruled the attempt a backwards pass, resulting in a fumble that the Black Bears recovered and returned 66 yards for a touchdown.

Rhode Island bounced back, however, and C.J. Carrick connected for a 32-yard field goal on the following drive. The Rams would eventually score two unanswered touchdowns, putting them ahead 16-7. Priore connected with Aaron Parker for a 52-yard touchdown down the sideline late in the first quarter on a vertical route. Priore found Parker nine times on the day for 124 yards and two touchdowns. It was Parker’s fourth 100-yard receiving game on the season, and his second with Priore.

“Coach always says, ‘next man up,’” Parker said. “It’s not just me out there, I get all the glory. It takes eleven men to make the play work. And when I don’t have the ball, I’m out there blocking for my brothers.”

Ahmere Dorsey, who also had 132 return yards on the day, ran URI’s second touchdown in from four yards out. Dorsey finished with 41 yards on the ground, totaling 173 total yards on the day. With just over five minutes to go in the second quarter, Maine’s Joe Fitzpatrick punched it in from the one yard line for a touchdown, and the extra point made it 16-14 heading into halftime.

Again, the Rams scored two unanswered touchdowns, and eventually led 30-16 in the third quarter. Zoe Bryant Jr. scored two rushing touchdowns from the red zone in consecutive drives to push Rhode Island’s lead to two scores immediately after the start of the second half.

Despite the score, a packed stadium and the momentum that Rhode Island carried, Maine didn’t quit. Chris Ferguson found Devin Young for a 10-yard touchdown, then Micah Wright for the two-point conversion. Wright had 125 receiving yards on the day with a touchdown.

Early in the fourth, Ferguson connected with Wright for a six-yard score, which brought Maine within two points after the failed conversion attempt. With just over two minutes to play, Ferguson ran it in himself from nine yards out to put the Black Bears ahead 35-30.

That’s when the Rams showed their heart. With Priore at the helm, they ran the two-minute drill and marched 75 yards down the field for the score. Maine helped with two roughing the passer penalties that extended Rhode Island’s drive, but nonetheless, Priore found Parker on a goal-line fade with 51 seconds left to play. Fleming elected to try for the two-point conversion to extend the lead to three, if had they converted, a field goal would only tie the score, and not win the game.

The Rams attempted another goal-line fade, however, this time Priore’s pass fell incomplete. With just under a minute remaining, Maine marched down to Rhode Island’s 21-yard line and set up for the game winning field goal. As time expired, Kenny Doak’s 38-yard field goal attempt split the uprights, and Maine charged off of Meade Stadium with an impressive road victory.

“These kids showed you how bad they wanted to win today,” Coach Joe Harasymiak said. “That is a really good football team. But at the same time, I’m proud to be Maine’s head coach today.” At 32, Harasymiak is the youngest Division 1 Head Coach in the NCAA.

“What are we going to do?” Fleming asked. “We’re going to go play the next game. We’ve grown as a football program. We’re going to get up and fight like we have done in the past- that has been our habit. These guys have grown. We’ll get back up and we’ll get on the ferry and we’ll play Stony Brook next Saturday after a good week of practice.”