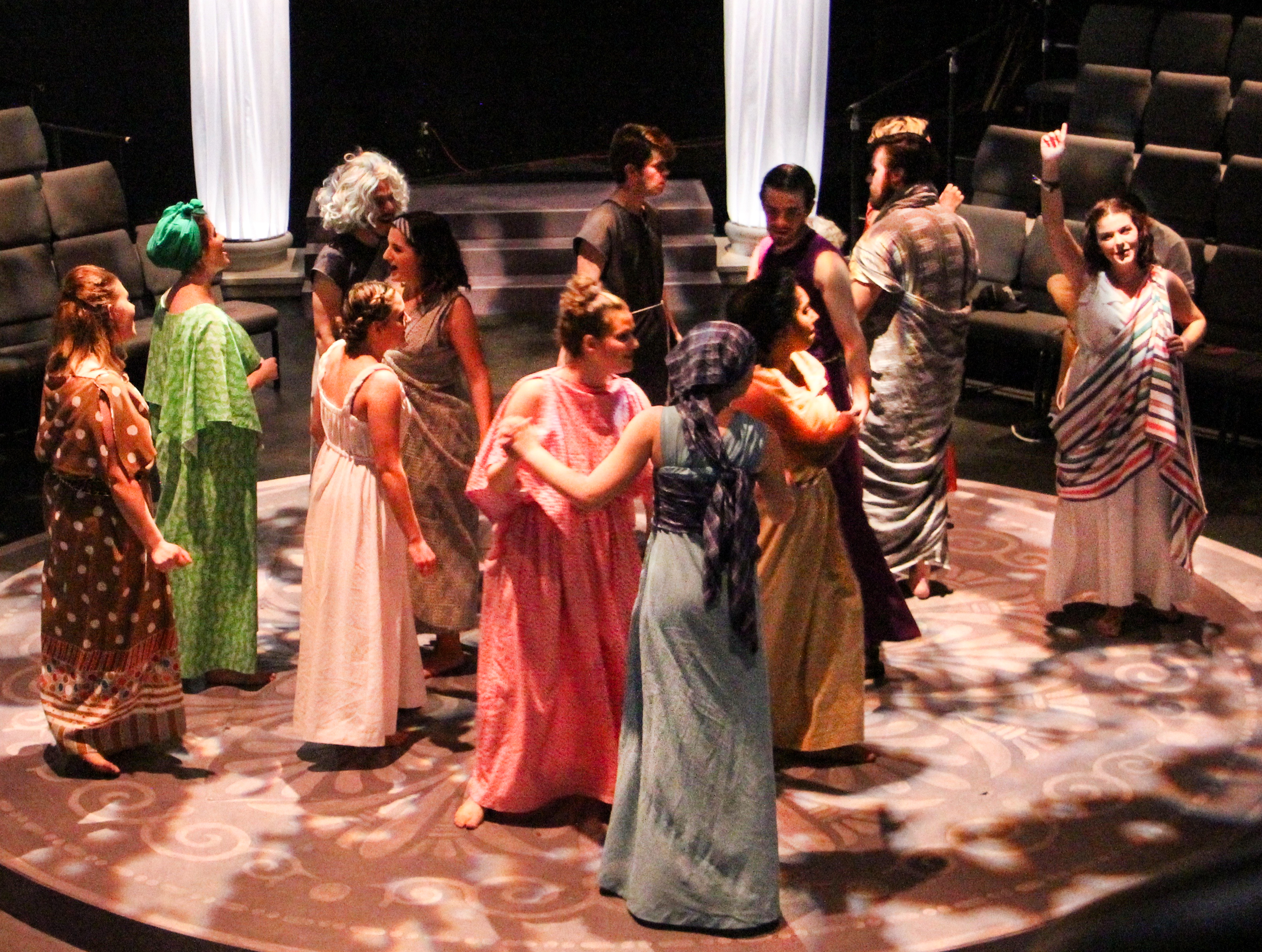 Photo by Greg Clark | “Women and War” was performed in the round to allow a deeper connection to the audience, creating an emotional rollercoaster.

Going from having an audience uncontrollably laughing to having tears roll down their cheeks within one show is a difficult challenge. However, it is one that the University of Rhode Island’s theater department’s performance of “Women and War” overcame last Friday night.

“Women and War” is comprised of two greek plays, “Lysistrata,” a comedy and “Trojan Women,” a tragedy. While the plays project contrasting moods on the audience, they were tied together by a beautiful intermission. In traditional performances the lights come on and audience members get up to stretch their legs in between acts. However, during this show’s intermission the set and costume changes are done in front of the audience in a natural artistic way that captures the audience members who choose to stay in their seats.
The plays were performed “in the round” which really played to the show’s strengths. Having the audience seated on all sides of the stage allowed the actor’s to form a stronger connection with their audience and tell their story in a different way than a traditional theater setup would.

Not all plays can be performed well in a non-traditional setting, but for “Women and War” there was something powerful about being only feet away from the performers. If it was performed in a traditional theater setup, I don’t think the show would’ve received the same emotional responses.

Both plays sent the audience on an emotional eye opening rollercoaster and in order to do so the actors had to be fully committed to their roles and the performance. Each actor didn’t hold back the emotions their characters were feeling with and transitioned from a comedy to a tragedy smoothly. While actors in “Lysistrata” had J Studio full of laughter over jokes about a serious issue, the same actors in “Trojan Women” brought the audience feeling the heartbreaking pain the characters were feeling all within one show.

On the tech side of things, the set was well designed. There was a large round lavender platform in the middle of J Studio and columns hanging in four corners of the performance space. For “Trojan Women” two doors were pulled up from the platform, revealing a sandbox in the middle that served as an essential set piece and prop. The lighting design also suited the performance well as it continuously matched the mood of show.

“Lysistrata” and “Trojan Women” have meaningful dialogue that recognizes the difficulties women endure when there is a war going on. Beautiful vocals work hand in hand with the dialogue to unravel the truth of how women are feeling while war occurs.

“Lysistrata” is humorous in the way how women rebel against their husbands, saying no to having sex with them until they end the war. By rebelling, the women are standing up for themselves and pointing out that the war is not bringing anything good home. “Trojan Women” reveals the truth of the price women when their city falls.

“Women and War” will also be performed on Oct. 18 to 21. Tickets are available for purchase on the URI’s theater department’s website and at the door before performances.

Looking ahead to spring screening series