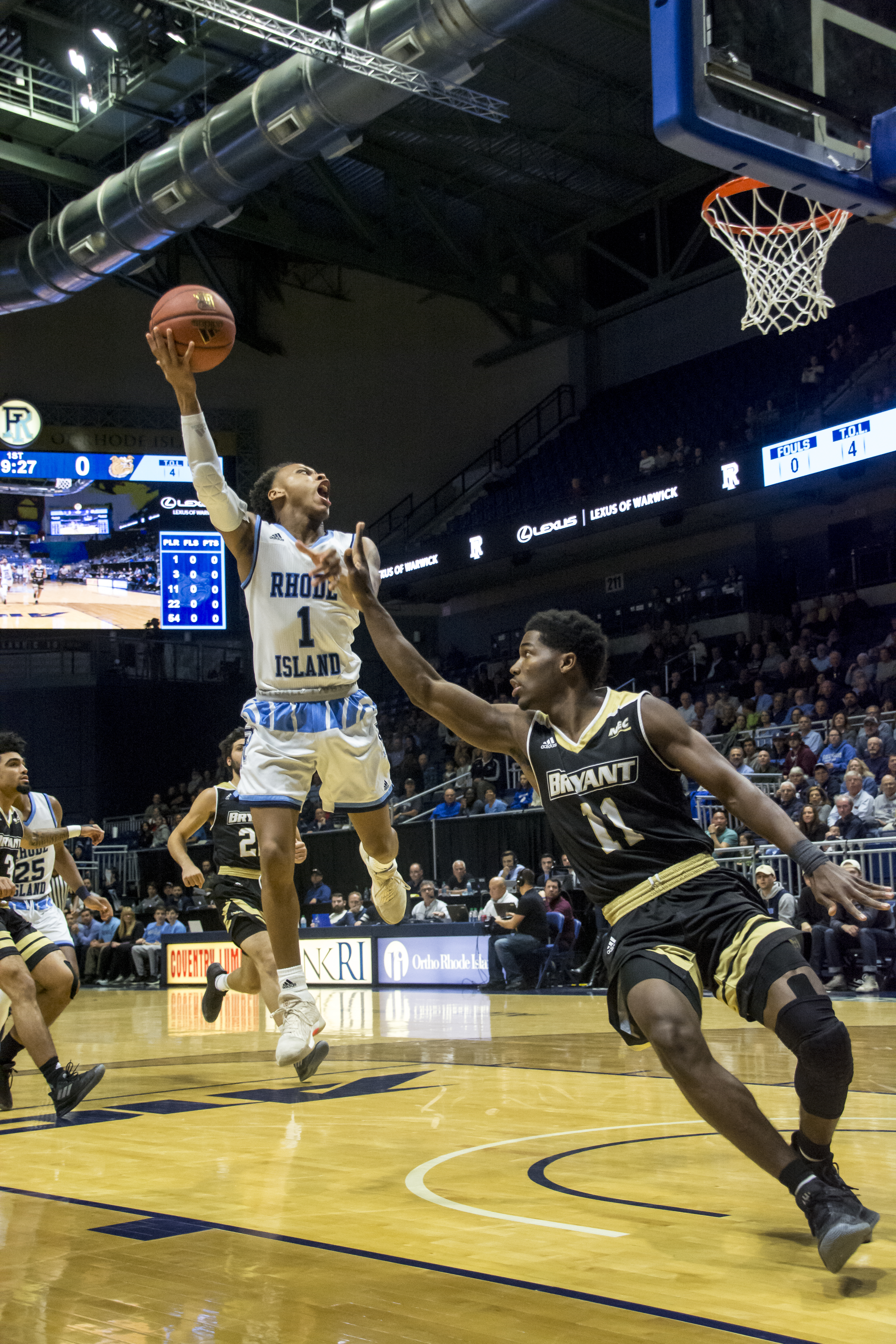 Photo by Autumn Walter | Fatts Russell attempts to score a two-pointer for the Rams.

It was a picture-perfect night.

In David Cox’s head coaching debut at the University of Rhode Island, the Rams raised their banners and then their arms in victory, storming past the Bryant Bulldogs 97-63. Even James Vanner, the Ryan Center’s beloved hype-man, surprised fans by coming out of retirement to join Rhode Island for their 2018-19 season.

The Rams took no time getting the ball rolling after the pregame ceremony, jumping out to an 11-0 lead within the first few minutes. After missing a majority of the last two seasons to injury, Christion Thompson started things off for Rhody with a three-pointer off of Jeff Dowtin’s steal. Fatts Russell stole the ball on the next Bryant possession and went coast-to-coast for a lay-up through a foul. Dowtin then joined in on the fun, with a mid-range jumper followed by a three from Russell, forcing a Bulldogs timeout.

“I thought that we were ready tonight,” Cox said after the game. “They set the tone early, and they came a long way from that exhibition game.”

Eventually, Russell and Dowtin were just too much for Bryant Head Coach Jared Grasso to handle. Grasso, who spent the last eight years as an assistant coach at Iona University, wasn’t as fortunate as Cox was in his debut. Rhody’s two guards spoiled that night for him, combining for 38 points en route to the blowout victory. Russell led all scorers with a career-high 21, and Dowtin added 17 points with nine assists and seven boards, as well.

“It’s our team now,” Russell said of his and Dowtin’s transition. “We look over our shoulder-no more E.C., JT. It’s just a great feeling to know that we’re stepping into this big role right now.”

Thompson added 14 points in his first game back after nearly two seasons. He made four three-pointers on the night, adding to Rhode Island’s impressive game from behind the arc.

The Rams shot 13-27 from three, contributing to over a third of their total score. The offense was clicking for Cox in his first game-especially in the second half, where Rhody shot 54.1 percent from the field. With just over four minutes to play, before the starters were given some rest, the Rams led by as much as 38 points.

“I like the flow of our team offensively,” Cox said. “We’re playing with pace, we’re sharing the ball, I think we’re going to be really good on the offensive end. We just need to make sure our defensive effort and our defensive fundamentals remain solid and continue to grow.”

Ryan Preston added nine points and a few thunderous dunks, while the five freshmen combined for 23 points in their first ever minutes in an NCAA game. Tyrese Martin led the young group with seven, while Dana Tate and Omar Silverio each put up six points and Jermaine Harris had four from the free-throw line.

With the season now in full swing, Coach Cox is relieved to have his first victory in Kingston off the board quickly, as the Rams now prepare to travel to Charleston next Tuesday and host Harvard next Friday at the Ryan Center.

“It felt good, but I’ve been coaching for over twenty years,” Cox said. “I prepared myself for this moment. I’m just looking forward to continuing to grow with this group of guys.”