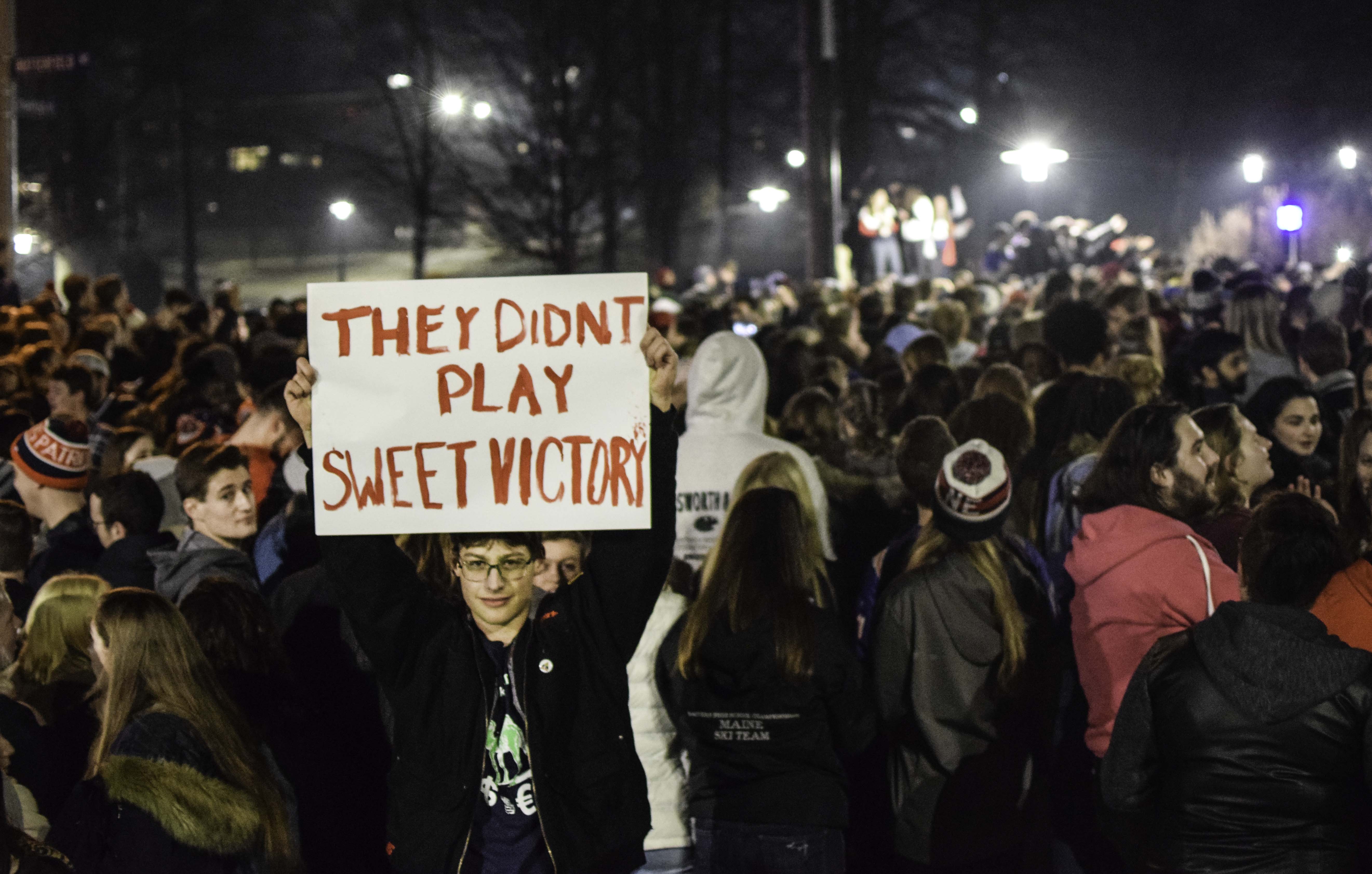 Joseph Lachance | A student expresses his disappointment in the Super Bowl half-time show while others riot around him after the Patriots win Sunday Night.

by Mary Lind and Isaac Marshall

The University of Rhode Island Kingston Campus erupted in riots following the New England Patriots 13-3 Super Bowl win over the Los Angeles Rams, resulting in the arrests of three students.

Police estimate that 2,000 students took to the streets following the conclusion of the game.

Multiple dumpsters were set on fire during the riots. The first fire occurred in the Roger Williams Complex, behind Aldrich and Burnside Hall. Another was set behind Weldin at 10:56 p.m., and a third behind Hillside in Fraternity Circle soon after. A fourth was set in the dumpster enclosure behind the Memorial Union.

The Aldrich and Burnside fire was the biggest of the fires. Two dumpsters piled high with burning plastic trash cans were ablaze as hundreds of students looked on. It took about five to seven minutes for the fire department to arrive and put out the fire.

“These were dumpster fires, it was not critical that they were put out immediately,” Stephen Baker, the chief of police and director of public safety said. “Additionally, the fire department was instructed to proceed with caution, there were a lot of students in the road, we couldn’t come barrelling down the road, unless it was a life or death scenario.”

The fire behind Hillside was a single dumpster fire, but rapidly grew as rioters began to feed it. According to several students, a rioter was arrested at the scene, as some members of the crowd watched the suspect being taken into custody.

The Memorial Union fire came next, as a large crowd gathered around and watched two rioters light a fourth dumpster on fire, and almost suffocated it with the plastic trash cans they threw in. As one was trying to relight it using a full notebook, he was tackled by the police, according to several students, and the crowd fled.

Following the fire behind the Memorial Union, some students attempted to go to the Quad. However, students reported that several campus police officers approached the group and told them “to go home or they’ll be sprayed.”

Baker confirmed officers told students pepper spray could potentially be used against them.

“At a certain point it became clear that things had gotten out of hand,” Baker said. “We felt the only way to keep everyone safe was to disperse and get everyone inside. The officers were authorized to use pepper spray if [they] know the students wouldn’t cooperate.”

Dave Lavallee, the assistant director of communications and marketing, said no students were pepper sprayed.

Aside from the fires, other incidents of unruliness unfolded as well. Before the fires started and throughout the rest of the night trash cans, stop signs and street lamps were knocked over.

A section of the fence around Meade Stadium was knocked over as students rushed the field. Several students jumped off the roof of a shed and into a crowd of people next to Butterfield Dining Hall. The spirit of unbridled celebration blinded a few to the cold, as they jumped into Ellery Pond.

“[There were] several thousand dollars of damage [in total], and we don’t know how much more until someone really looks at that car,” Baker said.

Lavallee noted the price to repair the car could be rather expensive, as seemingly minor car repairs can oftentimes cost a large amount.

The riots began as little more than a hundred or so people crowding into Barlow Circle. They first chanting “Brady! Brady!” They then chanted “Fuck PC!” in reference to longtime URI rival Providence College.

Baker said the riots were not too much of an issue when students were simply running around campus and chanting.

“It wasn’t until that first fire that [the police] started to be concerned,” he said.

Following the threats of pepper spray, the riots finished as quickly as they started. The chanting ceased. After nearly two hours, students who had moments ago cheered as they witnessed rampant property damage and vandalism quietly trickled back into their residence halls.