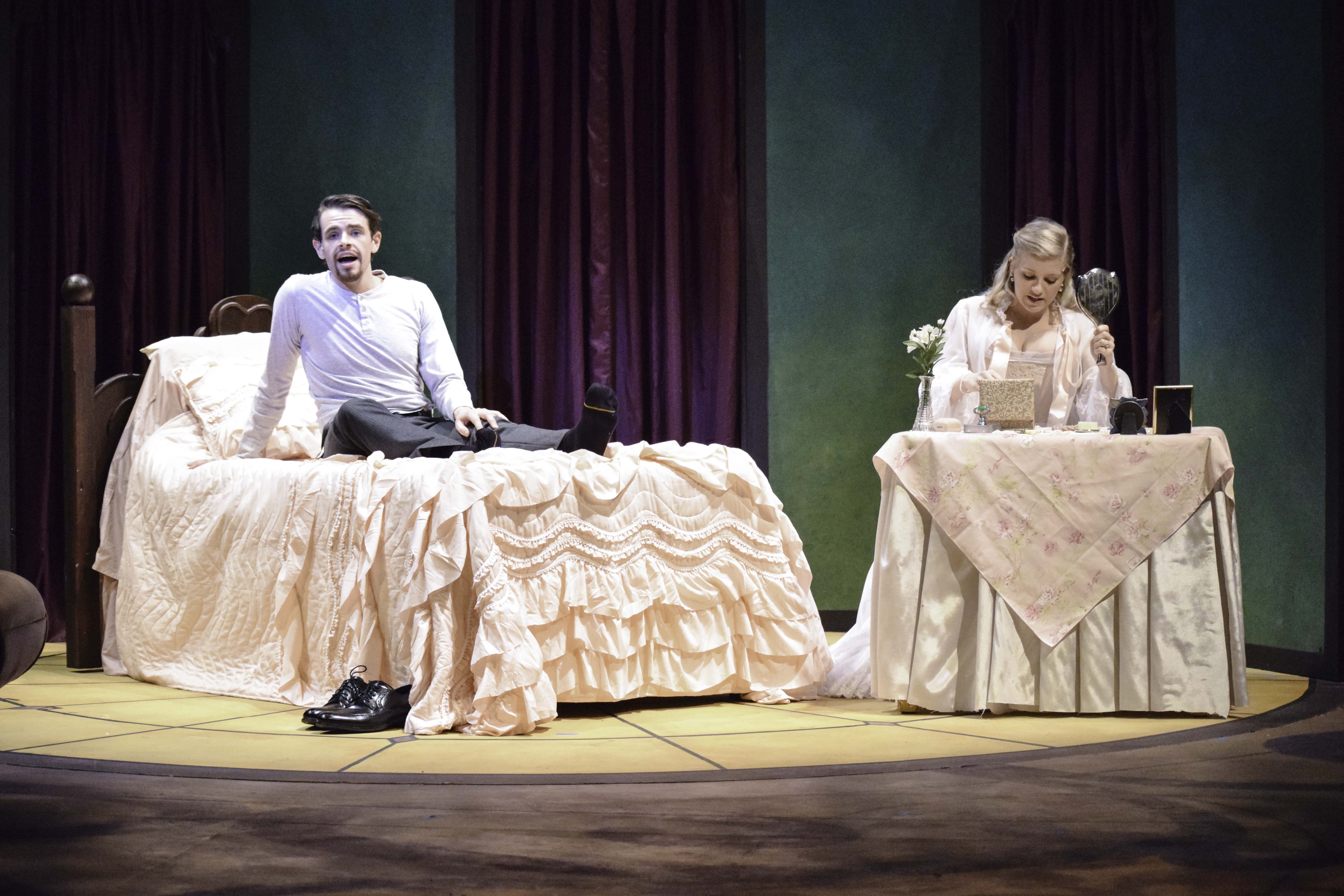 “Too many people muddle sex with mere desire,” Maria Day, a Theater 100 instructor, who plays Madame Armfeldt, sings in “Liaisons,” summing up the problem many characters, including her own daughter, Desiree, are facing at the turn of the 20th century in Sweden.

“It’s but a pleasurable means to a measurable end. Why does no one comprehend? Let us hope this lunacy’s just a trend,” Day said.

Like many classic romantic musicals, “A Little Night Music” is not lacking in drama and it all begins with a mumbled name of an old lover during a mid-afternoon nap.

The seven principal characters are tied together in a complex web culminating with them spending “A Weekend in the Country.” Only one of principal characters is not played a senior. Petra, the flirtatious, sarcastic maid of the Egerman family, is played by sophomore Lauren Jannetti.

In her solo song, “The Miller’s Son,” Jannetti showed her range and ability by constantly having to switch between slow and seductive signing to the fast-paced, quick singing and belting required by others.

The senior principals were all given the chance to shine in their own solos, starting with the songs, “Now, “Soon” and “Later” which establish the characters of Fredrik, Henrik and Anne Egerman with all of their differences.

Fredrik, played by senior J. Edward Clarke, is a successful lawyer who was widowed but has since remarried. “Now” sets Fredrik up as egotistical and impatient, particularly with his young new wife Anne, who is still a virgin after 11 months of marriage.

“Now” is followed by “Later” in which Fredrik’s son, Henrik, played by senior Brooks A. Shatraw, shows that he is almost the complete opposite of his father. The younger Egerman man is studying to be a Lutheran priest and is depicted as very serious, yet frustrated and confused. In “Later,” he sings of his frustrations with always being told “later, Henrik,” especially when his father only ever hears “now.”
In portraying Henrik’s frustration, Shatraw travels higher in his range, stunningly hitting the higher, more operatic notes required of the song. Henrik’s character really shines through in the final line of the song, as he asks, “doesn’t anything begin?”

Lastly, there is “Soon,” in which Anne, played by senior Emily Turtle, stuns audiences as she promises her husband that it will not be long before she makes love to him. She is shown to be naive and hopeful, very unlike Henrik, despite their closeness in age.

The song ends with an beautiful overlap of the three characters singing their own parts, displaying beautiful harmony as well as a direct comparison between the styles and characteristics of the Egermans.

The other marriage that is featured in the show is between countess Charlotte and Count Carl-Magnus Malcolm, played by seniors Emily MacLean and Daniel F. Greene respectively. Years into their marriage, the countess is bitter and unhappy while the count is happily, openly and boldly unfaithful.

MacLean’s duet with Turtle, “Everyday a Little Death” sums up the countess’s feelings on marriage and love with the line, “love’s disgusting, love’s insane, a humiliating business.”

This song follows Greene’s solo song, “In Praise of Women,” in which he sings that fidelity is what a man expects from life, so that is what he expects from his lover and his wife, despite the fact that just having a lover and a wife means he is practicing infidelity.

The connections between these principal characters all seem to lead back to Desiree Armfeldt, an egotistical actress who is touring the countryside, but used to enjoy much greater fame. Senior Emily Carter beautifully shows the more vulnerable side of Desiree in what is perhaps the song the musical is most known for, “Send in the Clowns.”

The title refers to the fact that in that time, when a circus performer fell, clowns would be sent in to distract the audience while the performer is carried off. Desiree is trying to use the joke about the clowns to distract from the fact that she is showing great vulnerability for the first time in the show, but it connects to a greater theme of the show.

At the beginning of the show, Madame Armfeldt tells her granddaughter that the summer night “smiles” three times: once for the young, then for the fools and lastly for the old.

In “Finale,” Desiree reprises part of “Send in the Clowns” with Fredrik, finishing with the line, “applause for the clowns, they’re finally here.”

After this final line has been sung and the lights have been turned back on in J Studio, the night has smiled three times, the audience has laughed and maybe even cried, and there is great applause. Performances of “A Little Night Music” continue in J Studio from April 25 to 27 at 7:30 p.m., with a final matinee performance on Sunday, April 28 at 2:30 p.m. Tickets can be purchased at the door or on the theater department’s website.

All photos by Anna Meassick.