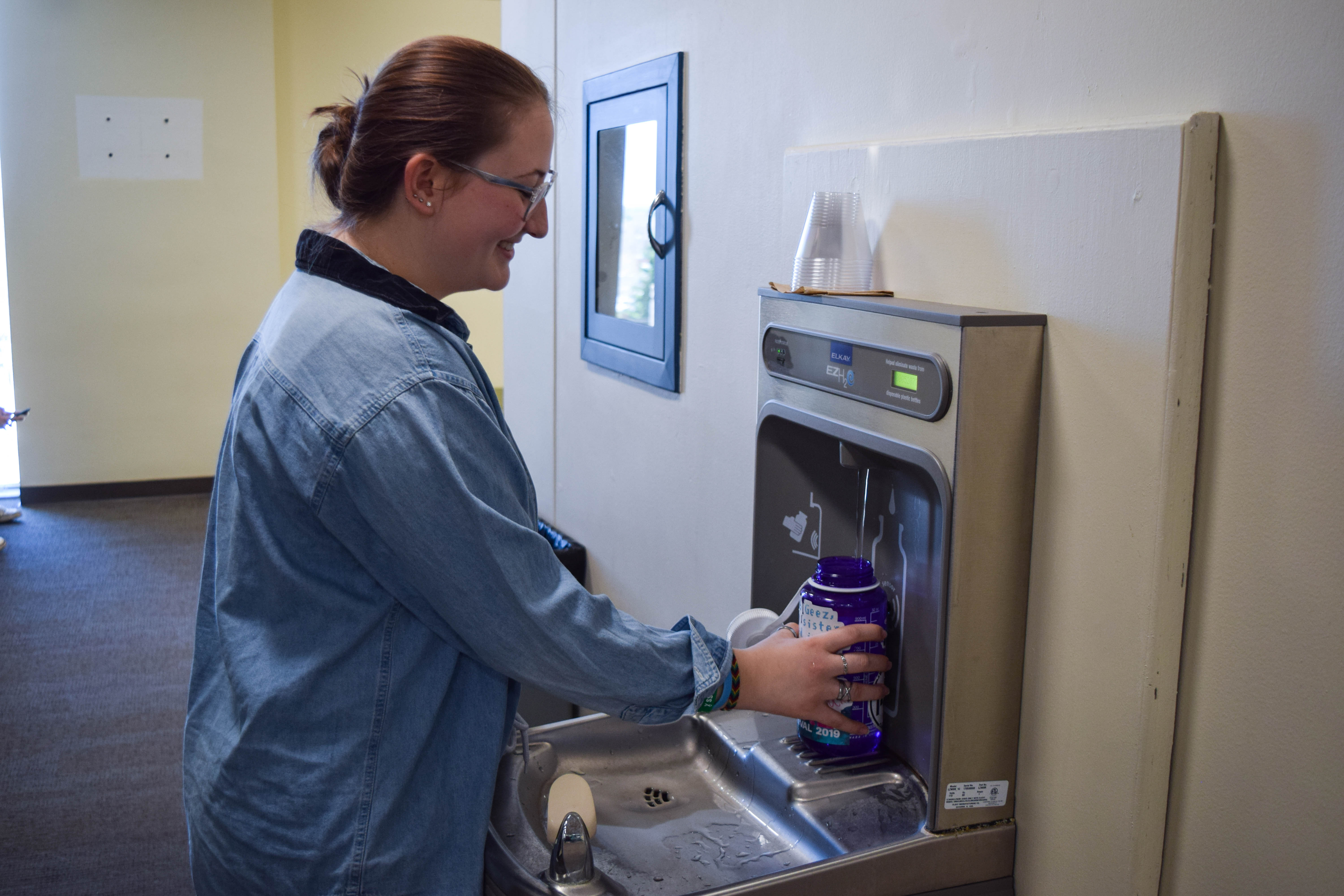 Annabel Cimbal uses the water bottle filling station in the library, one of the few buildings which the stations available. | Photo by Anna .

Some students have recently expressed concern that the only residence hall with a water bottle filling station is Hillside Hall, and are pushing to get more stations installed in all complex dormitories.

“Me and my roomates have been talking about this for awhile,” said Aldrich Hall resident Duncan Hamilton. “Sometimes the water gets brown from the sinks and stuff. So when we go to fill up water to have throughout the day, you can’t always get it if it’s brown. You don’t want to be drinking brown water all day.”

Bryan explained that the lack of water bottle filling stations results in buying plastic water bottles, which can be expensive.

“[Water bottle filling stations] save students a lot of money because [the University of Rhode Island] is a well-watered school,” Bryan said. “We get most of our water from the well, it’s nearly free because of that. It doesn’t cost money we don’t have to pay for water on campus. So if we are able to just give that in a filtered way to students, and they don’t have to pay for their water bottles, that would save them a lot of money.”

According to Bryan and Connelly, URI spends a considerable amount on recycling plastic water bottles. An eight yard recycling container cost $176 and fills about 54 thirty-gallon trash cans. Connelly’s estimations report that about 13,000 water bottles could fill that container.

Connelly and Bryan also believe that if URI were to implement these water bottle filling stations, they could benefit from advertising it.

“Another benefit we were thinking of, which is hard to quantify, but the advertising benefit,” said Bryan. “If URI was able to say ‘oh we were able to save 3 million water bottles because of this implementation,’ that is something they could put on their website and they could tell to potential students as they are doing URI tours. They could let them know that all the dormitories have water bottle filling stations and I think that would be neat thing.”

According to Dr. Jeffrey Plouffe, the assistant director of Housing and Residential Life, installing water bottle filling stations in residence halls is part of a five year construction progress plan. The stations are expected to be installed in the summer of 2022.

According to Plouffe, the project will cost roughly $50,000 and will be funded by the fund balance, which is money that the state requires the University sets aside for maintenance and asset protection. The University has about $350 million in assets and has to reinvest in those every year.

Plouffe has expressed interest in obtaining student involvement for the planning and execution of the project.

“I was hoping I could [get] a civil engineering student, or a group of students, or a class that would be willing to take this on and come up with a design,” said Plouffe. “For instance, how would we come up with a sanitary line into Aldridge which is built on a slab? How would we get one in Dorr? Where would we locate these? So I was hoping to get some student involvement because we could use the help and for a civil engineering student it would be a dynamite project.”