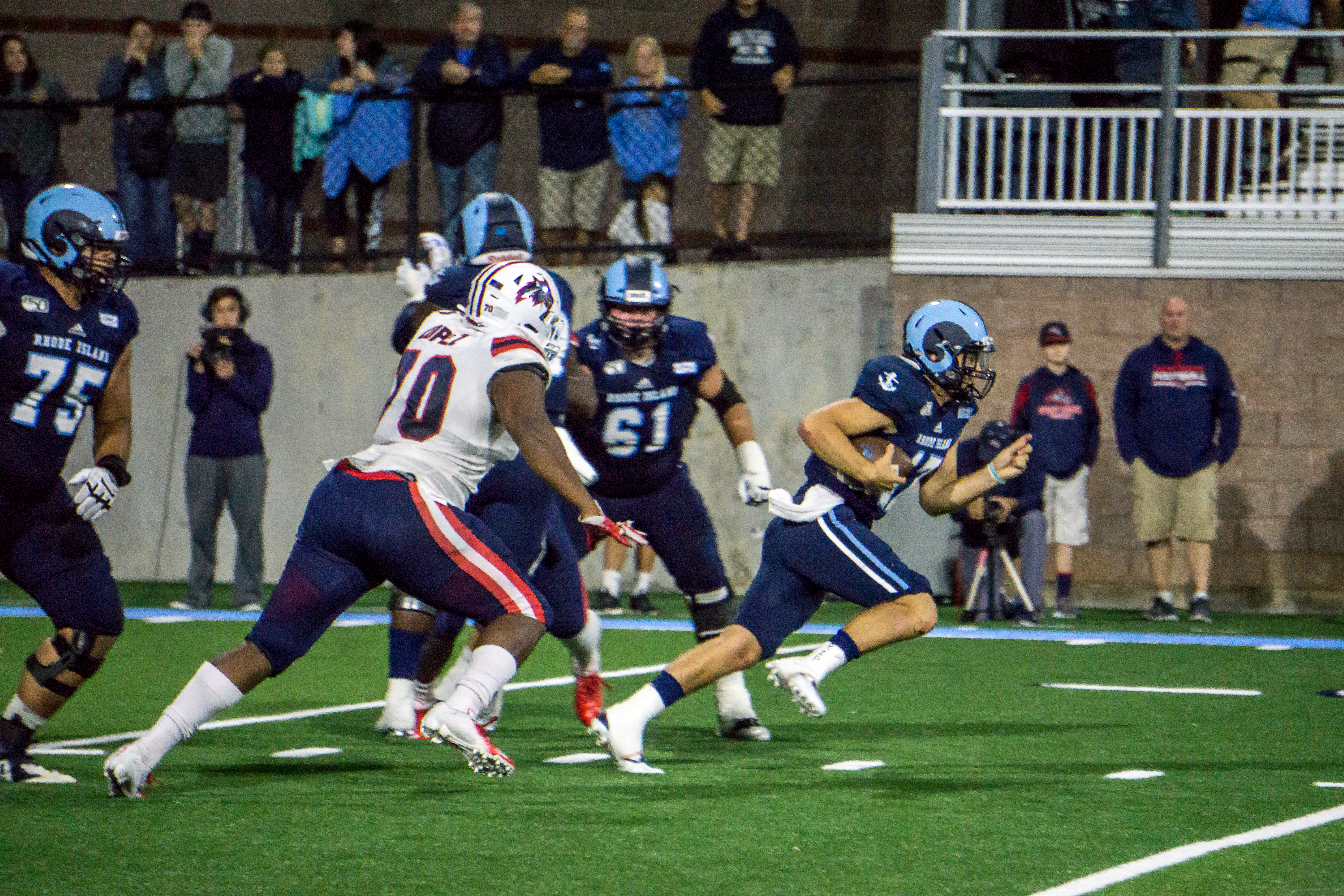 Although they made some powerful plays, the football team took another loss against Stony Brook University. Photo by Autumn Walter.

That was the sentiment Head Coach Jim Fleming opened up his post game press conference with after Rhode Island football once again was stunned in the final seconds. Meade Stadium quickly went from madhouse to morgue this past Saturday night, after what would have been a comeback for the ages turned into the toughest loss of the season.

Enter Ahmere Dorsey. Rhody’s electric return man housed the ensuing kickoff, going 99 yards for the score to rejuvenate a lifeless University of Rhode Island crowd. A field goal for the Seawolves made it 24-14 and with the Rams down two possessions with just over six minutes left, having to drive the length of a field against a defense that had stymied them all day, things looked bleak.

However, quarterback Vito Priore continued to shine for Rhode Island as he led a 92-yard touchdown drive that was capped off by a 24 yard pass to Isaiah Coulter for six. The Rams were now within three points at 24-21 with 1:41 remaining in the game. Rhody needed a successful onside kick to have any hope of forcing overtime or taking a lead. Special teams continued to impress, as kicker C.J. Carrick, with one sweep of the leg, pulled off a perfect onside kick which the Rams recovered. Now down three and on the Stony Brook 49-yard line, Rhody had a terrific chance to pull ahead.

With 1:05 remaining on the clock, Priore once again connected for six, this time with Aaron Parker on a 29-yard throw and catch. A failed extra point by Carrick would give the Rams a 27-24 lead with just over a minute left for Stony Brook to make something happen.

“I have no idea how [Aaron] Parker got open on that final play,” said Fleming. “Those guys make plays. They do a good job of identifying what defenses are doing.”

Stony Brook’s final possession stalled, and they were faced with a fourth down at the 50 yard line, needing six yards to convert the first down and keep their hopes alive.

Stony Brook quarterback Tyquell Fields dropped back to pass, with the Rhode Island defense rushing four. A hole opened up for Fields, a dual threat QB, to run through, and he took advantage by picking up the first down and then some. A couple of cuts and some pure speed led to Fields crossing the goal line for a fifty yard touchdown run to put Stony Brook up 31-27, which would be the final score in the Rams fourth straight loss, and third straight conference loss.

So far on the year, URI has lost each of their three CAA games by one score or less. The Rams have been the unfortunate beneficiaries of some awful luck.

“We had three tough conference losses,” said Fleming. “All winnable football games. We gotta find a way to get it done.”

There’s no better time than the present for Rhody Football to find their way. With a matchup against Brown coming up this Saturday on the road, the Rams have a perfect opportunity to to retain the heralded Governor’s Cup Trophy. The Brown Bears are fresh off a 42-7 loss against the Harvard Crimson. In the Governor’s Cup matchup from last year, which was played at Meade Stadium, Rhody blanked Brown 48-0. The 2019 campaign for URI Football is something that can still be viewed as a positive, even with an 0-4 record to begin the season. Rhody has the talent to succeed as a CAA program, but it still remains to be seen whether they can finally break through for their first win of the season.