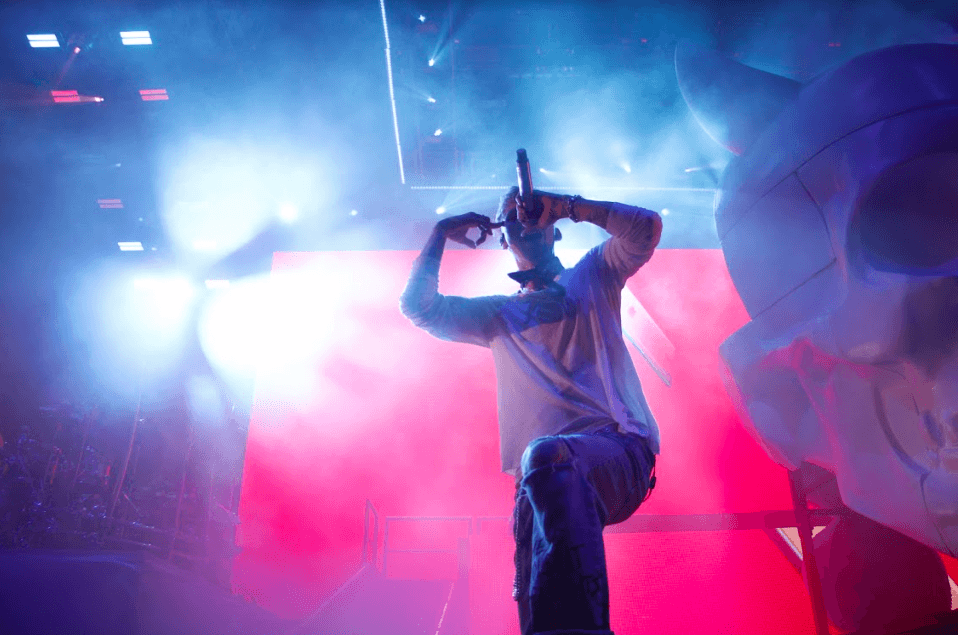 The Ryan Center hosted Young Thug and Machine Gun Kelly (above) for students and fans. Photo by Greg Clark.

This was the fourth performance of their combined tour named “Justin Bieber Big.” Many new and upcoming rap artists and DJs like RJMrLA, opened the show at 8 p.m.

Machine Gun Kelly made a dramatic entrance as he was standing on top of a giant rotating set in the shape of a skull with devil horns, keeping up with the theme of his new album “Hotel Diablo,” which was released earlier this year. He performed songs from the album such as “Hollywood Whore,” “I Think I’m Okay” and “El Diablo.” Apart from songs from this album, he also indulged the crowd by performing his other hit singles such as “Candy,” and “The Break Up.”

Many people were impressed with Machine Gun Kelly’s wide range of musical skills as he played the electric guitar, drums and rapped in his performance.

His performance was followed by Young Thug, who’s stage design was much more lively than those before him. He performed various songs from his new album “So Much Fun,” that was released this August. His songs like “Digits,” “About the money,” “The London,” “Check” and “Hot,” spurred much excitement among his fans as they sang along to every verse.

Many people seemed more excited for Young Thug’s performance than Machine Gun Kelly’s considering it was longer and went on till 11 p.m. Though the concert ended late, the crowd kept up their enthusiasm till the end.

“Its my second time seeing Young Thug,” Emma Vincent, a sophomore at URI, said. “He opened for J.Cole who is my favorite. It was great. It was a lot of fun. I feel guilty about it but I don’t know a lot of MGK songs. Young Thug is my guilty pleasure. It was a good time.”

The center was about a quarter full for the first half of the show but immediately gained momentum and was half full by the time Young Thug came on stage at around 10 p.m.

“It was a lot of fun and yeah, we came here for the Thugger,” Kemi Bankole, a fan of Young Thug, said. “We loved the songs ‘Best Friend,’ ‘’Relationships’ and ‘With them.’ We weren’t here for MGK.”

Overall, the show received a positive response from the audience and many enjoyed both the performances. However, some URI students felt like there wasn’t enough energy from their side.

“It was fun. I wish URI was a little more excited though,” Emma Thibodeau, a sophomore at URI, said. “This show was not better than J.Cole’s last year, but it was definitely a better Young Thug Show. I felt like he wasn’t feeling us. We weren’t doing that well. We could’ve been better as an audience.”