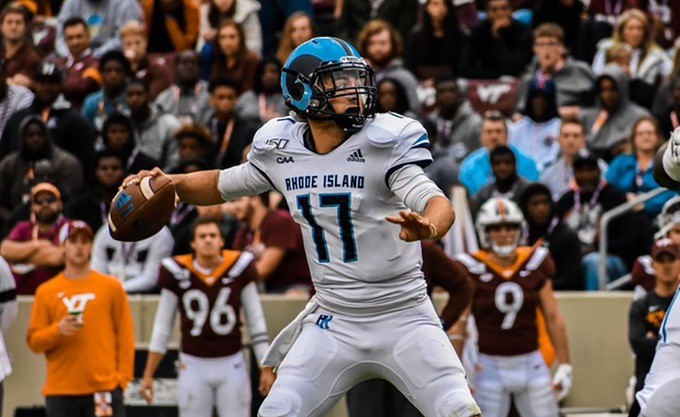 Moral victories. That’s the theme for Rhode Island Football after their fifth loss of the season and the second loss to come from an FBS opponent.

Anytime an FCS team plays up a division in a “buy game,” they’re going to be fighting an uphill battle. The Rams just happened to be fighting that battle not only against a more talented team, but 51,716 screaming fans. This was the biggest crowd ever to witness a University of Rhode Island football game and they got the prototype performance from the 2019 team. There was plenty of offense, exciting athletic plays, but an overall lack of execution necessary to come out on top.

Rhody found themselves down two scores after the first quarter, facing a 10-0 deficit. The Rams were able to break the goose egg in their scoring column with a C.J. Carrick field goal less than three minutes into the second quarter. Another Carrick field goal late in the first half had Rhody within 11, as the Hokies led 17-6 at the break.

URI opened the second half with an impressive scoring drive. The Rams drove 75 yards over eight plays on a drive that lasted two minutes and 34 seconds. Rhody capped the scoring drive with a nine-yard touchdown reception by Ahmere Dorsey from quarterback Vito Priore. A successful two point conversion pulled Rhode Island as close as they would get to the Hokies, with a score of 17-14. However, Virginia Tech did what they should as five Conference school, flexing their muscles as Goliath and pulling away from David. The Hokies would go on to outscore Rhody over the next 17 minutes and 34 seconds of game action by a score of 17-3, effectively ending the upset dreams URI had.

“I think it was a great experience for our guys,” said Rams Head Coach Jim Fleming. “I thought that we really battled, played extremely hard. We didn’t play well enough to win a game like that on the road but when you look at the positives, we drew it to seven points twice.”

Standout receivers Isaiah Coulter and Aaron Parker continued to impress on the season as well. Coulter finished the game with nine receptions for 152 yards, while Parker hauled in five catches for 64 yards.

“They can play,” said Fleming. “They can play with anybody. These guys both have NFL talent. Everyone knows that, everyone’s recognized that talent.”

As the Rams yet again lick their wounds after a loss, it is uncertain what comes next for the 1-5 team.

URI has as potent an offense as you could hope for, with dynamic threats in Dorsey, Coulter and Parker, and signal caller Priore orchestrating a passing attack that currently leads the Colonial Athletic Association (CAA) in passing yards per game with 333.8.

What’s been lacking for the Rams has been on the defensive side of the ball. Rhody allows the most opponents points per game in the CAA (34.2), the most rushing yards (231.5) and third most passing yards (257.2).

The defense so far on the year has not been world class, to say the least, but there are still bright spots for URI on that side of the ball. Senior defensive back Momodou Mbye leads the conference with four interceptions through the first six games. Senior linebacker Branyan Javier-Castillo leads the conference in tackles up to this point as well, as he has 63 total tackles on the season and averages 10.5 per game.

This Rams team is probably the best 1-5 team in the FCS this season. “Almost” usually only counts in horseshoes; it’s hard to not play the should have, could have, would have game.

That being said, this season is not lost yet. The Rams are a cornered animal at the moment. Back against the wall, sporting a 1-5 record, they are as dangerous a football team as you could face. There’s a level of desperation for wins surrounding the program that leads them to a very aggressive and unafraid brand of football that should still lead to excitement in Meade Stadium this season.