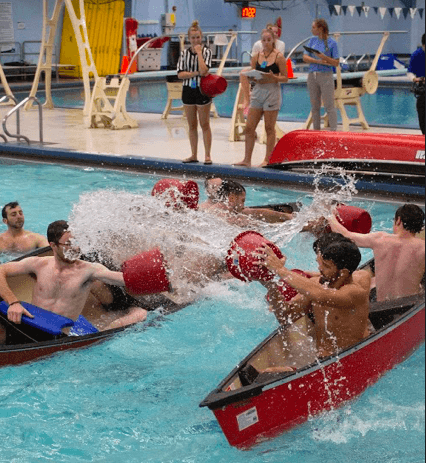 Students team up and attempt to sink other boats with buckets as a twist on the game Battleship. Photo by James McIntosh.

Watching from the spectator deck, one could see a shallow pool down below, in which students sat in canoes, throwing buckets of water at each other.

This is Battleship: the yearly intramural sport at the University of Rhode Island where teams of two or three gather at Tootell Aquatic Center, get in canoes in the shallowest pool and do their best to sink the other ships to be named champions.

This year’s competition was held on Wednesday, Oct. 9 from  9-11 p.m. and involved 18 teams, divided into three separate qualification heats in which six ships would compete at a time to move onto the semifinals, and eventually, finals.

Of the 18 teams, the aptly named, The Champs, were the ones to beat. Made up of three sophomores, they had won the year before and were looking to hold on to their title. A big challenge for them was their runner up from the year before, The Super Splash Bros.

Battleship is a pretty simple game with just a few rules, including that players may not use their buckets to remove water from their own ships and they must stay inside the boat at all times. To keep the competition fair and safe, lifeguards were present in and out of the pool. Team members each get a bucket and a paddle used to help people learn to swim. When the whistle blew, the round would begin and buckets would go flying.

For The Champs’s strategy, sophomore Tyler Manard said, “I’m trying to fire off as many buckets as possible. The BPM, the buckets per minute, I got that rate up there.”

The number of spectators was quite small for such a unique and fun event, with no more than 10-15 people on the spectator deck at any time, but it was clear that, despite the competition element, the event was set up for the participants to have as much fun as possible.

One of those spectators was sophomore Joseph Impagliazzo, a friend of The Champs, who had also attended the year before.

“It was very fun. I liked watching it,” he said. However, he said that while he’s considered competing, he decided against it because he didn’t want to have to take a shower afterwards.

Junior Stephen Hall, who transferred to URI this year, decided to compete with his friends under the team name, The Titanic, as a way to get involved in school activities. The team had just one goal, to sink and make it farther in the competition than The “Iceburg,” which they accomplished in the second heat, coming in first place. This qualified them for the second round of heats, in which they then qualified for semifinals and then made it to finals, placing third.

“I would’ve been happy with just winning one game,” Hall said. “Our strategy was to copy whoever was winning and it worked really well.” He added that they will “absolutely, 100 percent” compete next year.

Placing just behind them in the finals were The Neutch Divers, made up of a trio of freshmen. They said that the name was inspired by a gender neutral bathroom on their floor in their dorm, affectionately called the Neutch, which was fitting for their gender neutral ship.

“It was so much fun, I can’t wait for next year honestly,” freshman Robert Armas said. The team described their strategy as “yeet,” but Armas also said they formed alliances “so [they] wouldn’t get in trouble.”

While their alliances seemed to work, teams were penalized multiple times for removing water from their own ships by having more buckets added by the lifeguards. For the championship match, the top six teams were ranked in a point system based on their standings in previous rounds. The Champs, having qualified in first, received zero buckets of water added to their ship, but each team received buckets increasing in increments of two.

The Neutch Drivers, who had just qualified, placing in sixth, received 10 added buckets, just behind The Titanic, who received eight added buckets. Despite the adversity to begin with, both teams stayed in the game for quite some time before sinking, leaving a repeat final match up between The Super Splash Bros and The Champs.

The Champs managed to come out on top again, holding onto their title. Manard joked that next year, their title will have to be “The Two-Time Champs.”

It was a thrilling, exciting and fun night that ended with participants and lifeguards diving into the 14-foot deep pool in celebration.