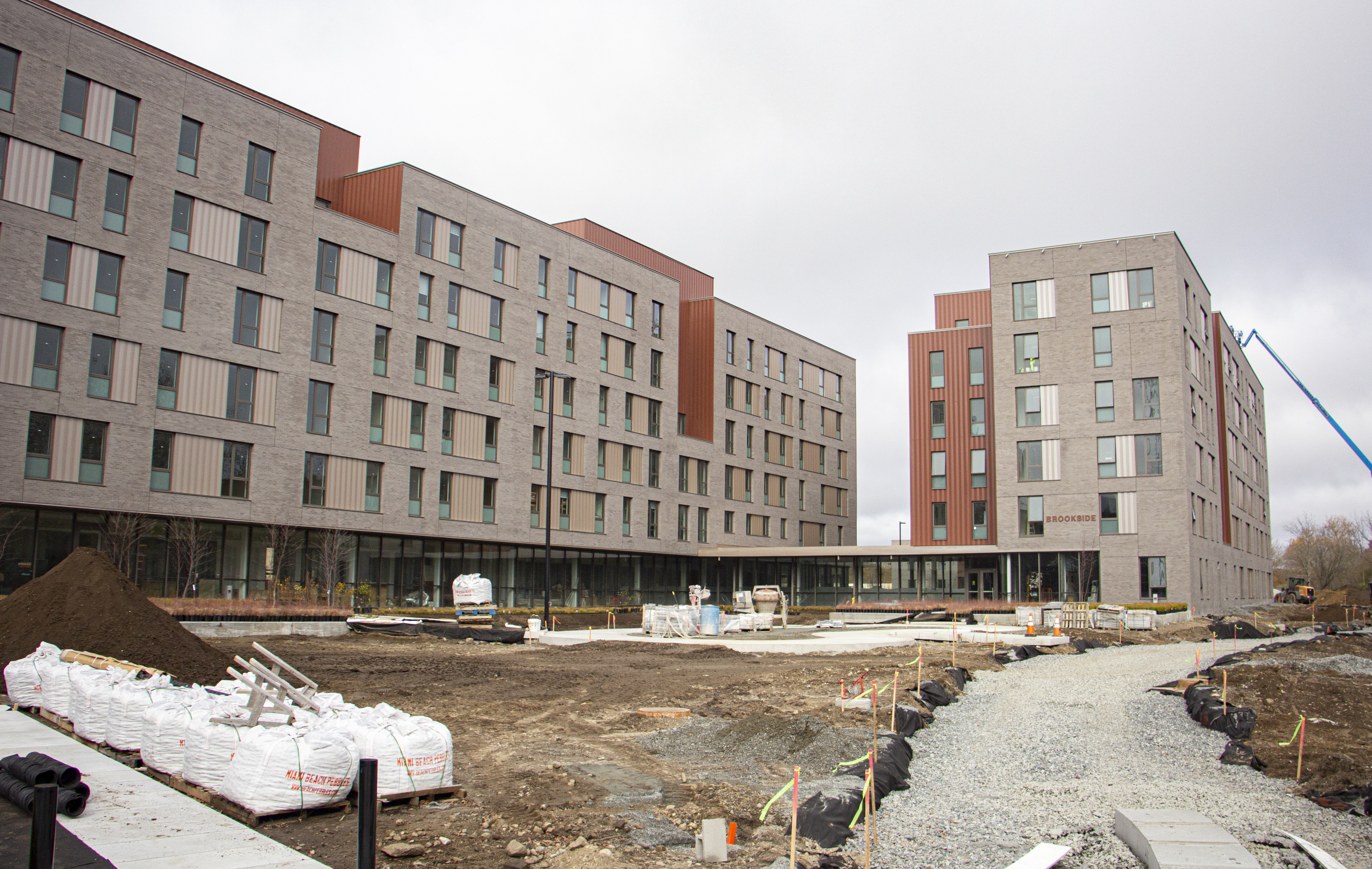 Academic credits earned will be averaged to establish priority

The Brookside Apartments are still under construction, however, Housing and Residential Life recently began accepting applications for potential residents for the spring semester. Photo by Greg Clark.

The University of Rhode Island’s Department of Housing and Residential Life (HRL) recently opened the application period for students to live in the new Brookside Apartments next semester.

Brookside consists of apartment-style suites of four or six single rooms. Each of these are fully furnished and include a kitchen, living room and two bathrooms. The building will hold approximately 500 beds.

Residents may also have access to a Brookside parking lot outside of the complex. The Brookside Bistro, a small eatery inside the apartments, will be featured on the bottom floor with both public access and resident access. Brookside also offers direct access to the William C. O’Neill Bike Path.

The application became available on Oct. 22 at 9 a.m. According to HRL Director Frankie Minor, by 4 p.m. that day, they had already received nearly 200 applications.

Students can apply in groups of four, two or one. HRL emphasized in the email sent to all students that Brookside has six-person suites but the majority of the rooms are designed for four people. Because of this, groups of four are highly encouraged to apply. The cost per student is $5,245 a semester.

After students apply and the applications close, they will receive an assignment time which will allow them to pick their room. According to Minor, the typical credit-determined picking system will be modified to take an average of all the applicant’s credits. This will avoid upperclassmen with many credits being able pick a room with underclassmen with less credits, making it more fair for everyone applying.

Minor and other members of HRL spoke with the Community Leadership Board, consisting of resident advisers (RAs), resident academic mentors (RAMs) and members of URI’s Student Senate to receive their input on this new room choice system.

“There’s a modification to how we’ve done it in the past,” Minor said. “It seemed unfair for people who felt like they should be eligible. ‘Why are people with less credits getting in when I couldn’t get in?’ Now we’re going to add all of our credits together, come up with the average, and that’s what’s going to establish your priority.”

Minor also encouraged students that are currently living off-campus to apply to live in Brookside.

“In the past, if you moved off-campus we’d put you to the end of line,” Minor said. “If we have space for you we’d put you back in. Part of this, to my understanding, was to provide more opportunities for older students who wanted to live on-campus. We’ve had a number of students who have already expressed interest who are currently living off campus and want to move back on campus.”

While students who are in their first year are not currently allowed to apply, they may be allowed to if not enough spots fill by the time applications close in early November.

HRL is currently in the process of obtaining a certificate of occupancy from the state. This proves that the building is substantially done and acceptable for students to live in. If they can obtain this in December, HRL hopes to begin moving students in at the end of final exams. If this is delayed, Minor said the University will allow students to move in a few days early at the start of the spring semester.

“Our anticipation is that we won’t have any students moving from Garrahy or Wiley, the accommodations are similar,” Minor said. “We do think that some of the students in Eddy or some of the other halls may begin to move. What we really anticipate that a lot of the students living in the Roger Williams Complex will probably be our highest number.”

Junior Kelsey Degnan currently lives in the Gateway Apartments, but submitted an application for Brookside with her three other roommates.

“We had wanted to move into Brookside when we thought it was going to be done for fall, so we got all excited about it last semester,” Degnan said. “Since it is a new building, being able to live somewhere where no one has lived before is nice. Totally clean bathrooms, nothing’s been touched before. It’s just kind of something you don’t really get the opportunity to do in many other situations.”

Sophomore Emma Hayes is frustrated with Brookside’s regulations for applying.

“I was interested in moving into Brookside because I currently live in a five-person suite,” Hayes said. “I’m in a triple for the second year in a row. It’s very frustrating to accommodate three people’s needs in a small space and I thought that Brookside would be perfect for our group but you can’t really select a group bigger than four, so that was challenging.”

The Brookside application will remain open for students to apply until Nov. 4 at 4 p.m., and the room selection process will follow soon thereafter.