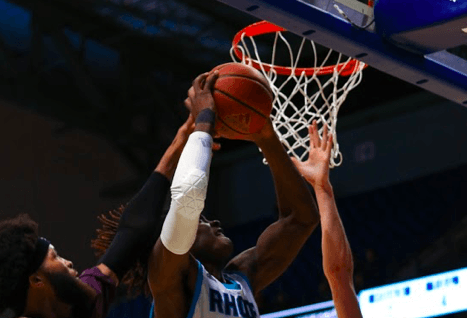 Where there is talent, there are expectations, and for Rhode Island Men’s Basketball, there is both.

Following a 2018-2019 campaign that saw both valleys and peaks, all contributors from last year’s team return, with a new influx of both freshman and transfer player talent as well. The Rams are locked and loaded for a special year in Kingston under second-year Head Coach David Cox.

In his first year as head coach, Cox guided a young team full of question marks through trial and tribulation, ultimately leading them to an upset victory over VCU in the Atlantic 10 tournament, before being knocked out by St. Bonaventure in the semi-finals.

Fast forward to the present, URI was picked to finish fourth in the A-10 preseason poll, with only VCU, Davidson and Dayton ahead of them. The top of this conference is sure to be tightly contested, with the top four all oozing talent up and down their rosters. They have also all scheduled the necessary non-conference slate games to get ready for A-10, and potentially postseason play.

Rhode Island’s own early season schedule is rife with resume builders for the NCAA selection committee to chew on come March. Dates against teams such as preseason top-10 Maryland, Alabama, LSU, West Virginia and in-state rival Providence College have set the Rams up for plenty of opportunities to steal victories against teams that should be in play come March Madness.

On paper, URI’s roster is as talented as they come in the A-10, with senior big man Cyril Langevine taking home both first team and defensive team preseason honors, senior guard Jeff Dowtin getting the second team nod and junior guard Fatts Russell rounding it out with a third team honor. The Rams are the only team in the conference with a representative on all four preseason teams in the Atlantic 10. For Rhody, the expectation is very much so NCAA Tournament or bust.

The first taste of Rhode Island basketball on the Ryan Center floor took place this past Saturday, with the Rams taking on Rhode Island College in an exhibition game. Rhody controlled the game from the tipoff against the in-state Division III team, winning 93-55.

“Our defense was solid,” said Cox. “Our offense was solid, I thought we moved the ball relatively well. Played with great pace. Ultimately we’ve got to shoot the ball a little bit better.”

It was sophomore guard Tyrese Martin who paced URI offensively, pouring in 22 points on 9-13 shooting, also going 2-4 from beyond the arc. The incoming freshman class were also able to play in front of the Rhode Island faithful and get their first taste of real game action. Gregory Hammond, Jacob Toppin and Mekhi Long all played good minutes in their Rams debut, with the highlight of the night coming from Toppin throwing down an uber-athletic 360 dunk.

“I thought they played pretty well,” said Cox. “There were some nerves obviously. It was good for Jacob to get that breakaway and show off his athleticism. It was good for them to get out here in front of the crowd and get through the game.”

Two players for Rhode Island who are anticipated to make a sizable impact are transfers Jermey Sheppard and Antwan Walker. When exactly that is currently is in limbo, as both players are still going through the waiver process of the NCAA.

“They’re in the waiver process,” said Cox. “We’re just waiting to hear. We’re anticipating that it will come before the season. We’ll figure it out though and just roll with the punches.”

The Rams eyes are now set on Long Island University, with the official season opener taking place at the Ryan Center on Tuesday, Nov. 5.